911 agencies, Emergency medical services (EMS), and first responder agencies play a critical role in major disease outbreaks because they are a gateway to the overall healthcare system for a wide spectrum of patients who use 911 as their first point of access. For those patients, emergency dispatchers and emergency prehospital responders are the first professionals to communicate with, treat, and provide hospital transport for, patients who are infected with communicable diseases. Public health agencies such as the Centers for Disease Control and Prevention (CDC) at the national level, and state and county health departments at the local level, or provincial health ministries in Canada, are responsible for developing the strategy and setting the policies and practices for managing disease outbreaks, infected patients, and those suspected to be infected. Members of these two professions – emergency services and public health – don't necessarily interact on a routine basis, and differ substantially in the focus of their work. Given this reality, the recent Ebola outbreak tested the abilities of these two disparate groups to work in concert, in an effective and seamless effort to contain the spread of a novel disease. 911 centers in particular often receive little attention when it comes to a comprehensive public health response to disease outbreaks. Nevertheless, a critical role can be played by 911 agencies willing to review and modify day-to-day operations to contribute to the overall effort of specific disease information gathering as well as responder notifications.

During the summer of 2014, public health authorities around the world became alarmed over the rapid spread of a strain of Ebola Viral Disease (EVD) that had become widespread in several West African countries. By July 30, 2014, Guinea, Sierra Leone, Liberia, and Nigeria had together reported confirmed and suspected case counts totaling 1,440, with 826 reported deaths. On August 8, 2014, the World Health Organization (WHO) announced that this EVD outbreak was the largest ever recorded, and declared it a Public Health Emergency of International Concern. By August 26th, the case count had reached 3,069, with 1,552 deaths – all in a handful of West African countries.

But on September 30, 2014 the crisis suddenly reached a new level when the first case of EVD diagnosed in the United States was reported in Dallas, Texas, in a patient who had recently traveled to the United States from Liberia. Since one of the patient's close acquaintances had called 911, and the patient was subsequently transported to the hospital by a Dallas Fire Department paramedic crew, the issue of prehospital care management of EVD cases was placed immediately into the public health – and media – spotlight. Following the Dallas case, the CDC moved quickly to implement a series of public health policies and procedures aimed at preventing the spread of the disease in the U.S. population, and protecting healthcare and emergency services workers who may come in contact with Ebola patients.

On August 26, 2014, the CDC, recognizing the value of emergency services – including 911 agencies – in dealing with a disease outbreak, posted its first version of a document entitled "Interim Guidance for Emergency Medical Services (EMS) Systems and 9-1-1 Public Safety Answering Points (PSAPs) for Management of Patients with Known or Suspected Ebola Virus Disease in the United States." The primary goal of this document was to provide nationwide direction for prehospital and public safety professionals to follow standardized protocols and procedures for patient management and treatment of suspected EVD patients from the first point of contact with a public safety or healthcare professional, to final discharge from a medical facility. For 911 agencies (PSAPs) the CDC's recommendation was for local authorities to direct emergency dispatch agencies to use "modified caller queries" about Ebola when the risk of Ebola becomes elevated. Specifically, 911 callers should be queried about:

· travel to or from an Ebola-infected country

· signs and symptoms of Ebola, such as fever, diarrhea, vomiting, etc. and

· Other risk factors, such as contact with someone who is sick with Ebola1

The CDC's "Interim Guidance" was a good framework document for 911 agencies, yet for 911 centers to operationalize this recommended practice, required a specific calltaking protocol format, with scripted, ordered questions and instructions to use when receiving calls that involve potentially infected patients. To fill that need, the International Academies of Emergency Dispatch (IAED) took up the task of modifying its existing tool – the Severe Respiratory Infection (SRI) Tool – for querying 911 callers regarding infectious diseases.

The IAED's Chemical Biological, Radiological, and Nuclear (CBRN) Fast-Track Committee – a subcommittee of the IAED Medical Council of Standards – was assigned the responsibility of creating a new template to address the points in the CDC's guidance document. Formed shortly after the 2003 SARS (Severe Acute Respiratory Syndrome) outbreak in North America, the committee is made up of emergency medical services (EMS), public health, and 911 professionals, whose primary goal is to identify and evaluate emerging public health or public safety threats, and develop or update relevant emergency dispatch protocols and procedures for managing those threats.

The group's biggest challenge during any novel disease outbreak is to stay ahead of the rapidly changing course of the disease, through a process of constant monitoring, teleconferencing and electronic communication among group members.

The committee had previously developed the SRI Tool for use in an outbreak of a flu-like, respiratory illness, such as SARS in 2003, or the H1N1 influenza pandemic in 2009. The SRI Tool was a useful template as a starting point, but EVD is categorized as a viral hemorrhagic fever, with a different pathology than these previous novel virus outbreaks. Further, the fact that EVD was transmitted through direct body fluid contact with a symptomatic patient as opposed to airborne transmission of the previous respiratory disease outbreaks, and the geographical concentration of the disease in West Africa, meant that specific caller/patient queries needed to be developed for detection of potential EVD patients. After reviewing the CDC recommendations, receiving input from user agencies, and discussing the content, wording, and ordering of specific questions and instructions, a final draft was developed by October 18th, less than three weeks after the first North American case had been confirmed in Dallas. The final version of the new protocol tool – renamed the Emerging Infection Disease Surveillance (EIDS) Tool (SRI/MERS/Ebola) (Figure 1) – was released to North American users on October 20th, and a week later the software version was released. It was also released to other countries in numerous languages shortly thereafter.

Having been involved in the IAED CBRN committee, and participating in conference calls with the CDC, NHTSA (the National Highway Traffic Safety Administration), the Paramedic Chiefs of Canada – and numerous conversations with dozens of 911 agencies whose managers, medical control authorities, and dispatchers, worked long and hard to implement an effective dispatch response to EVD – I am confident in saying there has been a widespread acknowledgement from all of the above stakeholders as to the importance of 911's role in the response to an emerging disease outbreak.

Thankfully, EVD has not spread in North America, largely due to the rapid and well-coordinated actions of the key players at the national, state, and local levels - not the least of whom are our emergency responders and emergency dispatchers. It is clear therefore, that 911 centers, responder agencies, and public health can work together to implement a successful prehospital response for emerging disease outbreaks. National public health authorities from the CDC were able to provide guidance for emergency services, including EMS and 911. Specific protocols and procedures can be provided by an international standard setting organization, such as the IAED, if it moves quickly to respond to the public health emergency at hand.

Finally all stakeholder agencies must maintain an open line of communication, and be flexible enough to adjust and react to rapidly changing circumstances with well thought out actions. 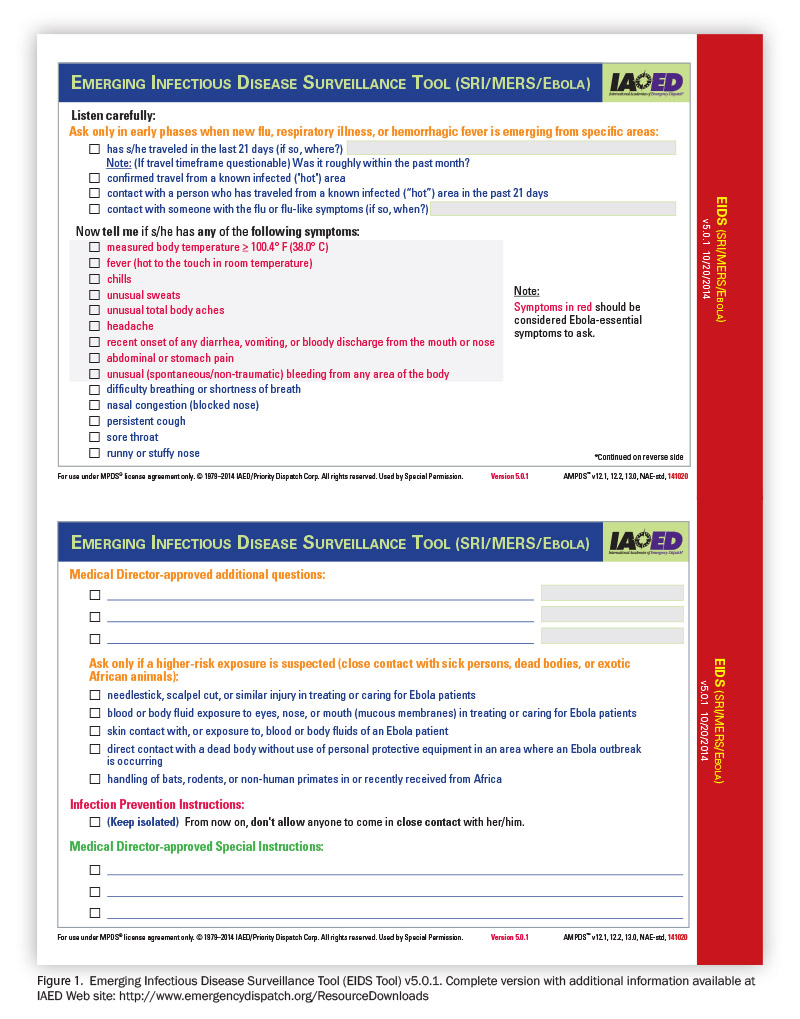