HOW DO I UNDERSTAND A RESEARCH PAPER?

Reading a research paper can be very different from reading a book or a magazine article. With most types of books or articles, you start at the beginning and read all the way through—but that’s not how most researchers read a research paper. In many ways, reading a research paper is more like reading a textbook. Headings and subheadings provide a roadmap to find the specific information you need, while figures and images offer a quick overview of the main points. In general, each research paper presents the findings of one specific study, so the headings reflect the elements of the research process, generally including Introduction, Methods, Results, and Discussion/Conclusion. Most also begin with an abstract, which is a summary of the main points of the study. Because researchers (like dispatchers!) tend to be very busy, and because they read studies for information rather than just for pleasure, they often only read parts of the paper in depth. They might skim or skip other sections altogether, depending on their purposes and needs. Most often, researchers read each other’s articles to answer one of these questions:

The question you are trying to answer determines, to a large extent, what part or parts of the research paper you’ll be most interested in reading. Here are the major sections.
Abstract
Introduction
Methods
Results
Discussion
Takeaway

Learn more about each of the sections and what you can gain from reading (or skimming) each of them.

WHAT IS THE DIFFERENCE BETWEEN QUALITATIVE AND QUANTITATIVE RESEARCH?

Most research falls into one of two categories: qualitative or quantitative. Quantitative research is what most people think of when they hear the term “research.” The term “quantitative” refers to quantity, or measurement. In other words, quantitative research is any kind of research that measures something that can be described as a number. Studies that present statistical analyses, time measurements, or measures from technical instruments (such as blood pressure readings) are quantitative. Qualitative research reports on people’s perceptions of things, so it is often reported in terms of words and phrases. A focus group, for example, might be asked to explain how they feel about a new product or service. Similarly, a group of medical directors might be asked to describe their process for instituting changes in their communication centers. These studies would be qualitative because they report on the aspects of a phenomenon that cannot be reported or understood as quantities. Very often, the same topic could be researched from either a quantitative or a qualitative perspective. Here are a few examples:

As you can see, the difference between quantitative and qualitative research is not about what topics or issues the research addresses. Many emotional and psychological topics are studied with extremely rigorous statistical analysis based on tested instruments (surveys or psychological evaluation questionnaires, for example), while some of the most important recent studies about “hard science” topics have been qualitative studies dealing with the public’s reaction to or understanding of those topics. In fact, “mixed methods” studies, which use both, can be very effective in ensuring that we capture both what is quantifiable and what is not. For example, a study evaluating the effectiveness of a new policing method in reducing property crime in an area would be even more effective if it also reported on the community’s reactions to the new approach. No matter what type of research you are doing, it is worth considering how both methodologies might deepen your understanding of your subject.

WHAT SHOULD I KNOW ABOUT TABLES AND FIGURES?

Most research papers—but especially quantitative studies—report some or all of their findings in the form of tables and figures. Good tables and figures can be so clear and direct that the reader gets most of the important information about the study from the images alone. However, sometimes the complexity of the subject matter, the necessity of reporting various statistical terms, or ineffective design can make these types of reporting images hard to interpret. Here, we will briefly review some of their key points so that you can make sense of the research papers that you read. The first thing to know is that while both tables and figures may be used in the same paper, the terms are not interchangeable. A table is always laid out in rows and columns. Most often, a table presents numerical findings (but not always). A Figure, on the other hand, is a graphical representation. If the table is a representation of numerical findings, is designed to show trends or patterns in the data, not the numbers themselves. Line graphs, bar graphs, and pie charts are all examples of figures. In most journals, the term “figure” also refers to any other type of graphical representation, such as photographs or screenshots. What are Tables and Figures Used For? In addition to presenting information differently, tables and figures are used for different purposes in research reports. Tables are used when the precise number of things really matters. They are also used when there are lots of categories, which can be difficult to manage in a graph. For example, many research papers use a table to provide basic demographic information about their participants, such as their genders, races, ages, and so on. This is a lot of information that is not all related in one trend or pattern, so a table works well. Similarly, tables are often used to break down a large population into groups, such as the following table that shows how many of each priority level of call were handled at each of the agencies being studied: 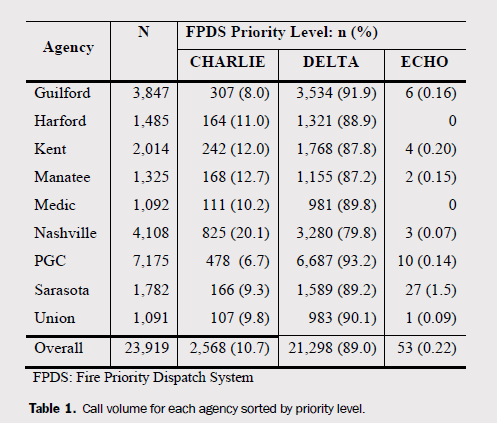 Figures, on the other hand, are used not to list things, but to show insights into them—to show the reader how they directly compare with one another, how they are trending, or how they relate to one another. Tables don’t do this as well because the reader has to keep all the numbers in mind at once, while with a figure, the trend is visually obvious. For example, the figure below shows how many calls were prioritized at each time point. This works well as a figure because the point is the trend: 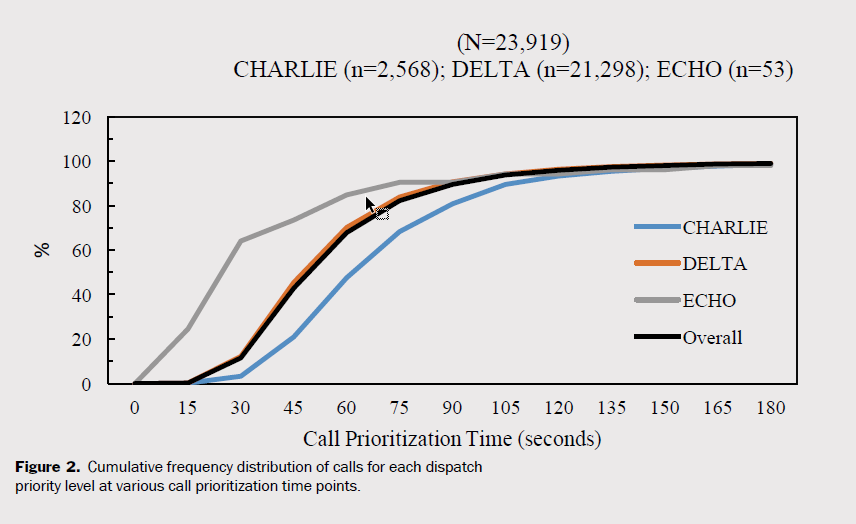 In short, if you’re writing (or reading) a research paper, remember that a table is used for elements that are discrete, meaning that you want to know the exact, specific, separate number for each element. The number of people in the sample who fell into each demographic category is a common type of table. Figures, on the other hand, are generally used to convey connected elements—to show the relationship between those elements in a visual fashion. The number of people who experienced stress as their time on shift increased, for example, would make a good figure, since the graph would show the relationship between the two variables. How to Read a Figure While tables are often self-explanatory, with labeled rows and columns of text and numbers, figures can sometimes be harder to read. The key to understanding figures, especially graphs, is to look at the relationship between the X axis (the bottom line) and the Y axis (the vertical line to the left). The X axis and Y axis are always labeled, and the labels refer to variables in the study. The variables are things that changed or were measured. In the figure above, for example, the two variables are TIME (Call Prioritization Time, measured in seconds) and PERCENT (the percent of all calls). Once you know which variables are being measured or presented in the graph, the next step is to understand their relationship. What insight about their relationship is the graph trying to show you? In the graph above, the relationship between TIME and PERCENT OF CALLS is that, as time goes up, a larger and larger percentage of the calls have been completed. Since “time” in this case means Call Prioritization Time (the amount of time it takes to achieve a final determinant code for the case), the graph is showing us that by the time we get to 75 seconds, almost a full 100% of all the calls have been assigned a code. It also shows us that very few calls are prioritized in under 15 seconds—and almost all the ones that were prioritized that quickly were ECHO calls. As you can see, while we might not know the precise number of seconds for each call measured in the study, the graph gives us a very clear understanding of the trend—that most calls are prioritized in under 75 seconds and that there is some variation in times by priority level. If we had a table listing all the hundreds of calls with their individual times, we wouldn’t be able to make any sense of it. Using a figure (in this case, a graph) makes the insight visible and clear.