Every year 350–400 people die in submersed vehicles in North America,1, 2, 3 with these deaths accounting for up to 10% of all drownings.4 Vehicle submersion has the highest fatality rate of any type of single vehicle accident.5 In the past, emergency dispatch protocols for sinking vehicles either have been non-existent or were ineffective to deal with this rapidly deteriorating situation, in which a vehicle can fill with water and sink completely (if the water is deep enough), because with this type of incident, emergency response times are usually much longer than the period in which a victim drowns.6, 7, 8

In 2010, the International Academies of Emergency Dispatch® (IAED™) commissioned a Vehicle Submersion Subcommittee to create an evidence-based revision of the Sinking Vehicle Protocol. The subcommittee was formed in 2011, and a final protocol was approved by the Fire Council of Standards in 2013. The new Sinking Vehicle Protocol shifted the dispatcher priorities from establishing location to instructing victims on how to self-rescue and exit the vehicle before it sinks.9

It was recognized, however, that this protocol was not completely adequate for one specific subset of vehicle submersions: vehicles stranded in floodwater. These incidents occur either due to flash flooding, or more tragically when drivers purposely enter water on a low-lying, flooded road, thinking they can drive through the water. Vehicles can stall and be stranded on the road, or more dangerously, they can float, drift with the current into deeper water, and sink, resulting in more than 50 drownings per year.10 Although much of the Sinking Vehicle Protocol is applicable to these situations, there are specific factors that needed addressing. In response to this need, in 2013 the Vehicle Submersion Subcommittee was asked to create a new evidence-based "Vehicle in Floodwater" protocol. The protocol was created based on a combination of published research (primarily from the Netherlands,11, 12, 13, 14, 15 Operation STAR,16, 17 University of Oklahoma,18, 19 and University of Manitoba20, 21, 22, 23, 24), survey results, and, when necessary, reasoned, logical expert advice. The final protocol was approved by the Fire Council of Standards and was introduced in the revised Fire Priority Dispatch System (FPDS®) in October 2013 and is also included in the police (PPDS®) and medical (MPDS®) protocols, starting with those released in 2015.

The new protocol follows recently created, and commonly accepted, public advice regarding a vehicle in water,25 which includes: don't panic, do not use your cell phone, and follow four action points (SEATBELTS off; WINDOWS open or broken; CHILDREN released from restraints; and OUT immediately). Since sinking vehicle occupants may still call 911 for assistance, the new protocol follows the principles of this advice in order to promote rapid self-exit and survival.

There are several similarities between the Sinking Vehicle and the new Vehicle in Floodwater protocols, including: the need to exit the vehicle quickly; the fact that electric windows should work if engaged quickly; the reminder that, if necessary, windows should be broken before water rises high enough to push against them; the fact that children should be helped from the oldest to youngest; and the need for children to exit before adults.

However, there are several important differences. One main difference in perspective is that with a vehicle sinking in deep water, it is obviously advantageous for the vehicle to float as long and high as possible. However, with a vehicle stranded (e.g., stationary) in floodwater, survival is more likely if the vehicle does not float, as it will then drift to areas of higher water. Also, with the Vehicle in Floodwater Protocol, although windows are the first choice for exit, doors may also be considered. Finally, while the Sinking Vehicle Protocol instructs occupants to get out into the water, the Vehicle in Floodwater Protocol instructs occupants to avoid the water and get up on the roof to wait for rescue if possible.

The following sections address issues that required supporting evidence during the preparation of this new protocol. The final section describes the protocol in detail and lists the level of recommendation for each step. 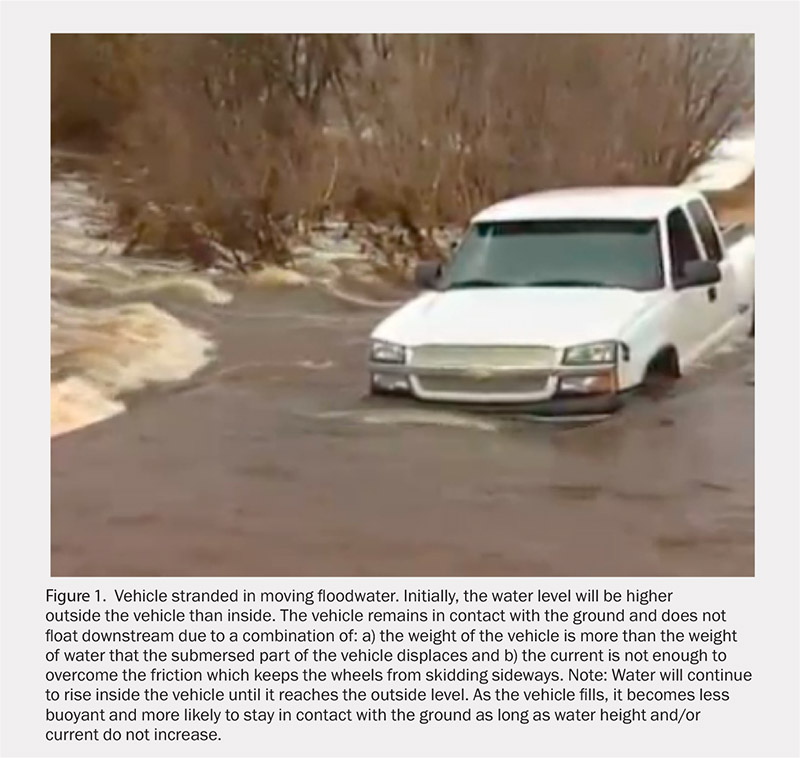 A vehicle sinking in deep water will fill completely with water within 3–8 minutes; however, the windows can only be opened within the first minute or so, until water rises high enough to push against the windows.27 Thus the Sinking Vehicle Protocol instructs the occupant(s) to exit through any window(s) into the water as quickly as possible (preferably within one minute) and then hold on to the still-floating vehicle until ready to swim to shore. A vehicle that is stranded in floodwater, by definition, is in contact with the ground/road and is not floating or sinking for the moment; therefore, the goal should be to exit, but avoid the water and get on the roof to wait for rescue.

Buoyancy and floatation are an advantage in a vehicle that is sinking in deep water (to increase survival time). Conversely, it is actually preferable for a vehicle stranded in floodwater to not float but remain in contact with the submerged road and not drift into deeper water (Fig. 1).

Whether a vehicle floats and/or is pushed off the road depends on buoyancy and on the force of any current acting against the friction of the vehicle on the road.28

The buoyant force, which determines whether a vehicle floats, depends on the ratio of the total vehicle weight divided by the weight of the water displaced by the vehicle (e.g., at or below the water line). The more water that enters the vehicle, the less buoyant it is. Thus, when a vehicle is stranded in floodwater, if the floodwater level outside the vehicle is rising, there will be a tendency to float the vehicle off the road, and it will be vulnerable to floating downstream to deeper water. Conversely, as water fills the passenger compartment (e.g., through vents, holes, etc.), the vehicle will become less likely to float and be washed downstream.

The ability of a vehicle to remain stable on a submerged road will therefore depend on having enough downward force against buoyancy to not float, and enough friction to prevent water current from pushing it sideways off the road into deep water. A car with no water in it can float in as little as 36–60 cm (14–24 inches) of calm or slow-current water; in this case, even a slow current will then push the car off the road to areas where the water is deeper and the car will sink.29, 30 As water fills the car, it will become less buoyant, and it will take a higher water level for it to float. Thus, if all other factors remain the same (e.g., floodwater does not rise or flow faster), the vehicle will become more stable with time as it fills with water. Trucks will usually require deeper water to float, as they are generally heavier and higher off the ground.

In addition to buoyancy, the ability of water to push a car off a road also depends on the flow rate of the water and the surface area of the vehicle it pushes against. Since most vehicles are driving on roads which cross waterways, they are often perpendicular to the direction of flow, so the water contacts a side of the vehicle. Once the vehicle drifts with the current, it will usually turn parallel with the current with the heavy end (usually the front, engine end) pointing downstream (like a weathervane).

As water velocity increases, a vehicle can be pushed off the road in shallower water (for a passenger car, in as little as 15 cm [6 inches] of water in a very high current).31, 32 In situations where water current itself poses other threats, such as washing occupants downstream against dangerous objects, it is still important to exit the vehicle quickly (in case it does become dislodged and moves to deeper water), but it is generally safer to get on the roof and wait for rescue. This negates the risks of being swept away from the vehicle into deeper water or being struck by, or entangled in, drifting debris. In this case it's best to wait on the roof for rescue as long as the vehicle remains in place and is not sinking.

Doors on the upstream side of the vehicle will be virtually impossible to open because of the initial pressure difference caused by higher external water levels. Even if the water levels equalize across the doors, the current will still be pushing against them. Finally, if an upstream door could be forced open, the current would slam the door shut as soon as the occupant stopped pushing it open; this could cause injury or trap a body part in the closed door.

The Vehicle Submersion Subcommittee determined that window(s) on the upstream side of the vehicle would be the best route through which to exit and get on top of the roof. Exiting through a window while trying to stay out of the water is a difficult task, but if the occupant falls while exiting an upstream window, the water will push him/her back against the vehicle, and another attempt can be made. If contact is lost when exiting a downstream window, however, the occupant will likely be washed downstream. Water flowing in through the open upstream window is not a concern, as the vehicle will usually float and drift long before the water level reaches the windows.33

The second choice would be to try to open a door on the downstream side of the vehicle. There would be no current against the door and the task would become easier with time as the water rose inside the vehicle, decreasing the pressure gradient against the door. The open door can also provide a structure to climb on when getting to the roof. Also, one counterintuitive benefit of opening the downstream door is that it will allow rapid equalization of water levels inside and outside the vehicle, thus making it less buoyant, more stable, and therefore less likely to drift off the road to deeper water.

Third, although there are difficulties with exiting through a downstream window, these risks are outweighed by the need to get out of the vehicle and on the roof in a timely, safe manner if attempts through the other exits are not successful. Exiting through front or rear windshields is also an option, but they cannot be shattered because they are laminated, and it is very difficult to kick them out.34 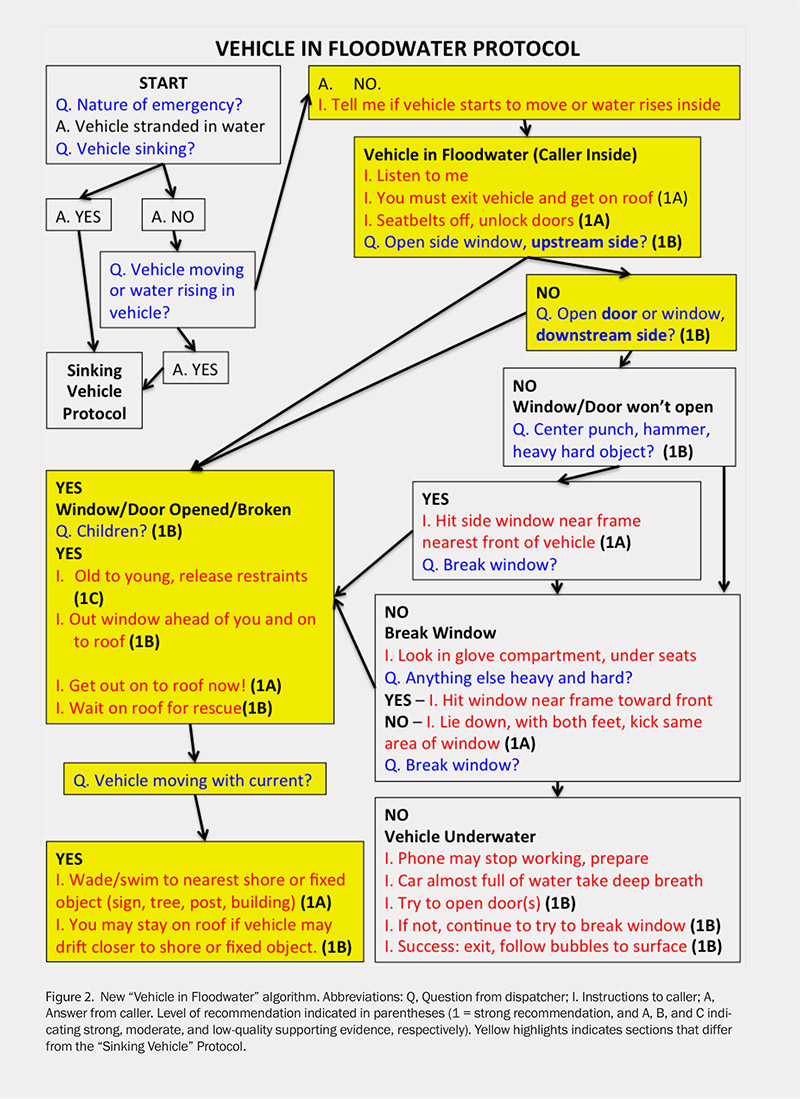 The new Vehicle in Floodwater Protocol should prevent drowning deaths for occupants who call emergency dispatch from a vehicle stranded in floodwater. In this scenario, the highest probability of survival is for the occupant(s) to exit the vehicle and wait on the roof until a rescue team arrives. As more emergency dispatch agencies enact the new protocol, future research can determine whether survival rates increase for those stranded drivers who call for emergency services. Meanwhile, efforts should continue to be made to educate the public that they should never drive into water (e.g., on a flooded road) and that they should avoid low-lying areas in times of heavy rain and/or flooding. They should also be reminded to first perform the modified four-step self-exit process: SEATBELTS off; upstream WINDOW open or broken (lower priority choices are the downstream door or window); CHILDREN released from constraints (from oldest to youngest); OUT immediately and on to the roof. Only then should they use their cellphones to call for rescue.

Most, but not all, instructions are based on scientific evidence, while remaining aspects are based on experiential observations and/or logical decisions. Future research and experience could potentially provide evidence to further improve the quality of this new protocol.

Thanks go to our funder, the Natural Science and Engineering Research Council (NSERC) of Canada.

Citation: Giesbrecht GG. The evidence base for a new 'Vehicle in Floodwater' emergency dispatch protocol. Annals of Emergency Dispatch & Response. 2016;4(2):7–11.