The early surveillance system for widespread transmission of infectious disease.

In 2003 the International Academies of Emergency Dispatch® (IAED™) created the Severe Respiratory Infection (SRI) Tool in response to the SARS pandemic that year, when multiple cases were reported in Toronto, Ontario, Canada. Then in 2009, an electronic version of the tool was developed for ProQA® dispatch software and deployed in multiple dispatch agencies during the 2009 H1N1 (swine flu) pandemic. This tool was later modified in response to the Ebola outbreak in 2014 and became what is known today as the Emerging Infectious Disease Surveillance (EIDS) Tool.

The EIDS Tool enables EMS authorities to implement an enhanced medical dispatch caller screening protocol for a specific disease outbreak for surveillance purposes only—a practice that does not require the reduced response levels or alternate dispositions that may be necessary at a later stage when the disease outbreak becomes severe enough to create a major strain on local health care resources. Providing advance notice of potential widespread community transmission of infectious disease means more time to get out ahead of a potential outbreak, mobilize critical resources, prepare responders before they get on scene, and avoid being taken by surprise.

The EIDS Tool has two modes: Surveillance Mode and Trigger Mode. When used in Surveillance Mode, the EIDS Tool enables dispatch agencies to record findings to help monitor the spread of an infectious disease. Once an outbreak or epidemic is confirmed, the EIDS Tool is switched to Trigger Mode, where a positive answer to three or more questions activates a warning to alert the emergency dispatcher that there is a reasonable likelihood of an infectious disease so that responders on the scene can be alerted.

While the EIDS Tool was widely used during both the swine flu pandemic and the Ebola outbreak, its largest deployment has been during the current COVID-19 pandemic. For the first two months of this pandemic, from March 1st to May 1st, 2020, dispatch agencies sharing data with the IAED Data Center used the EIDS Tool on over 100,000 calls. To put this into context, these agencies handled a total of 404,664 calls during this period, which means that the EIDS Tool was used on approximately 1 out of every 4 calls over the first two months of the pandemic.

In order to examine and evaluate the effectiveness of the EIDS Tool, the IAED Research Team undertook a survey to gather input regarding users' experiences and level of satisfaction. There were 136 unique respondents from both single and multiple-discipline users of the protocols. The researchers conducted both quantitative and qualitative reviews of the survey responses (the latter comprised of a thematic review and coding of free text responses).

When community spread was uncertain, and the need to know was at its highest, the EIDS Tool provided the dispatch center and EMS authorities with an effective, straightforward way to monitor and potentially help mitigate the spread of COVID-19 in the communities they serve and protect the responders on scene. 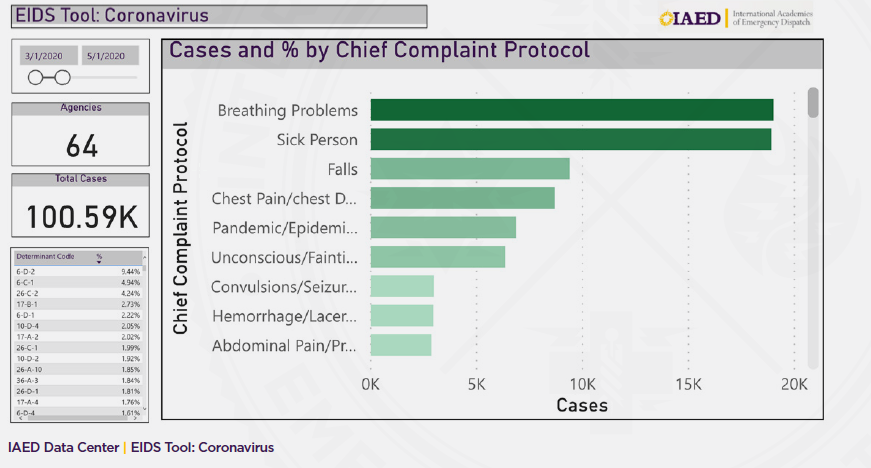