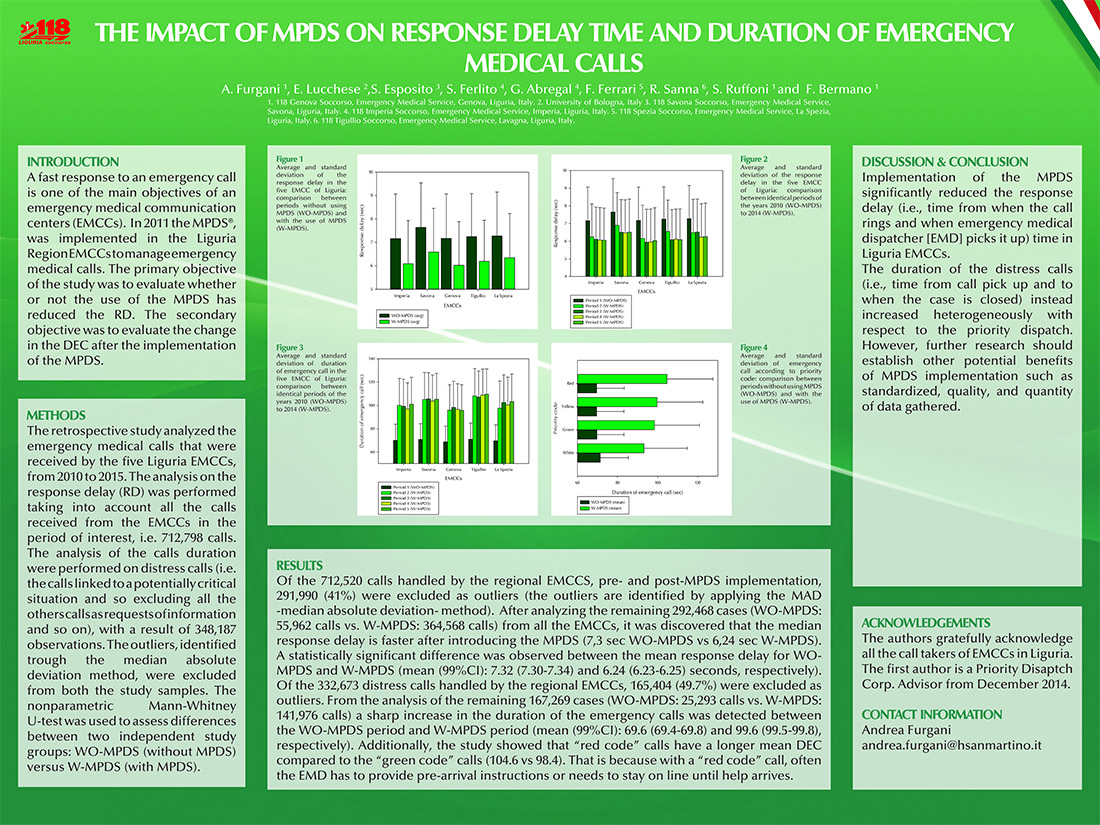 Introduction: A fast response to an emergency call is one of the main objectives of an emergency medical communication center (EMCC). For decades, Italy had no formal emergency medical dispatch system to triage and respond to emergency calls. Instead, it used healthcare providers such as nurses to triage and respond to such calls. In 2011, a scripted logic-based dispatch protocol system, the Medical Priority Dispatch System™ (MPDS®), was implemented in the Liguria Region EMCCs in Italy to manage emergency medical calls. However, response delay time (RD) (i.e., time from when the call rings and when emergency medical dispatcher [EMD] picks it up) and duration of emergency call (DEC) (i.e., time from call pick up and to when the case is closed) have not been previously studied in this region. The criticality associated with each distress call is classified into four priority codes: Red (very critical, life-threatening, maximum priority, immediate treatment situations), Yellow (fairly critical, evolving, possible life threatening situations), Green (low critical, not evolving, deferrable situations), and White (non-critical situations, non-urgent patients).

Methods: The retrospective study analyzed the emergency medical calls that were received by the five Liguria EMCCs, from 2010 to 2015. The data were extracted from a common database maintained by the regional EMCCs. STATA/MP® (version 13) and IBM® SPSS® (Statistics for Windows: version 22.0 ©2013, IBM Corp., Armonk, NY, USA) statistical softwares was used for statistical data analysis, while SigmaPlot software (SigmaPlot: version 12 ©2011, Systat Software, Inc., San Jose California, USA) was used for graphics. The analysis on the response delay (RD) was performed taking into account all the calls received from the EMCCs in the period of interest, i.e. 712,798 calls. The analysis of the calls duration were performed on distress calls (i.e. the calls linked to a potentially critical situation and so excluding all the others calls as requests of information, request for patients' transportation and so on), with a result of 348,187 observations. The outliers, identified through the median absolute deviation method, were excluded from both the study samples. The nonparametric Mann-Whitney U-test was used to assess differences between two independent study groups: WO-MPDS (without MPDS) versus W-MPDS (with MPDS). The significance of the differences were evaluated at 0.05 level of significance. The outcome measures were the response delay to the calls and the duration of the distress calls received from the EMCCs.

Conclusion: Implementation of the MPDS significantly reduced the response delay time in Liguria's EMCCs. The duration of the distress calls increased heterogeneously with respect to the priority of dispatch. However, further research should establish other potential benefits of MPDS implementation such as standardization, quality, and quantity of data gathered. Also, the duration measured included provision of PAIs and reflected the total time taken on the call, not the time it took to dispatch a response to the call.