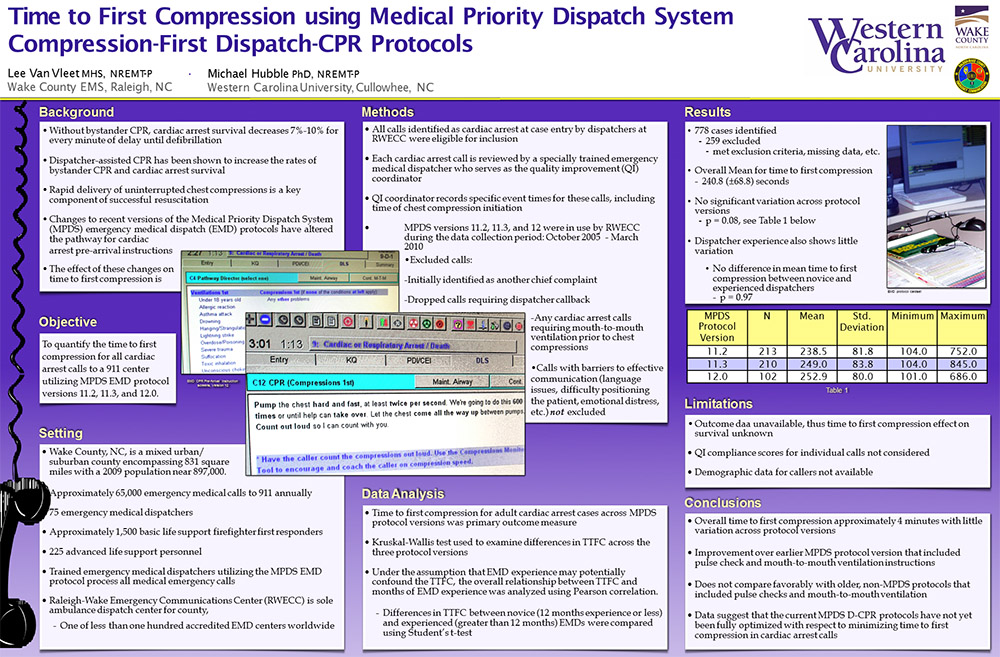 Introduction: Without bystander CPR, cardiac arrest survival decreases 7%-10% for every minute of delay until defibrillation. Dispatcher-assisted CPR (D-CPR) has been shown to increase the rates of bystander CPR and cardiac arrest survival. Other reports suggest that the most critical component of bystander CPR is chest compressions with minimal interruption. Beginning with version 11.2 of the Medical Priority Dispatch System™ (MPDS) protocols, instructions for mouthto-mouth ventilation (MTMV) and pulse-check were removed and a compressions-first pathway introduced to facilitate rapid delivery of compressions. Additionally, unconscious choking and 3rd trimester pregnancy decision-making criteria were added in MPDS versions 11.3 and 12.0 respectively. However, the effects of these changes on time to first compression (TTFC) have not been evaluated.

Objective: To quantify TTFC of MPDS versions 11.2, 11.3, and 12.0 for all calls identified as cardiac arrest on call intake that did not require MTMV instruction.

Methods: Audio recordings of all D-CPR events between October 2005 and June 2010 were analyzed for TTFC. Differences in TTFC across versions were compared using the Kruskal- Wallis test.

Conclusion: Following the removal of instructions for pulse check and MTMV, as well as other minor changes in the MPDS protocols, we found the overall TTFC to be 245 seconds with little variation across the three versions evaluated. This represents an improvement in TTFC compared with reports of an earlier version of MPDS that included pulse checks and MTMV instructions (315 seconds). However, MPDS TTFC does not compare favorably with reports of older, non-MPDS protocols which included pulse checks and MTMV (138-236 seconds). Our data suggest that, in comparison with other DCPR protocols, the current MPDS D-CPR protocols have not been fully optimized with respect to minimizing TTFC.