Introduction: Telephone nurse triage at the 9-1-1 dispatch point is relatively new in the United States despite its ability to significantly reduce expensive and scarce Emergency Medical Services (EMS) resource use and emergency department visits. A previous study investigated the distribution of 9-1-1-triaged call incident types within the Emergency Communications Nurse System (ECNS) and found that 9-1-1 triage systems yielded a variety of low acuity complaints that were handled by the Emergency Communications Nurse (ECN). This study explored the current and potential utilization for triaging low acuity calls transferred from 9-1-1.

Objective: To determine the utilization potential of a secondary nurse triage system in handling low acuity calls transferred from a 9-1-1 emergency dispatch system.

Methods: This descriptive, retrospective study involved two 9-1-1 communication centers in the United States of America (USA). The primary endpoints were the frequency of cases triaged using the ECNS, and the frequency of cases that could have been triaged based on the Medical Director-approved Emergency Medical Dispatch (EMD) determinant codes if the resources had been available to accept them.

Results: Overall, 2,728 cases were triaged using the ECNS. However, 35,579 ECNS-eligible cases met secondary nurse triage criteria. The majority (83%) of the 2,728 calls were transferred to the ECNS between 8am and 4pm.

Conclusion: The data clearly demonstrated that, for both agencies, there are a significant volume of low acuity Medical Priority Dispatch System calls that are eligible for nurse triage which are not being triaged using the ECNS. Each agency should explore costs and benefits of staffing their secondary triage desks for longer hours, particularly between 6pm and 11pm to maximize the opportunity to triage low-acuity patients to more appropriate to healthcare resources.

Nurse advice lines and telephone nurse triage have become increasingly popular as medical costs have risen worldwide. Telephone triage nurses answer questions about common medical symptoms and problems and help callers determine whether a patient needs medical care—and if so, how soon, and what kind.1 Many hospitals, medical practices, and insurance companies offer such services, in part to increase customer satisfaction and provide information during out-of-office hours, but also to reduce overuse, or inappropriate use, of expensive emergency and urgent care services.2 This is particularly important as Emergency Department (ED) overcrowding and overuse continue to escalate.3, 4 Therefore, an intervention that can alleviate this deteriorating situation would be a great asset in the delivery of effective and efficient emergency care at the ED.5, 6

Although telephone advice lines are common, as are nurse triage services connected with dispatch point is relatively new in the United States and abroad—despite the fact that such services can significantly reduce expensive and scarce Emergency Medical Services (EMS) resource use and ED visits, as long as its accuracy and safety can be assured.7 Hinchey et al concluded that 99% of EMS requests for service that were triaged as ALPHA (low-acuity priority level classification) by Emergency Medical Dispatchers (EMDs) using the Medical Priority Dispatch System™ (MPDS) did not meet high-acuity criteria and less than 1% of this cohort were transported emergently to the hospital.8 Neely et al suggested one innovative approach is to identify, at EMS dispatch level, callers with non-emergent needs who safely may be referred to a nurse advice telephone line or other alternative EMS service.9

The International Academies of Emergency Dispatch's™ (IAED's) Emergency Communication Nurse System™ (ECNS) is a protocol-driven system for integrating telephone nurse triage at the 9-1-1 dispatch point. Calls identified in the MPDS as low acuity by a trained and certified EMD can be transferred to an ECNS-certified nurse, who provides further triage and identifies the level of care needed by the patient (such as ED ASAP, Seek medical care within 1-4 hours, See doctor in the next 1-3 days, and so on). The nurse can also assist the patient in arranging non-EMS care by making appointments, sending alternate (non-ambulance) transport if necessary, and scheduling patient follow-up callbacks.

A previous study investigated the distribution of 9-1-1-triaged call incident types within the ECNS and found that the 9-1-1 triage systems studied yielded a variety of low acuity complaints that were handled by the ECN.10 The study also showed that the five most frequently used protocols made up approximately 87% of the cases transferred to the ECN by the EMD. Another study investigated the frequency of Recommended Care Levels (RCLs) by time of day and found that there was an increasing trend of referral calls to emergency department after hours which could be due to a lack of alternative transport or alternative resources being available during these hours.11 Therefore as a follow-up to that study, the primary expected application of the results of this study was to improve and evolve the ECNS to better fit the realities of its use by triage nurses and communication agencies. In addition, as little research on secondary nurse triage at the 9-1-1 communication center exists, this study contributes to the ongoing effort towards a systematic, evidence-based body of knowledge about secondary triage. The communication agencies themselves—and other agencies using the system—may also use the results to improve the efficiency of their own resource allocations.

We hypothesize that the low acuity call demand exceeds the current capacity of the existing ECNS staffing resources.

The primary objective of this study was to determine the call demand and utilization of the ECNS in triaging low acuity calls transferred from the MPDS 9-1-1 emergency dispatch system.

This was a descriptive, retrospective study involving two 9-1-1 communication centers in the United States of America: Louisville Metro EMS (LMEMS), Louisville, Kentucky (KY), and MedStar, Fort Worth, Texas (TX). The two agencies were accredited by the IAED as Accredited Centers of Excellence (ACE). It is important to note that the agencies hours of operation during the study period differed. MedStar operated from Monday to Friday, 9am–5pm. Louisville operated from 8am to 8pm Mondays to Friday and 8am to 4pm on Saturdays.

The study population included a convenience sample (all data that was available during the study period) collected from the inception of the ECNS program in each center until the start of the study. Only data collected between June 1, 2012 and May 31, 2013 at both LMEMS and MedStar were analyzed in the study.

The primary endpoints in this study were the frequency of cases triaged using the ECNS and the frequency of cases that potentially would have been triaged in ECNS based on the Medical Director-approved MPDS determinant codes (referred to as "ECNS-eligible" codes) if the resources had been available to accept those calls. All the frequency distributions were characterized by hour of day, day of the week, and month of the year.

STATA for Windows® software (STATA Statistical Software: Release 13.0 ©2013, StataCorp, College Station, TX, USA) was used for data analysis. Descriptive statistics such as frequencies and percentages were used to profile the distributions of the ECNS-eligible and ECNStriaged calls. For comparison purposes, the call volume of ECNS-eligible cases was plotted against the call volumes of calls which were triaged using the ECNS. These graphs were plotted by hour of day, day of week, and month of year.

Figure 1a shows that by hour of day, the volume of the ECNS-eligible cases was lower between midnight and 7am. However, the volumes increased from around 8am and stayed steady until around 11pm (2300 hours). Nevertheless, the distribution of ECNSeligible cases was generally similar for each day of the week (Fig. 1b). A similar pattern was observed in the distribution by month of the year, except for the peaks during January for both agencies, and February for LMEMS (Fig. 1c). Call volume distribution patterns were very similar for both agencies.

Calls transferred to or triaged using the ECNS

Figure 1a shows that the majority of the 2,728 calls (83%) were transferred to the ECNS between 8am and 4pm (1600 hours). The call volume increased from 8am until about 4pm when it substantially started to decrease. The call volume transferred to the ECNS by day of the week was lower during the weekend as compared to the call volume during weekdays (Fig. 1b) which was a reflection on the staffing pattern. There was a decrease of ECNS-triaged cases during the summer months of June through September (Fig. 1c). On average, LMEMS triaged approximately 190 cases per month and MedStar triaged about 30 cases monthly. 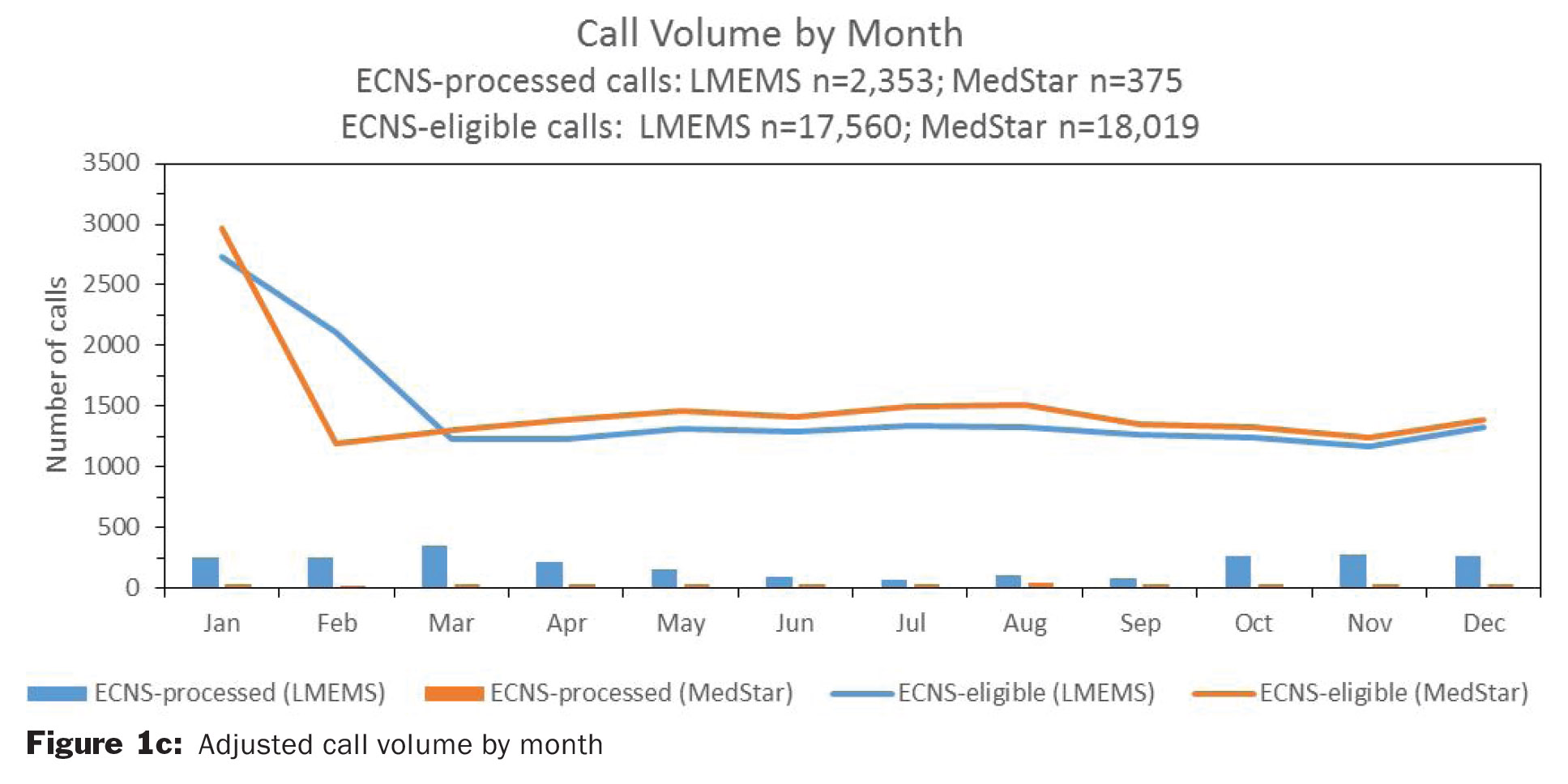 The study findings show that a high percentage and number of ECNS-eligible MPDS codes did not get sent for nurse triage, in part due to understaffing of the ECN position during operating hours and days of heavy to medium call load. There may be limits to how many cases can be transferred to the ECN due to other factors not explored in this study, including policies that would exclude eligible codes from transfer due to various difficult circumstances, such as: the patient calling from a public place where it is more difficult to take the additional time and provide the necessary information an ECN triage requires; patients excluded by the EMD for non-clinical reasons such as exposure to a harsh environmental (e.g., cold, heat, outdoors etc.); excluding patients from a certain extreme age group because of the risk of under-triage (e.g., those younger than 1 year or older than 85 years); or patients who simply refuse the option of being further triaged by the nurse, and insist on an immediate ambulance response.

From the perspective of potential case load, it would appear to be beneficial for these two agencies to extend the hours of ECNS staffing well into the late evening and nighttime hours since the volume of ECNS-eligible calls remained high until about 11pm, including weekend days. A limiting factor could be the availability of alternative resources other than the ED, or alternative transport other than ambulances to accommodate the patients after business hours as fewer of these resources are available after-hours or on weekends.

Since ECNS staffing by month, day, and hour was not entirely consistent in either center, schedules changed from time-to-time based on staff availability, attrition, and budget constraints. Additionally, we did not have a daily staffing log for each center, therefore, we were unable to control for these variations. Also, the two centers did not have the same IAED-approved ECNS-eligible (MPDS) code-sets; one center was more conservative in the IAED-approved ECNS-eligible MPDS codes available for transfer to the ECN. Finally, although call demand volumes already account for system-specific predetermined low-acuity code exclusions, there are other nonclinical barriers to transferring patients for a secondary nurse triage that we did not account for here, such as: environment, extreme age, patient's refusal to cooperate, and any existing local policies.

The data clearly demonstrated that, for both agencies, there is a significant volume of low acuity MPDS calls that are eligible for nurse triage which are not being triaged using the ECNS. Each agency should explore the costs and benefits of staffing their (ECNS) secondary triage desks for longer hours, particularly between 6pm and 11pm (or midnight) to maximize the opportunity to triage low-acuity patients to more appropriate healthcare resources. Further research should consider factors such as local policies, operating hours, and availability of alternative resources other than the ED, to accommodate these lower acuity patients after business hours and weekends.

The investigators would like to thank the agencies that provided MPDS and ECNS data for this study: LMEMS and MedStar Mobile Health, Ft. Worth, Texas.