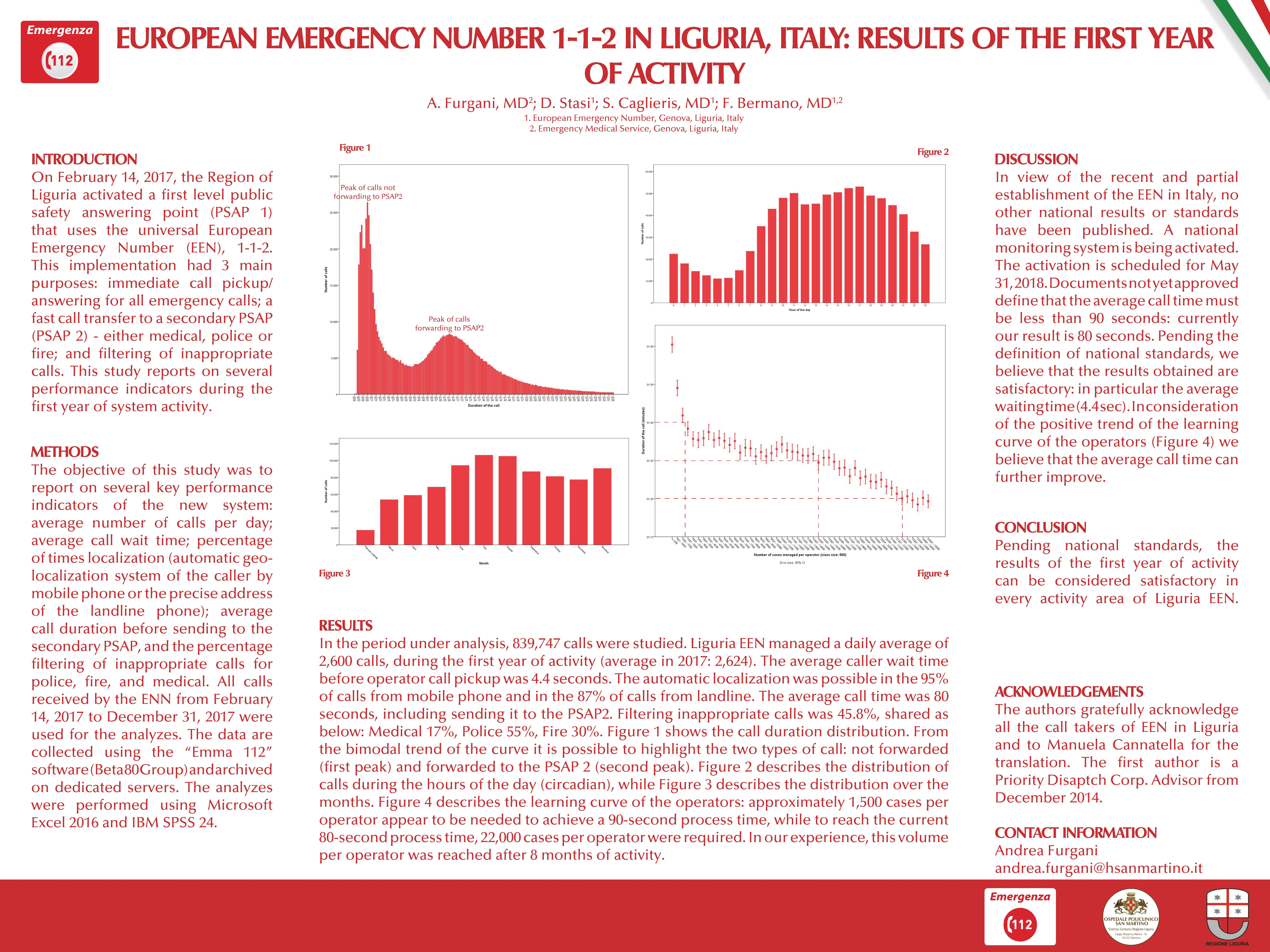 Introduction: On February 14, 2017, the Region of Liguria (one of the 20 regions of Italy) activated a first level public safety answering point that uses the universal European Emergency Number (EEN), 1-1-2. This implementation had 3 primary purposes: immediate call pickup/answering for all emergency calls; a fast call transfer to a secondary PSAP - either medical, police or fire; and filtering of inappropriate calls. This study reports on several performance indicators for the first year of system use.

OBJECTIVE: The objective of this study was to report on several key performance indicators of the new system: average number of calls per day; average call wait time; percentage of times (automatic geolocation system of the caller's cell phone for mobile or the precise address of the landline phone) was possible for mobile phone and landline calls; average call duration before sending to the secondary PSAP, and the percentage filtering of inappropriate calls for police, fire, and medical.

METHODS: All calls received by the ENN from February 14, 2017 to February 13, 2018 were used for the analyzes. The data are collected using the "Emma 112" (Beta 80 Group) software and archived on dedicated servers. The analyzes were performed using Microsoft Excel 2016 and IBM SPSS 24.

RESULTS: Liguria EEN managed a daily average of 2,600 calls, during the first year of activity. The average caller wait time before operator call pickup was 4.4 seconds. The automatic localization was possible in the 95% of calls from mobile phone and in the 87% of calls from landline. The average call time was 80 seconds, before sending it to the PSAP2. Filtering inappropriate calls was 45.8%, shared as below: Medical 17%, Police 55%, Fire 30%.

CONCLUSIONS: In view of the recent and partial establishment of the EEN in Italy, no other national results or standards have been published. A national monitoring system is being activated. The activation is scheduled for May 31, 2018. Documents not yet approved define that the average call time must be less than 90 seconds: currently our result is 80 seconds. Pending the definition of national standards, we believe that the results obtained are satisfactory: in particular the average waiting time (4.4 sec).