Introduction: The evaluation of emergency calls received by Emergency Medical Communication Centers (EMCCs) is the first and basic step for activating the chain of survival. It also represents an essential prerequisite for optimal response to and management of critical patients.

Objective: The objective of this study was to evaluate whether the introduction of a single, structured, and standardized emergency medical dispatch system provided a more uniform evaluation of all emergency calls among five EMCCs in Liguria, Italy.

Methods: The study retrospectively examined the assigned priority dispatch codes in 2,480,267 emergency calls triaged by the five EMCCs in Liguria from 2002 to 2014. The study data were classified into two periods of time: WO-MPDS, the period of time when the EMCCs did not use Medical Priority Dispatch System™ (MPDS®), and W-MPDS, when they did. Based on the priority codes, emergency calls were divided into two groups: critical (CR), including red and yellow codes, and non-critical (N-CR), includin green and white codes.

Conclusion: The use of MPDS significantly improved the uniformity of evaluation in emergency calls among EMCCs in Liguria.

The "chain of survival" is a metaphor that describes the sequence of events in emergency cardiac care. Recognition of early warning signs and activation of the emergency medical system are the first two important steps of this chain.1 In this setting, Emergency Medical Communication Centers (EMCCs) play a key role since they provide medically-approved remote triage and instructions via phone until arrival of the ambulance services.2, 3, 4, 5 Precise, and consistent triage of emergency calls leads to a more accurate allocation of the limited prehospital resources, with important implications on patient care and outcomes.6, 7, 8, 9, 10 The role of emergency medical dispatching as the gatekeeper function for prehospital emergency care has been emphasized in the new guidelines for resuscitation,11 underlying the significance of organizational planning of the emergency medical services (EMS) including ambulance services and EMCCs. Despite these evidences, data on emergency medical dispatching is very sparsely reported, and modifiable factors that could potentially influence emergency patients' trajectory have rarely been explored.12

An adequate emergency call evaluation represents an important prerequisite in order to guarantee a uniform and adequate medical treatment to critical patients, thus strengthening the chain of survival. Improving professional, individual calltakers' skills and standardizing emergency call evaluation processes among different EMCCs could potentially promote this desirable outcome. A recent analysis conducted at the EMCC of Verona showed that "the most frequent errors occurred in the resource allocation and timing phase (34.2%) and in the dispatch phase (31.0%)" and "most of the errors were due to human factors (77.6%)".13 In order to improve the consistency of telephone triage assessment, the Ministry of Health also recommends the use of standardized tools to reduce the variability of decisions due to subjective interpretations of the patient status.14 Variability can adversely affect the results and lead to substandard care, a situation in which the assistance provided is considered inadequate or below the expected standards, both in terms of effectiveness and efficiency.

On January 1, 2011, the EMCCs of the Liguria Region adopted the Medical Priority Dispatch System™ (MPDS®) (Priority Dispatch Corp.™, MPDS version 12,1, 2012, Salt Lake City, UT, USA) to manage the emergency calls, using the same local response codes (priority codes) in all EMCCs. The impact MPDS implementation has had on caller triaging has not preiously been studied. Therefore, the aim of this study was to assess the significance of the impact of MPDS on standardizing calltaking, mitigating variability in data gathering, and optimizing prioritization of response in dispatch across the EMCCs in Liguria.

The objective of this study was to evaluate whether implementing MPDS led to a decreased variability in the patient assessment process among Ligurian EMCCs.

This study retrospectively examined the priority codes assigned to emergency medical calls processed by five EMCCs in Liguria, Italy, from 2002 to 2014. Data were obtained from a shared regional database. To compare call assessment consistency among the EMCCs, data on priority codes related to 2,480,267 emergency calls, received from 2002 to 2014, were collected. According to the most recent Italian Law,15 calls are coded by the following colors to indicate a priority level: red for very critical, yellow for fairly critical, green for low critical, and white for non-critical situations.

The Liguria 118 Emergency Medical Service (EMS) covers a region of 1,583,263 inhabitants (52.4% female)16 and an area of 5,410 square kilometers (289 people/square kilometer). There are 235 municipalities in this region, which receives approximately 4.6 million tourists annually, and 28.2% of the population served is 65 years or older. Emergency medical calls are managed by five EMCCs located in Imperia, Savona, Genoa, Lavagna, and La Spezia. In 2014, Liguria 118 EMS responded to 202,726 emergencies (Imperia: 28,325, Savona: 39,293, Genoa: 88,507; Lavagna: 19,945, and La Spezia: 26,656). At the EMCCs, nurses and specialized technicians, certified as Emergency Medical Dispatchers (EMDs) according to the International Academy of Emergency Dispatch® (IAED™) standards, handle all incoming emergency calls since 2011.

Medical resources available for response include Advanced Emergency Vehicles (AEVs). AEVs consist of a rescuer driver, a nurse, and a medical doctor who can provide an Advanced Life Support (ALS) and Basic Life Support (BLS). BLS vehicles, on the other hand, respond with non-professional (volunteer) rescuers who can provide BLS and Basic Life Support Defibrillation (BLSD). Generally, ALS units are dispatched on red codes, while BLS units are sent on yellow, green and white codes.

The primary outcome measure in this study was the coefficient of variation (CV), also known as relative standard deviation (RSD), obtained from evaluating priority code distribution among all five EMCCs. The secondary outcome was the CV obtained from the assessment of priority codes among calltakers in the Genoa EMCC,the only center that had data on individual calltakers for 2005 - 2014.

SPSS® Statistics software (IBM Corp. Released 2013. IBM SPSS Statistics for Windows, Version 22.0. Armonk, NY: IBM Corp.) was used for quantitative data analysis, while SigmaPlot version 12 (Systat Software, San Jose, CA) was used for graphics. The CV was used to evaluate the consistency of emergency calls assessment: CV is a statistical measure of the dispersion of data points in a data series around the mean estimate. It is a ratio of the standard deviation to the mean value expressed as a percentage. The CV represents the ratio of the standard deviation (SD) to the mean and it is a useful statistic for comparing the degree of variation of two groups of data , even if their means are drastically different from each another. Statistical significance was assessed using the Mann-Whitney U test using a 0.05 cut-off level of significance. The 95% confidence interval (CI) was calculated.

Coefficient of Variation Among EMCCs

Coefficient of Variation Among Calltakers 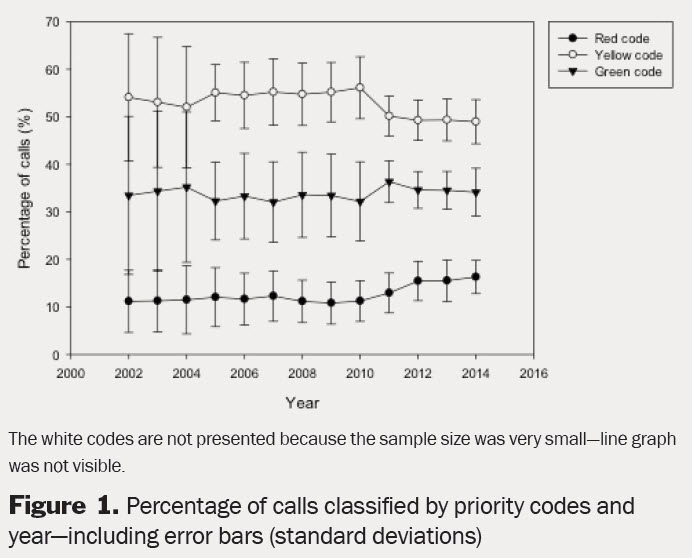 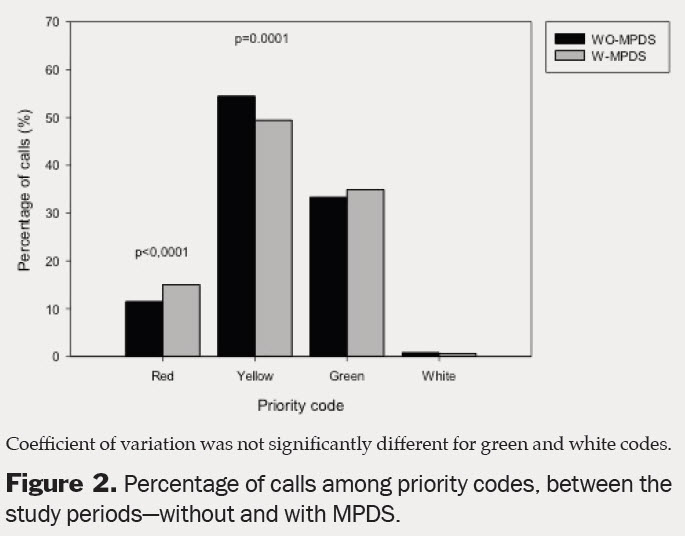 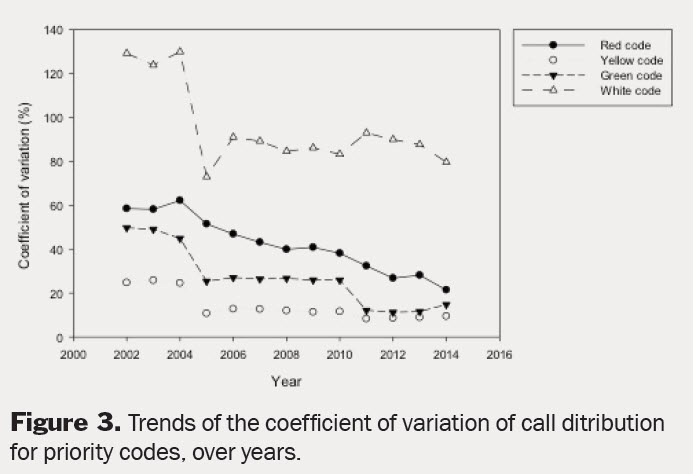 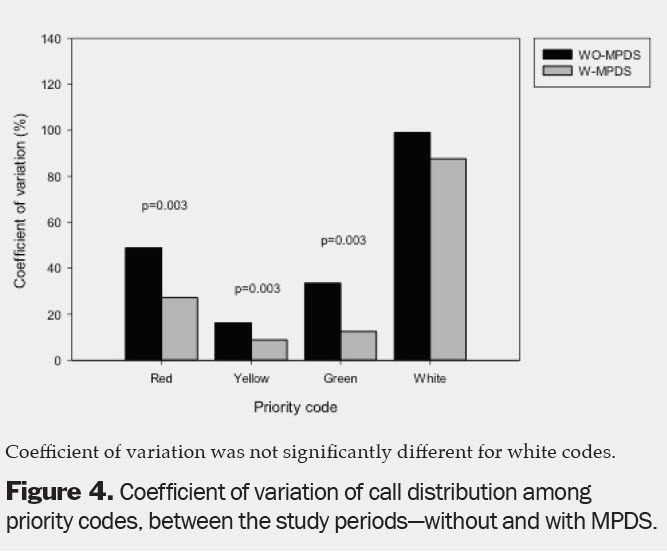 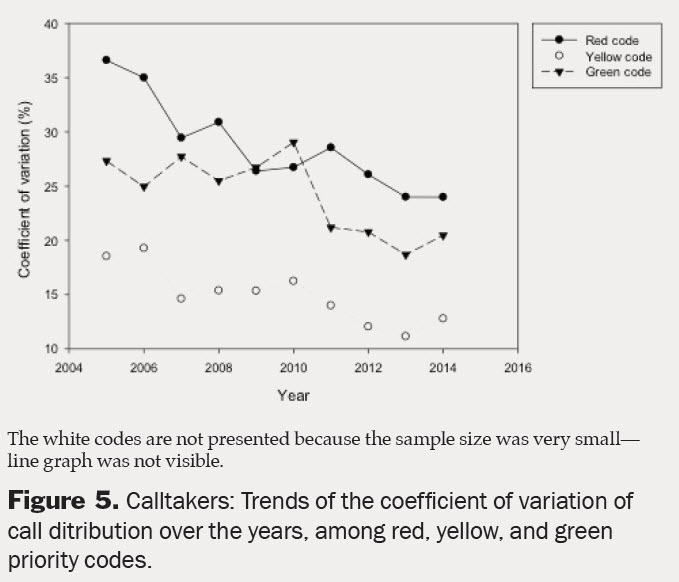 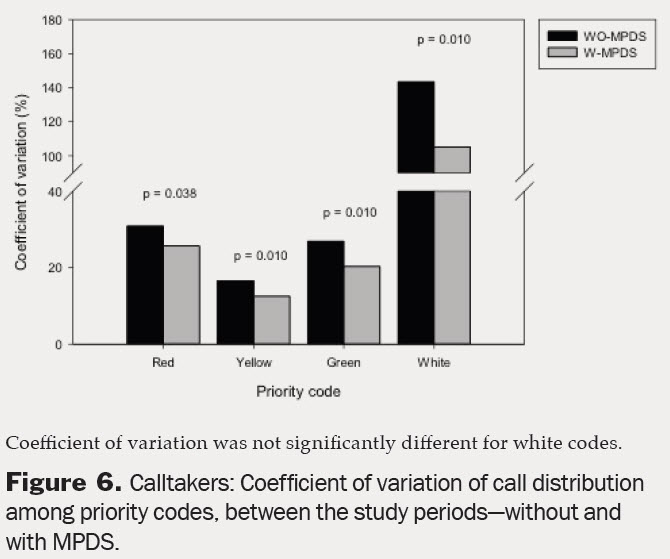 The introduction of MPDS did not significantly change the identification of critical patients (CR), which demonstrates the EMCCs' ability to identify patients fitting this broader definition of a potentially life-threatening condition, even without using MPDS. However in the CR group, during the W-MPDS period, there was a statistically significant redistribution between red and yellow codes, in favor of the former. This increase in red codes distribution could be attributable to the local policies that inform the setting of local responses defined by the Department of Service.

The significant CV improvement among the five EMCCs demonstrates the impact of MPDS on the uniformity of evaluation in assigning priority codes. This result is further confirmed by a sharp CV decrease among the individual calltakers in the Genoa EMCC.

The study findings should be applied with caution. One significant limitation of these findings is that the data were obtained from a few EMCCs, which may not wholly be a true representation of the actual situation in Italy. This also limits the ability to generalize these findings to other settings across the globe. Another important limitation in the study is the absence in the analyzed period of information on the quality of the case review; none of the Ligurian EMCCs was Accredited Center of Excellence (ACE). It is the intention of the authors to confirm the results obtained with subsequent surveys that take into account levels of compliance with IAED performance standards.

The use of MPDS has significantly improved the uniformity in triaging emergency calls among EMCCs in Liguria and among Genoa EMCC calltakers. Future research should aim at correlating the red codes increase to clinical conditions observed by the on-scene emergency responders.

The authors would like to thank Giuditta Easthope, Italian Translator, Priority Dispatch Corp.™, Salt Lake City, Utah, USA, for her immense work in translating the Italian version of the manauscript to English. Thanks to all the EMCCs staff for their support in providing the relevant data that have been studied.