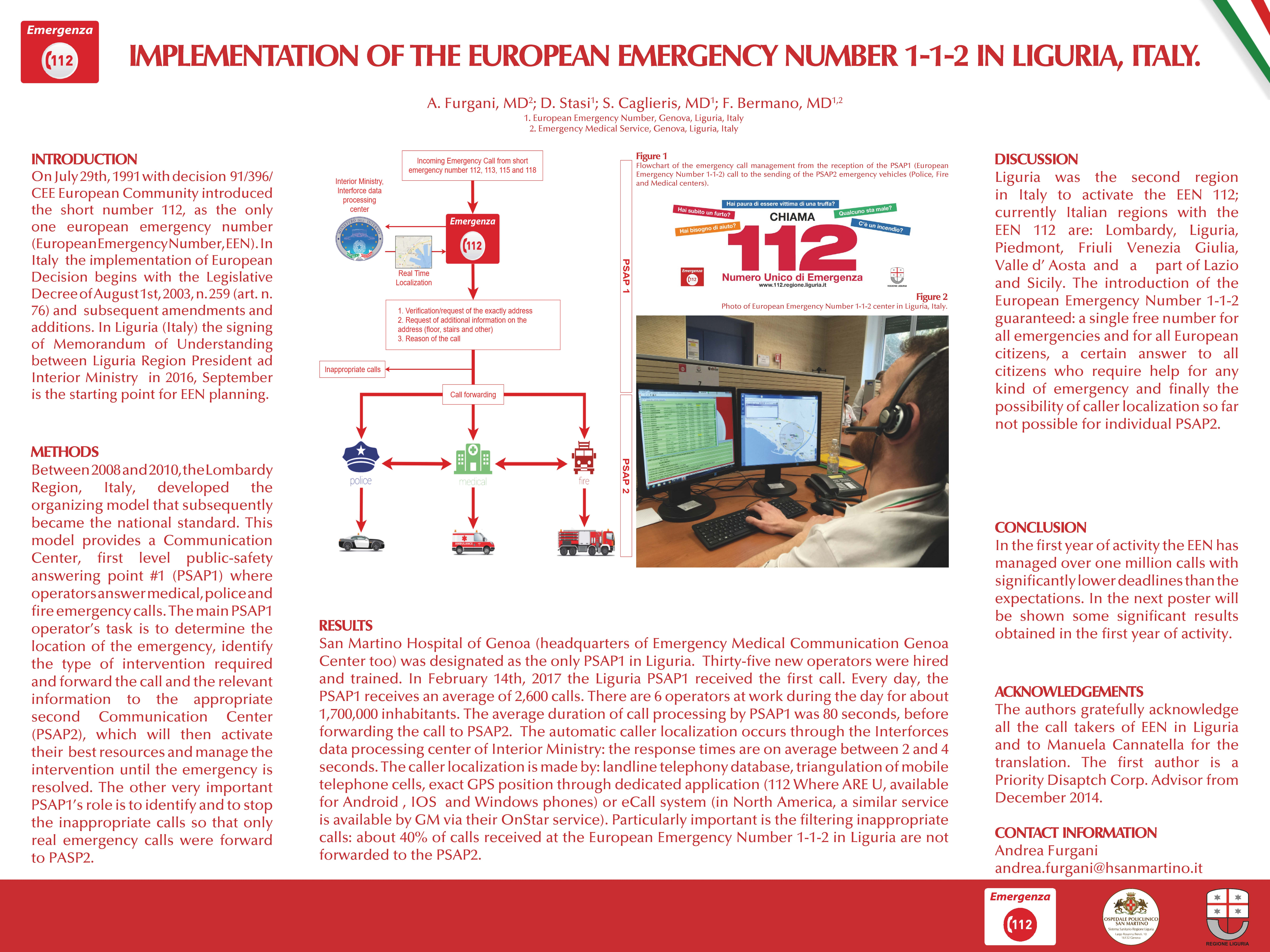 Introduction: On July 29, 1991 the 91/396/CEE European Community introduced the short number 1-1-2, as the only one European emergency number (EEN). In Italy, the implementation of European Decision began with the legislative decree of August 1st, 2003, and subsequent amendments and additions. In Liguria, Italy, the signing of Memorandum of Understanding between Liguria Region President and Interior Ministry in September 2016, initiated the EEN planning.

Objectives: Purpose of this work is to explain how EEN has been developed in Liguria, which hosts a population of about 1,600,000 with a significant tourist flow that in the summer months leads population to exceed 3 million.

Methods: Between 2008 and 2010, the , Italy, developed the organizing model that subsequently became the national standard. This model provides a Communication Center, first level public-safety answering point #1 (PSAP1) where operators answer medical, police and fire emergency calls. The main PSAP1 operator's task is to determine the location of the emergency, identify the type of intervention required and forward the call and the relevant information to the relevant second Communication Center (PSAP2), which will then activate the appropriate resources and manage the intervention until the emergency is resolved. The other very important PSAP1's role is to identify and to stop the inappropriate calls so that only real emergency calls were forward to PASP2.

Results: San Martino Hospital of Genoa (headquarters of Emergency Medical Communication Genoa Center too) was designated as the only PSAP1 in Liguria. Thirty-five new operators were hired and trained. In February 14th, 2017 the Liguria PSAP1 received the first call. Every day, the PSAP1 receives an average of 2,600 calls. There are 6 operators at work during the day. The average duration of call processing by PSAP1 was 80 seconds, before forwarding the call to PSAP2.

Conclusions: Liguria became the second region in Italy to activate the EEN 1-1-2; currently Italian regions with the EEN 112 are: Lombardy, Liguria, Piedmont, Friuli Venezia Giulia, Valle d' Aosta and a part of Lazio and Sicily. In the first year of activity, the EEN has managed over one million calls with significantly lower deadlines than the national standards.