Introduction: 911 centers receive a wide variety of calls for police-related incidents. Using the Police Priority Dispatch System (PPDS®), a 911 Emergency Police Dispatcher (EPD) categorizes each incident with a specific Chief Complaint (CC) and prioritizes the case using a systematic alpha-numeric coding matrix. The wide variation in CC types and specific codes assigned can profoundly affect staffing and resource deployment decisions made by law enforcement agencies. However, the frequency of specific call types and priority levels in the PPDS has not been studied formally to date.

Objective: The objective of this study was to quantify and describe the distribution of PPDS CCs, priority levels, and specific incident codes using dispatch data from two 911 centers in North America. Also, we aimed to identify the five most frequently used CCs.

Methods: This was a retrospective and non-controlled descriptive study involving two emergency communication centers in North America. Descriptive statistics such as frequencies and percentages were used in the tabulation of incidents of calls by Chief Complaint and Determinant Code, by agency, and overall.

One of the primary roles of government is to ensure freedom from fear, crime, and disorder—and police are essential to meeting that obligation.2 In the U.S., calling 911 is widely accepted as the method of choice in summoning the police for almost any type of law enforcement need. Thus, 911 calltakers can expect to receive a wide variety of calls for police-related incidents on any given day. These incidents can include anything from minor disturbances, alarm notifications, and traffic problems to violent crimes in progress such as armed robberies, assaults, shootings, and stabbings.1 Using the Police Priority Dispatch System (PPDS®), certified 911 Emergency Police Dispatchers (EPDs) are able to gather incident information in an organized, standardized method, categorize each incident with a specific Chief Complaint (CC), and prioritize the case using a systematic alpha-numeric coding matrix. The coding matrix contains six basic priority levels (OMEGA [lowest priority], ALPHA, BRAVO, and "Past" events are defined by each agency to take into account response time needs, call load, and local geography. In general, a "Past" police event is an event in which an agencydefined period of time has elapsed from the conclusion of the incident. By definition, if an event does not meet the locally defined time frame for a "Past" police event, the event is considered to either be "In Progress" or to have "Just Occurred" and thus warrants a higher priority response.

The PPDS focuses on several major objectives: response needed (if any), officer and caller safety, apprehension of suspects, telephone pre-arrival instructions to aid callers, and collection of additional incident information for investigation and administrative purposes. The mix of various CC types and codes profoundly affects staffing and resource deployment decisions made by police agencies in pursuit of these objectives. However, the frequency of specific call types (Determinant Descriptors) and priority levels in the PPDS has not been formally studied to date.

The objective of this study was to quantify and describe the distribution of the CCs, priority levels, and specific PPDS incident codes using dispatch data from two 911 centers in the United States.

This was a retrospective and non-controlled descriptive study involving two emergency communication centers: the City of Hialeah Police Department, Florida, USA; and Prince George's County Public Safety Communications, Maryland, USA. These agencies are accredited as Police Centers of Excellence by the International Academies of Emergency Dispatch (IAED).3 IAED accreditation indicates that the center has both a very high level of compliance to the PPDS protocol system and a robust quality assurance and quality improvement program in place to achieve and maintain it. A convenience sample of police dispatch data was collected between 2010 and 2011 at Hialeah, and between 2011 and 2012 at Prince George's County. The study sample comprised all the data that was available at these agencies during the study period.

The primary endpoint was to determine the percentage of calls categorized under each Chief Complaint, priority level, and determinant code as well as identify the five most frequently used CCs.

STATA for Windows® software (STATA Statistical Software: Release 11.2 ©2009, StataCorp, College Station, TX, USA) was used for data analysis. Descriptive statistics such as frequencies and percentages were used in the tabulation of incidence of calls by Chief Complaint, priority level, and determinant code, by agency, and overall. 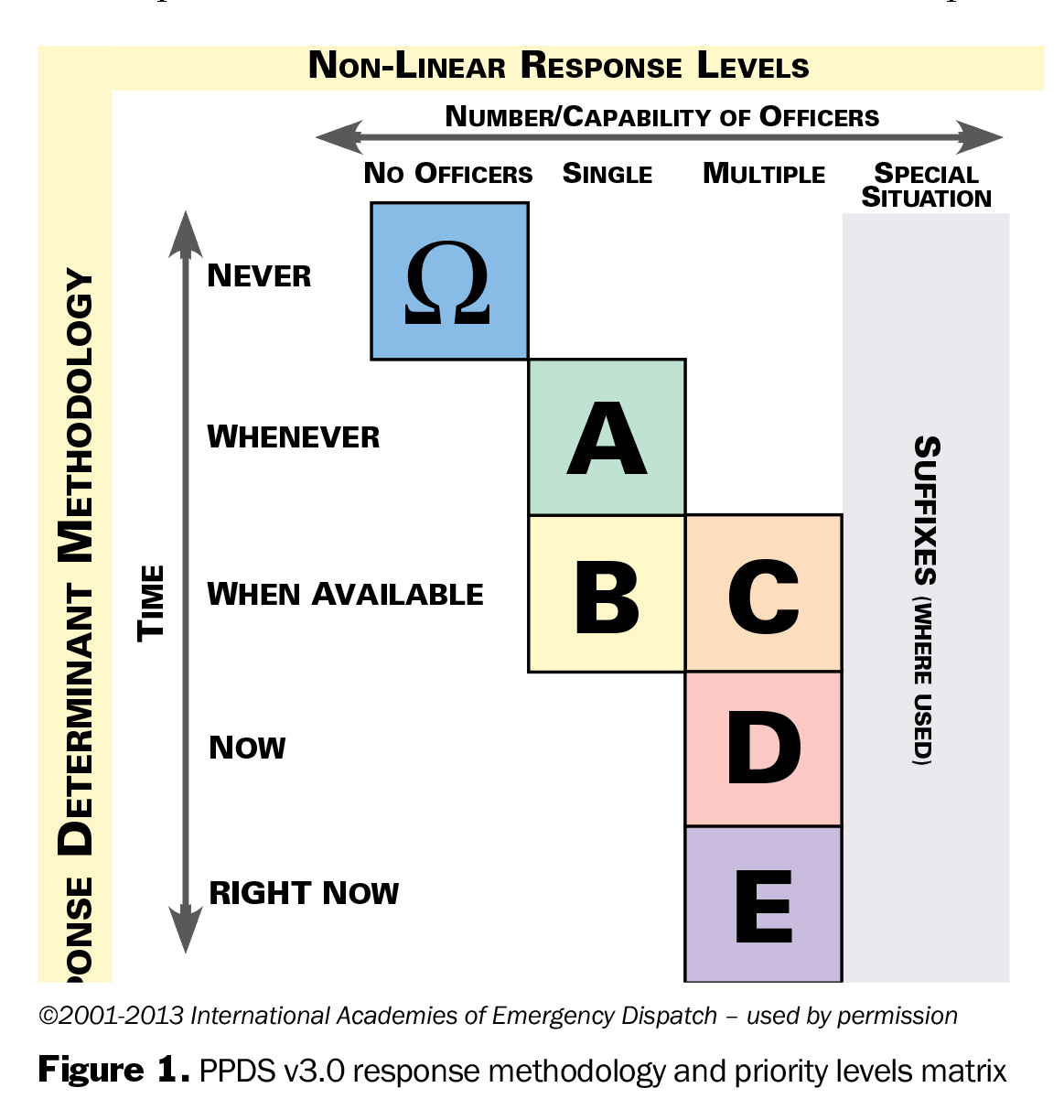 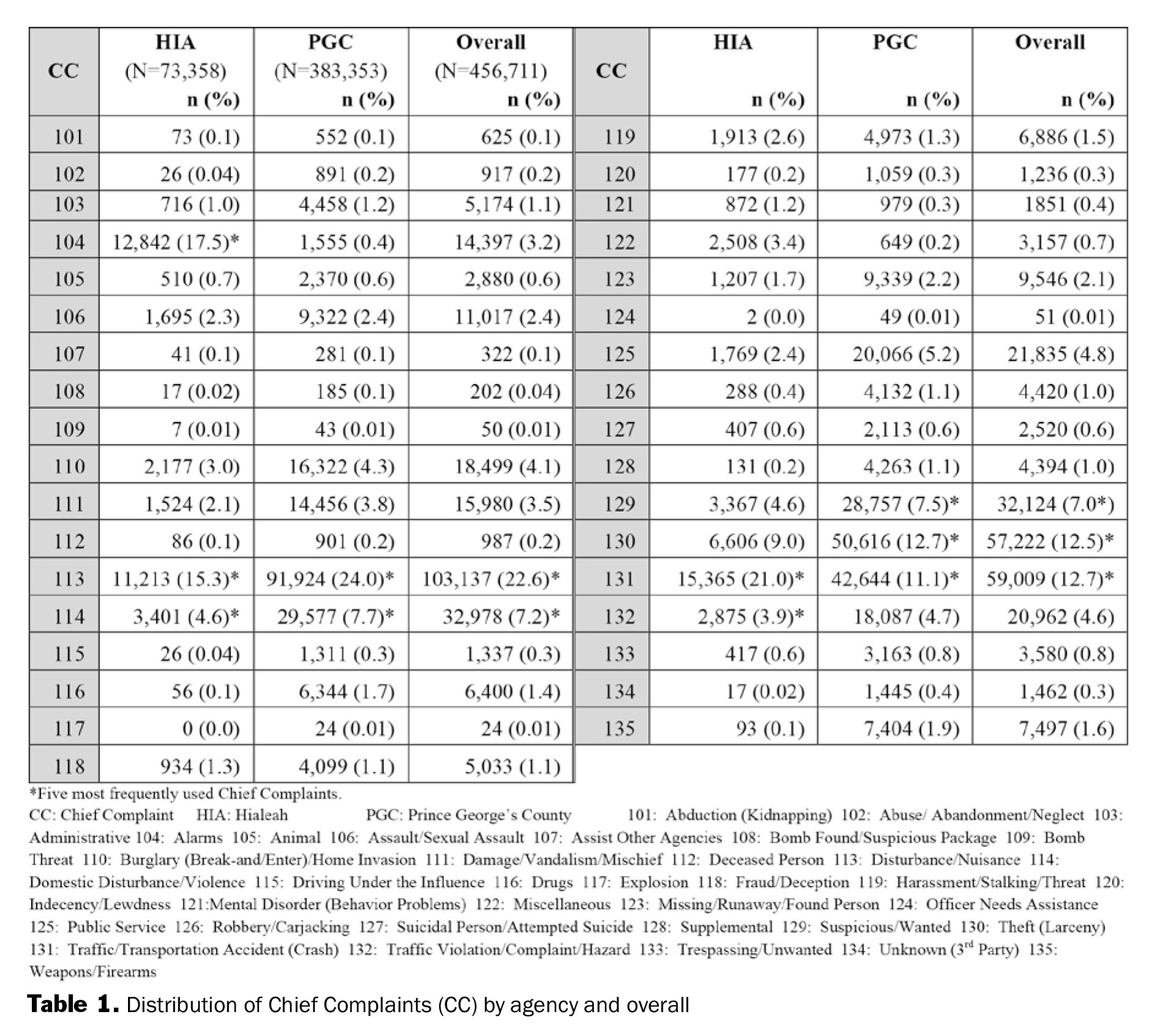 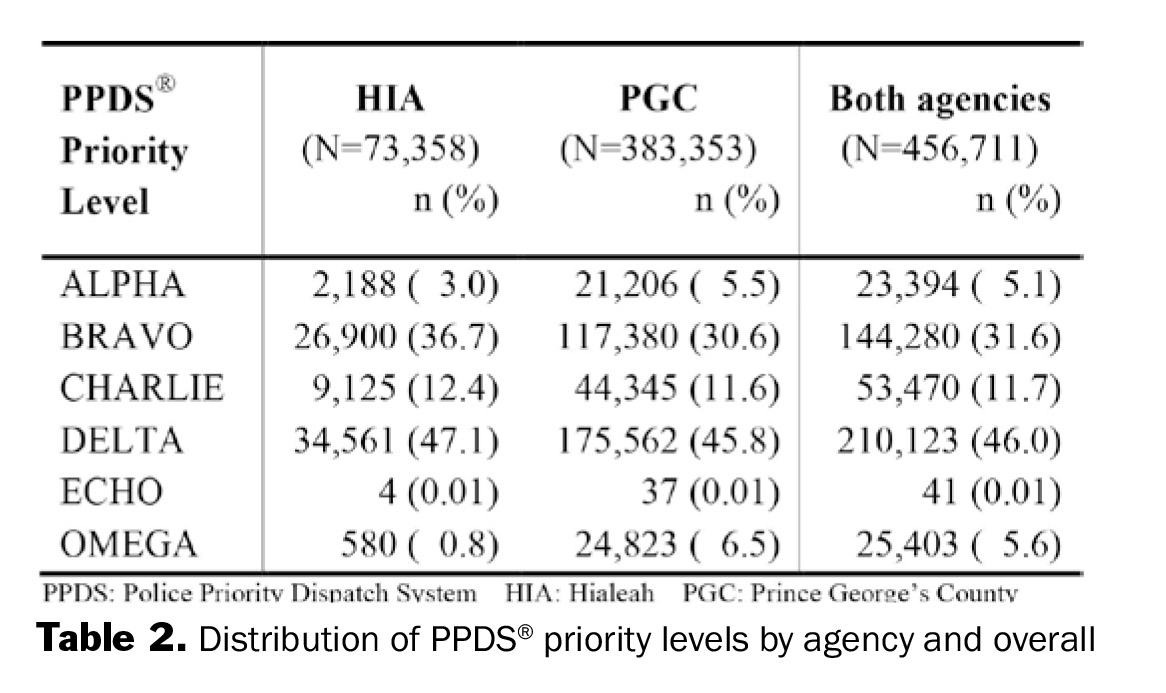 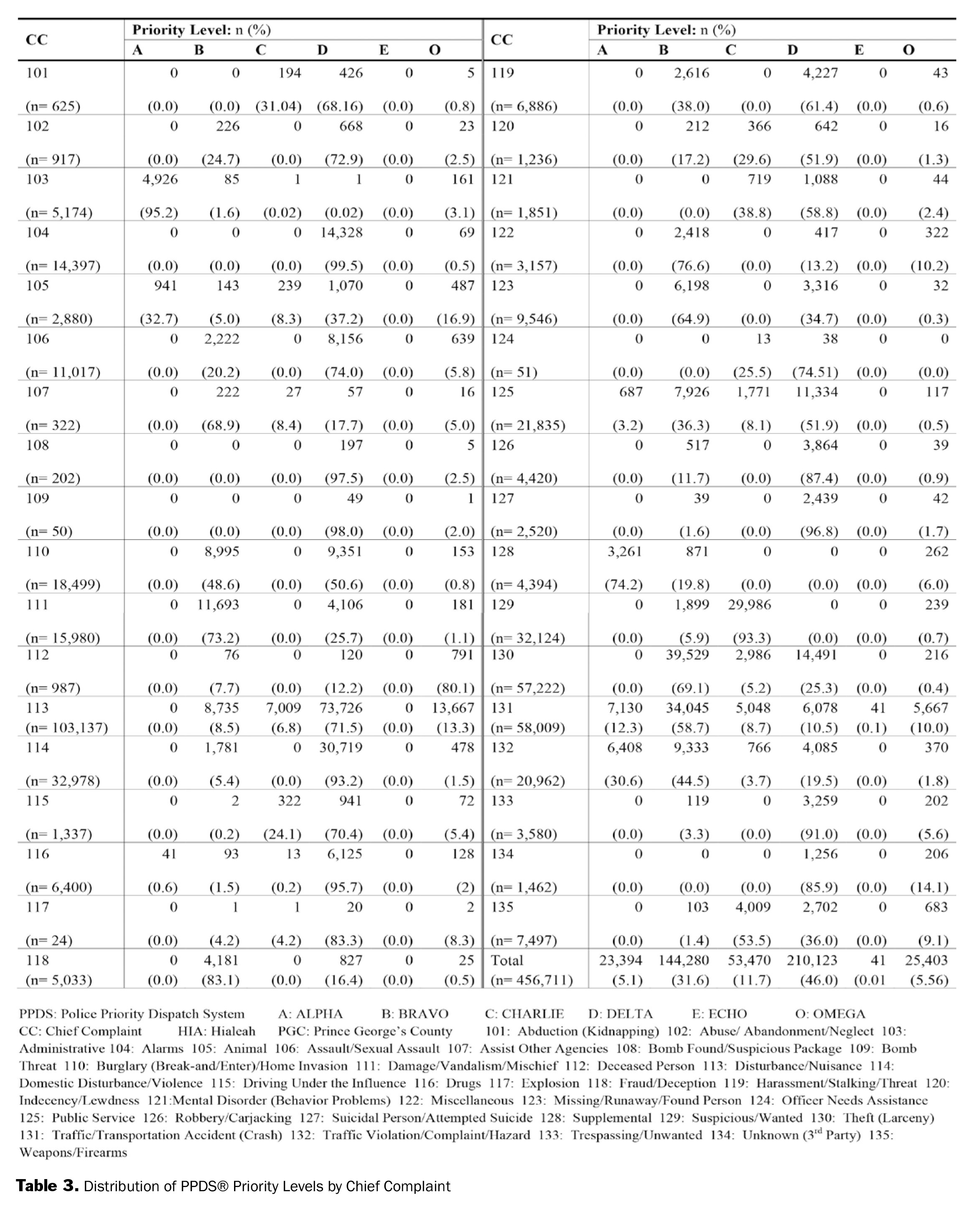 This study has demonstrated that the DELTA level was the most frequently assigned priority level, both overall and in each agency, followed by the BRAVO level. This finding is expected since, on many protocols, these two levels are distinguished only by the difference between "In Progress/Just Occurred" and "Past" event classifications. For example, on Protocol 113 (Disturbance/Nuisance), the DELTA level includes a DELTA-1 determinant descriptor of "Physical (LARGE group)" and a DELTA-2 determinant descriptor of "Physical (Individual or SMALL group)." The Protocol 113 BRAVO level includes a BRAVO-1 Determinant Descriptor of "Past physical." In this way, the BRAVO-level determinant codes are often simply the "Past" version of the DELTAlevel determinants. Similarly-matched DELTA/BRAVO pairs occur throughout the PPDS. This fact, along with the relatively high number of DELTA-level (n=77) and BRAVOlevel (n=67) codes available in the PPDS, suggests that they are likely to be assigned more often than the CHARLIE level, which comprises a total of only 26 specific determinant codes in the entire system. Likewise, in the PPDS Protocol version 3.0 evaluated in this study, only one ECHO-level code was available—131-E-1 (Sinking Vehicle)—and the ECHO level is the least frequently assigned determinant level.

Protocol 113 (Disturbance/Nuisance) was widely used by EPDs for numerous incident types, including civil disputes, verbal fights, threats, municipal by-law incidents, and noise complaints. There are 12 specific determinant codes and four priority levels for this CC alone. The selection frequency of the DELTA level on Protocol 113 was 68.5%, followed by the CHARLIE level, which covers loud parties or other noise complaints, at 10.4%. The high frequency and wide variety of cases for this CC is strong evidence of how disruption to the "peace and quiet" is of a significant concern to the general public—and how quickly such disturbances elicit calls for police intervention.

Chief Complaint Protocol 112 (Deceased Person) yielded the highest percentage of OMEGA-level codes (78.5%). This high percentage of OMEGA-level codes is almost exclusively the result of the fact that Prince George's County assigned 85.2% of its Protocol 112 cases to the OMEGA-level determinant, compared to 26.7% for Hialeah. The reason for this disparity is that in Prince George's County, the OMEGA-level determinant code on Protocol 112 is a commonly used referral code, meaning that no field officers are dispatched. The use of the OMEGA-level referral code is determined by local policy, such that while one agency may send police responders to every Deceased Person case, another may simply refer the case to a separate agency, for example a coroner's office. This may more particularly be the case in large agencies (such Prince George's County) in which large, separate agencies may exist to handle the functions of coroner and death investigator.

The overall small percentage of cases assigned to Protocol 104 (Alarms) is also of interest. As observed in one study site (i.e., Hialeah), the Alarms protocol is used frequently, since most municipalities have numerous businesses monitored by alarm companies, who are the source of many, if not most, alarm calls. While Protocol 104 was not one of the top five most frequently used protocols determined by this study, it would have been if the percentage of Alarm calls in Prince George's County had not been unusually low. Alarms made up a very small percentage of the calls in Prince George's County (0.4%), compared to 17.5 % in Hialeah. Further inquiry with Prince George's County staff revealed that they have special reporting and documentation requirements for the county's false alarm reduction unit. As a result, they process these cases through a special local-agency procedure that does not include the use of Protocol 104.

This study did not look at case outcomes, including apprehensions or other measures that might be considered in determining the accuracy and usefulness of the codes assigned by the PPDS. We also did not look at the geographical distribution of call types within each agency's service area, which would be very useful in identifying differences among communities, neighborhoods, and areas of service. In addition, our study was limited to two sites, and this sample size limitation was compounded by the fact that one of our study sites employs an unusual response to alarms, not handling them through the PPDS. As a result, that site registered an abnormally low number of calls handled on Protocol 104: Alarms. It is possible that a similar study with a larger sample size—or a sample not including this particular agency—might find a higher overall percentage of calls handled on that protocol. Further research is necessary to verify this.

The study findings demonstrated that certified EPDs using the PPDS for 911 calls assign a wide range of CCs, priority levels, and Determinant Descriptor codes, which taken together constitute the spectrum of alpha-numeric codes used to determine a specific police response or other call handling process. The five most frequently used CCs identified were: Disturbance/Nuisance, Traffic/Transportation Incident (Crash), Theft (Larceny), Domestic Disturbance/Violence and Suspicious/Wanted (Person, Circumstances, Vehicle. Using these codes as historical baseline data will allow police agencies to more accurately predict the mix (types and frequencies) of calls they will receive in the future and to therefore make more informed resource mobilization and deployment decisions. While the call load and demographics for each of the studied agencies varied significantly, the overall distribution of various CCs is substantially similar. However, future studies should examine meaningful case outcome measures by priority level and complete determinant code, for which this study sets a foundation. Specifically, it would be of significant value to know which protocols, determinant priority levels, and determinant codes most accurately predict apprehensions, which predict referrals to social services, and so on—all of which could contribute to more accurate, appropriate, and effective policing and resource allocation. Additionally, future studies should examine the geographical distribution of cases by protocol number, determinant priority level, and specific determinant code to identify areas with high volumes of certain incident types or severities of calls, times of day in which certain areas are most active and for what types of cases, and the optimal allocation and distribution of available resources within an agency's jurisdiction. Finally, further studies should investigate the reasons for some of the differences observed between these and other police agencies.

The authors would like to thank Toni Youngberg and Holly Clark for planning research study meetings, Aaron Hovatter for his expert advice on data exports, and Ken Winward for his exemplary liaison support with the City of Hialeah. The authors are also grateful to the technical support of Kayman Khaloughi in his effort to process large datasets from Prince George's County.

Conflict of Interest: JC is the CEO and Medical Director of the Research and Standards Division of Priority Dispatch Corp. and a member of the Council of Standards, Board of Certification, and Board of Trustees of the International Academies of Emergency Dispatch. He is the inventor of the Police Priority Dispatch Protocol System® studied herein. SM, GS, CK, MR, DW, TB, IG, BP, and CO are employees of IAED. Ethical approval: The study was approved by the IAED's Institutional Review Board. Funding: None.