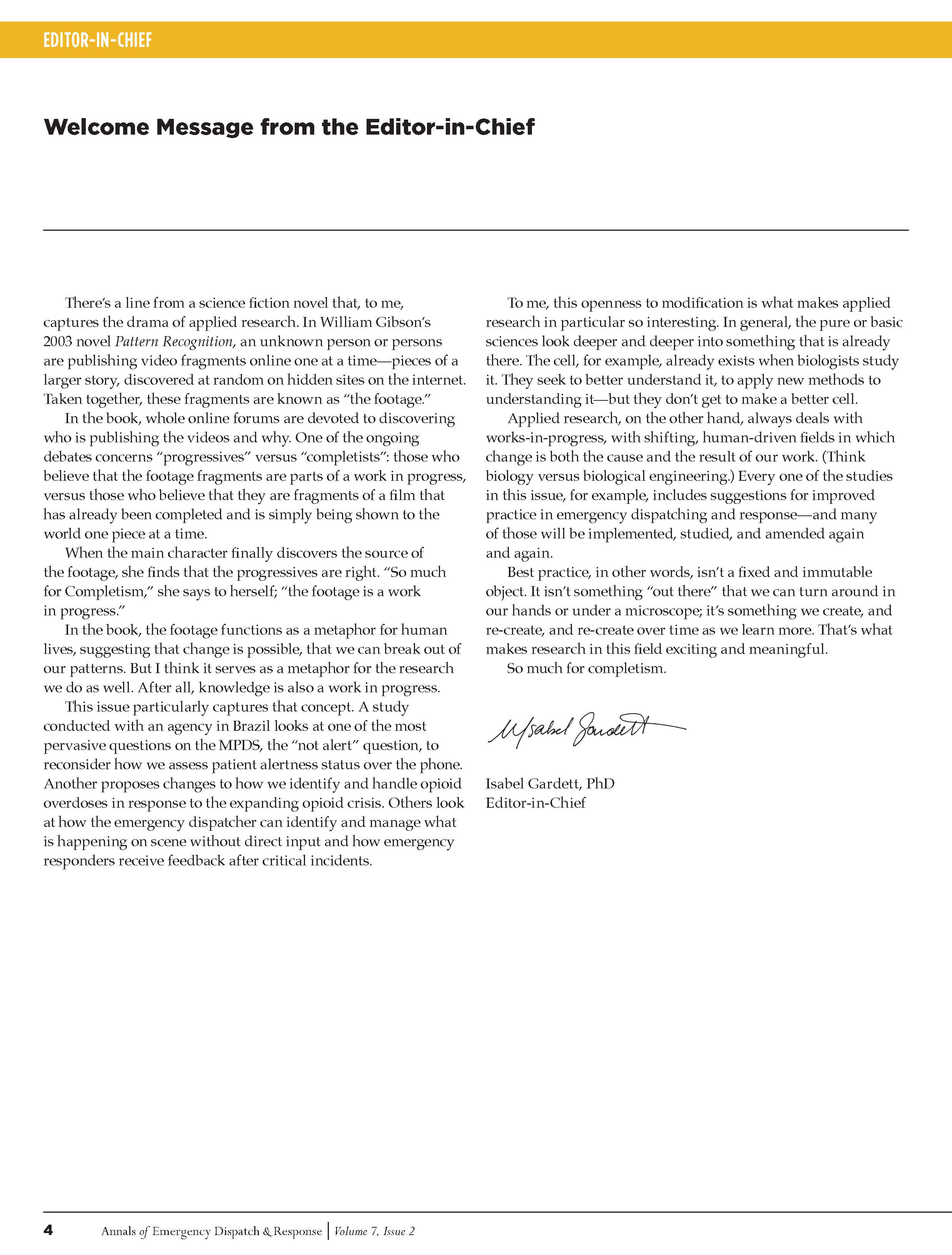 Message from the Editor-In-Chief

There's a line from a science fiction novel that, to me, captures the drama of applied research. In William Gibson's 2003 novel Pattern Recognition, an unknown person or persons are publishing video fragments online one at a time—pieces of a larger story, discovered at random on hidden sites on the internet. Taken together, these fragments are known as "the footage."

In the book, whole online forums are devoted to discovering who is publishing the videos and why. One of the ongoing debates concerns "progressives" versus "completists": those who believe that the footage fragments are parts of a work in progress, versus those who believe that they are fragments of a film that has already been completed and is simply being shown to the world one piece at a time.

When the main character finally discovers the source of the footage, she finds that the progressives are right. "So much for Completism," she says to herself; "the footage is a work in progress."

In the book, the footage functions as a metaphor for human lives, suggesting that change is possible, that we can break out of our patterns. But I think it serves as a metaphor for the research we do as well. After all, knowledge is also a work in progress.

This issue particularly captures that concept. A study conducted with an agency in Brazil looks at one of the most pervasive questions on the MPDS, the "not alert" question, to reconsider how we assess patient alertness status over the phone. Another proposes changes to how we identify and handle opioid overdoses in response to the expanding opioid crisis. Others look at how the emergency dispatcher can identify and manage what is happening on scene without direct input and how emergency responders receive feedback after critical incidents.

To me, this openness to modification is what makes applied research in particular so interesting. In general, the pure or basic sciences look deeper and deeper into something that is already there. The cell, for example, already exists when biologists study it. They seek to better understand it, to apply new methods to understanding it—but they don't get to make a better cell.

Applied research, on the other hand, always deals with works-in-progress, with shifting, human-driven fields in which change is both the cause and the result of our work. (Think biology versus biological engineering.) Every one of the studies in this issue, for example, includes suggestions for improved practice in emergency dispatching and response—and many of those will be implemented, studied, and amended again and again.

Best practice, in other words, isn't a fixed and immutable object. It isn't something "out there" that we can turn around in our hands or under a microscope; it's something we create, and re-create, and re-create over time as we learn more. That's what makes research in this field exciting and meaningful.

So much for completism.