Introduction: This study represents a first attempt to classify a subset of time-to-dispatch in a 911 center – the call prioritization time. This time is defined as the time required to gather critical case information, after the address is obtained, and prior to notifying responder units of the call. This study characterizes call prioritization time in nine different 911 centers, all using the Fire Priority Dispatch System (FPDS). Times were examined by individual agency, overall, Methods: This was a retrospective, non-controlled, descriptive study involving nine 911 and by FPDS Priority Level.

Objectives: The primary objective in this study was to determine call prioritization time by FPDS Priority Level, Chief Complaint type, individual agency, and all agencies overall.

In an emergency situation, particularly in a fire, a lot can happen in just a few minutes. A fire in a non-compartmentalized structure with adequate oxygen supply and plenty of fuel sources to burn can double in size in just sixty short seconds. An average residential home can go from a small unnoticeable fire to fully involved structure fire, destroying everything in its path, in only five to ten minutes. With the potential for so much destruction in such a short amount of time, the response time for any responding fire department needs to be as quick and safe as possible. Such a response does not begin when the engine pulls away from the station but when the emergency dispatcher first takes the call from the concerned caller. Even by then the clock for fire suppression has already been running since the moment of fire ignition.

For fire emergencies, when a caller dials 911, the call is received by, or transferred to an Emergency Fire Dispatcher (EFD), who first verifies the address and phone number, then begins the call prioritization process by accessing the Fire Priority Dispatch System (FPDS™)1, 2, 3 using a logic-based software program, ProQA™. ProQA is an expert system which directs the calltaker in collecting vital information from the caller, including the nature of the incident and critical incident details, by completing several Case Entry Questions and Key Questions4. Once this critical information gathering is complete, ProQA's system logic recommends a dispatch determinant code, which is subsequently assigned to the case by the EFD. The case is then dispatched (i.e., assigned to a response crew or crews), and the EFD continues the call by asking additional Key Questions and then instructing the caller with incident-specific Post-Dispatch and Pre-Arrival Instructions5. The call prioritization time, therefore, is defined as the amount of time it takes for the calltaker to open ProQA, ask critical questions, and to confirm the dispatch (determinant) code for the case. This dispatch (determinant) code is used to assign the correct response units to the case, in the proper response mode – either emergency (with lights–and-siren), or non-emergency (no lights-and-siren use). Call prioritization time in a 911 center continues to be a topic of much discussion in public safety. There is no blanket approach to establishing a universal time standard for dispatch, unless defined at the level of a specific type of event (chief complaint) and a dispatch (determinant) code (situation). Additionally, because a widely accepted public safety standard defines total response time to a 911 event as beginning when the calltaker answers the phone, call prioritization time is viewed as a critical sub-component of total response time to an emergency scene. This places the 911 center in the awkward position of getting constant pressure from response agencies to shorten call prioritization time. However, the efficacy of the 911 calltaking process should first be evaluated.

As described in detail in a previous study6, six priority levels (Figure 2) are used to define the relative urgency of the response, and several hundred determinant codes are used to describe the specific nature of the event providing a spectrum of response possibilities. Each local fire department can use these universal codes to craft its own response plan, including an agency-defined response to each determinant code, based on its individual organizational practices, policies, procedures, and geo-political realities.

The primary objective in this study was to determine call prioritization time by Fire Priority Dispatch System Chief Complaint Protocols, and Priority Levels.

The study sample included data collected between 2011 and 2013, using the FPDS®8 and also Accredited Centers of Excellence with the IAED9. The chief complaint (CC), priority level, determinant descriptors, and call prioritization time anonymous data were extracted from ProQA® (software version of FPDS)10.

STATA software for Windows® (STATA Statistical Software: Release 13.1 ©2013, StataCorp, College Station, TX, USA) was used for data analysis. All calls in which the call prioritization time was less than 5 seconds or greater than 10 minutes were excluded from the analysis, because per the investigators' experiences, these time values were unrealistic in a dispatch environment. Cases with such extended times were likely due to dispatcher error from call duplication, or leaving open a case after it was cancelled and abandoned by the calltaker. The percentage of calls prioritized in 15, 30, 45, 60, 70, 80, 90, 120, and 180 seconds for each CC and priority level (ECHO, DELTA, CHARLIE, BRAVO, ALPHA, and OMEGA) was tabulated. The next analysis looked at the median (minimum-maximum) call prioritization time for each priority level categorizing by agency. Analysis of median (minimum-maximum) call prioritization time for each priority level was also performed categorizing by CC.

Referencing Figure 2, those priority levels requiring urgency in response, ECHO and DELTA both received a call prioritization in 90 seconds or less over 90% of the time.

In a previous study4 the top five call types were listed as Protocol 52 (alarms), Protocol 67 (Outside fires), Protocol 69 (Structure fire), Protocol 53 (citizen assist) and Protocol 55 (electrical hazards). The top 3, Protocol 52, 67, and 69 had all call types prioritized within 60 seconds approximately 65% of the time and 90% in 90 seconds or less. These top three Protocols comprised 70.8% of the total call volume represented in the study. (Table 2)

In the previously referenced study4, it was identified that the MEDIC center covers approximately 500 square miles while Manatee and Union cover between 640 and 900 square miles. The discussion can be made for longer call processing times due to the area (metro versus urban) served by each center. 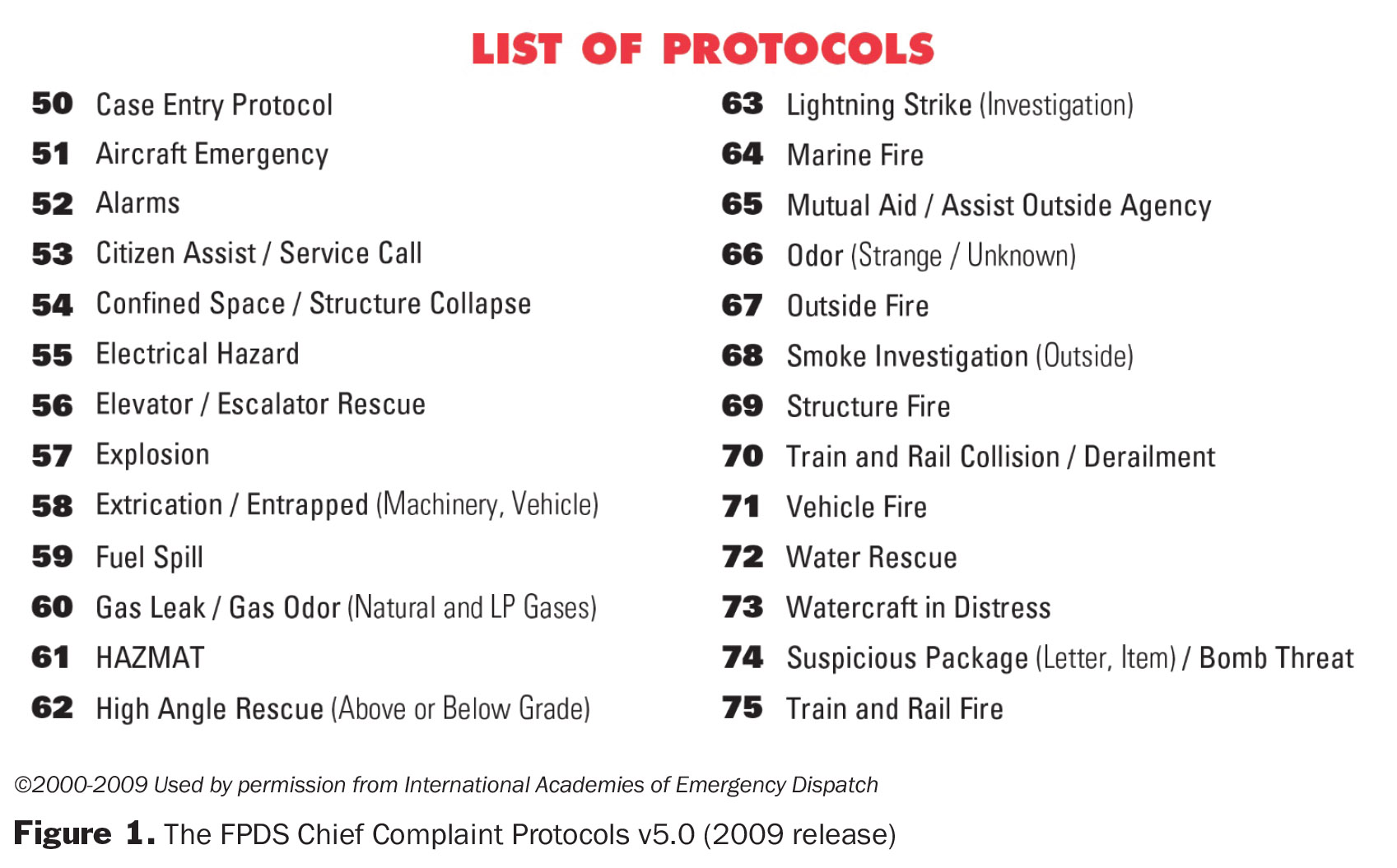 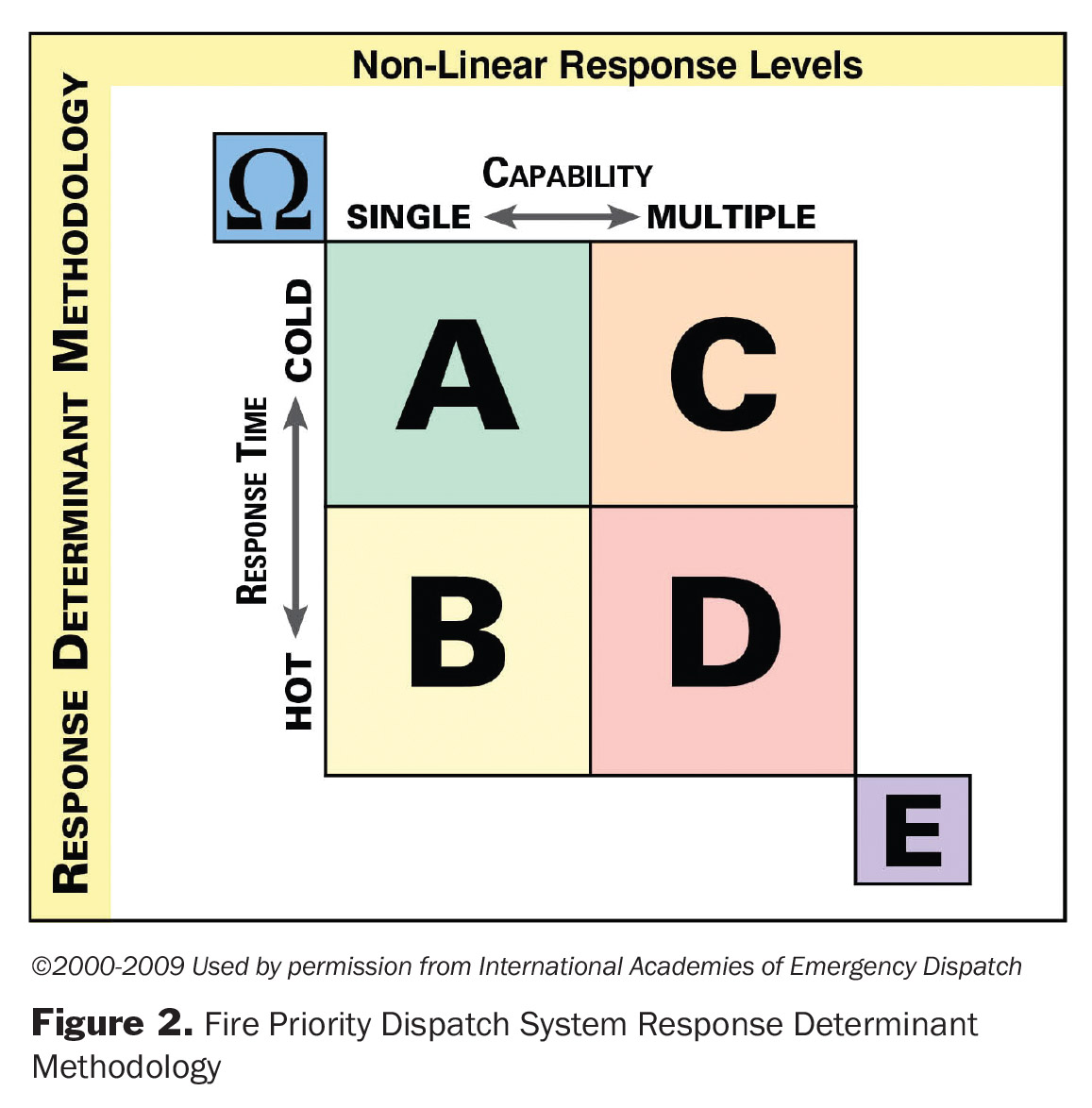 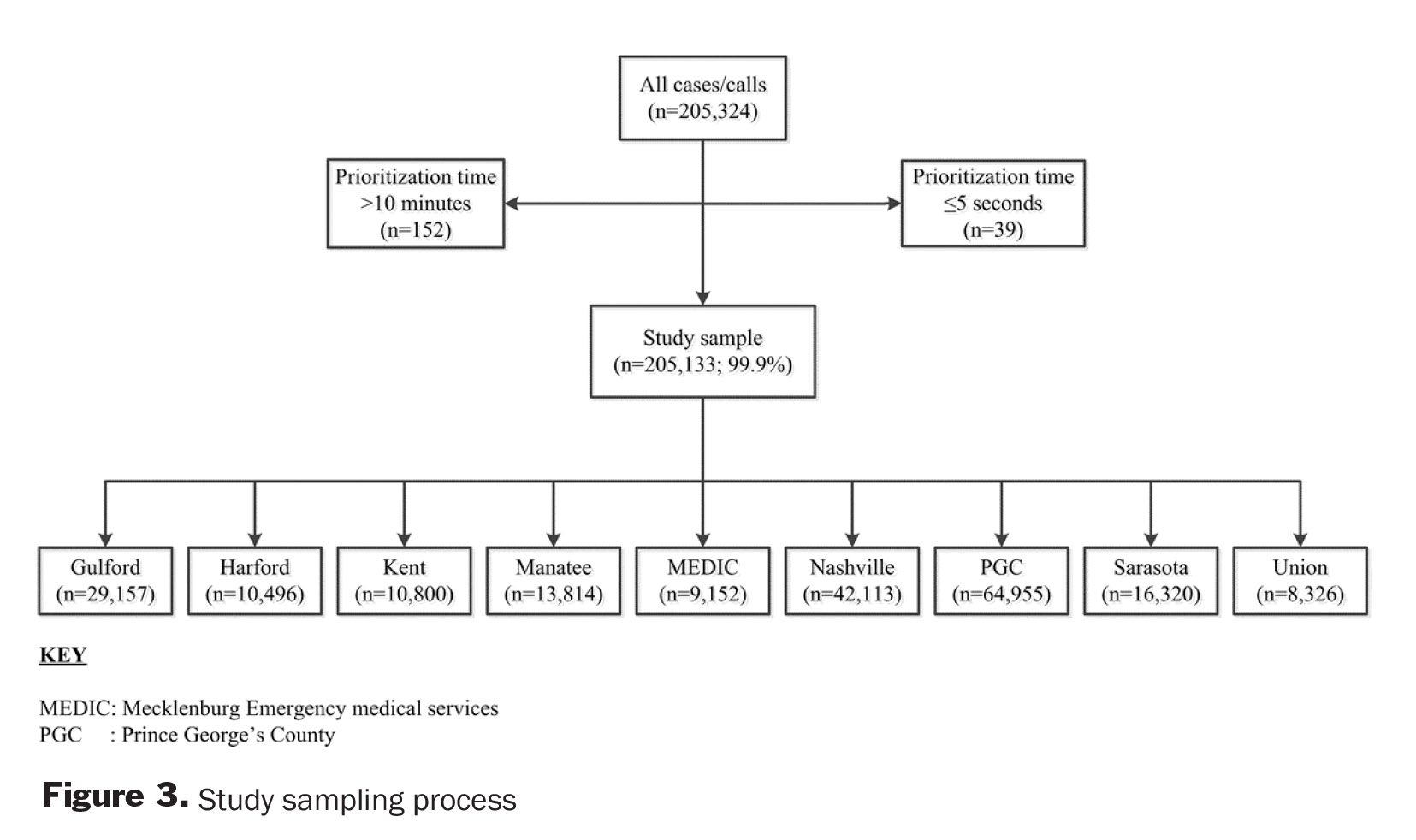 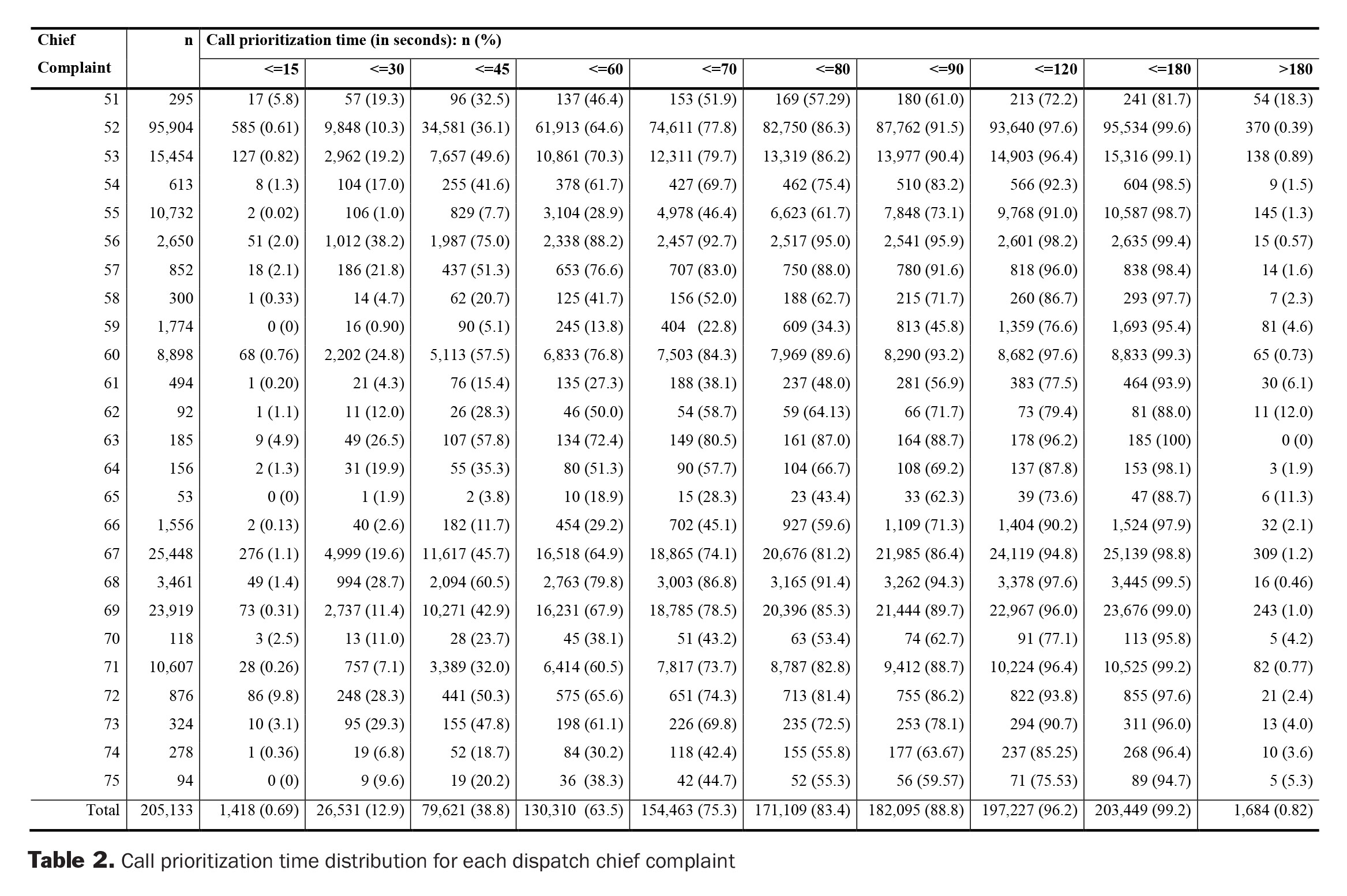 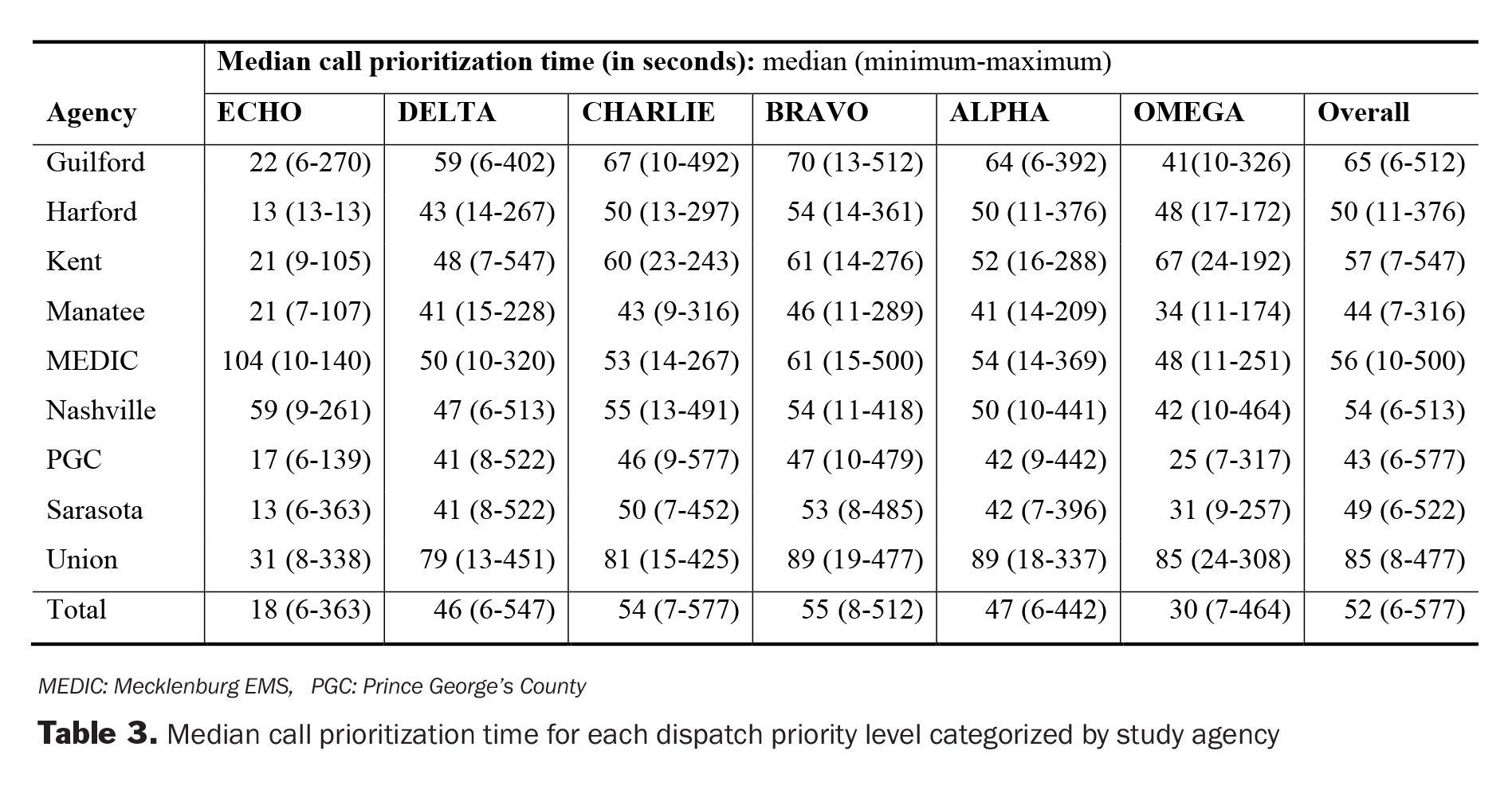 Most fire service and fire dispatching agencies measure their call or dispatch times, as well as their response times, against standards set by national agencies such as the National Fire Protection Agency (NFPA)11 and the Insurance Standards Organization (ISO). These standards tend to apply exclusively—either by rule or in practice—to calls determined to be "emergencies," primarily Structure Fire incidents. Future research will more specifically address the ability of the FPDS to handle the various types of Structure Fire calls in accordance with these time standards. This study sets the baseline for call prioritization times appropriate to each varying type of fire response situation. In the future, time standards should reflect the times needed to do different things safely and correctly–not processes bent to meet one-size-fits-all time standards.

While 911 call centers continue to receive pressure from responding agencies to process calls faster, sooner or later there must be some discussion about how emergency vehicle collisions continue to be the second leading cause of firefighter death in the U.S. Without accurate and complete information obtained from a well-designed call prioritization process, we may continue to arbitrarily send all fire units "hot" to the scene at the "speed of death."

While we had a relatively large sample size, there were several low-frequency chief complaints (e.g. 65, 62, 75, and 70) that did not yield an optimally high number of cases for statistical comparison. This was also true of priority level ECHO, in particular for one agency – MEDIC – where there were only 3 ECHO cases, which may explain the wide difference in median time for this agency's ECHOs. Finally, we were able to examine ProQA data only, not the entire case in the master dispatch computer (generally referred to as CAD). Hence we are not able to capture the entire dispatch time from phone pickup to 1st unit assignment – a time that includes address verification (at the front end of the call, before call prioritization time) and unit notification time (after call prioritization time).