Introduction: The findings of a recent study suggest that a patient's inability to complete all three tasks in a stroke identification tool used by Emergency Medical Dispatchers (EMDs) is a uniquely strong predictor of stroke.

Objectives: To examine the characteristics of the 17 cases in which the patient was unable to complete all three tasks in the Stroke Diagnostic Tool (SDxT).

Methods: The retrospective descriptive study utilized stroke data from three sources in Salt Lake County, Utah, USA—Emergency Medical Dispatch, emergency medical services (EMS), and receiving hospitals—for the period from June 2012 to December 2013. The outcome measures were the percentage of patients who were unable to complete the tasks; characterization of the caller's description of the problem, paramedic findings on scene, and hospital-confirmed ICD-9-CM strokes codes; and the median for the patients' vital sign values.

Results: Of the 215 cases for which the SDxT was successfully completed, 17 (7.9%) patients were unable to respond to any of the three SDxT tasks. A majority (58.8%) of these cases were coded as having a Not Alert medical condition. In 52.9% of the cases, the EMD recorded the caller's description of the patient's problem as the patient having a stroke, and the hospital recorded that over 88.0% of the cases had a primary diagnosis of stroke.

Conclusions: The SDxT could be improved by recategorizing these patients as having clear or strong evidence of stroke.

A recent study that examined the predictive ability of a stroke identification tool used by Emergency Medical Dispatchers (EMDs) within the Medical Priority Dispatch System (MPDS) found it to have high sensitivity in determining hospital-confirmed strokes.1 The Stroke Diagnostic Tool (SDxT) (Fig. 1) used by EMDs in that study is derived from the Cincinnati Stroke Scale developed by Kothari2, 3 and has been adapted to fit the non-visual, remote-assessment needs of the dispatch environment. It contains three tasks for the patient, each designed to assess a specific neurological function. Each task is presented by the EMD as a separate, scripted instruction to the caller, who in turn requests the patient to complete that task. As the caller reports the patient's actions, the EMD records what the patient was able to do, with four possible outcomes: the patient was able to complete the task, unable to complete the task, or partially able to complete the task (with two different levels of partial ability for each task). Each of these answers is assigned a point value, and these are added together to calculate the evidence of stroke when the tool is completed. Inability to complete a task at all is assigned a stand-in value of "4." Once all three task responses are entered by the EMD, the internal SDxT software algorithm uses the point values to compute the level of evidence for a stroke, assigning a designation of clear evidence, strong evidence, partial evidence, No test evidence of stroke, or Unable to complete diagnostic. An inability to complete any of the tasks is recorded as the combination (4,4,4). When determining the final evidence level, the existing SDxT algorithm assigns no predictive value to these "4" results, so the SDxT reports an "Unable to complete diagnostic" response rather than a specific evidence level in these cases.

However, one of the notable findings of the previous study was that in every case where the SDxT was used, and the EMD recorded that the patient was unable to complete all three tasks (n = 17), the patient in fact had a hospital-confirmed stroke. These findings suggest that the patient's inability to complete all three tasks is a uniquely strong predictor of stroke. Our hypothesis, therefore, is that this study finding is significant and should precipitate a change to the SDxT algorithm for determining stroke evidence level, to report the patient as having clear or strong evidence of stroke in these cases.

The study sample included all hospital-confirmed stroke cases for which the EMD, using the Stroke Diagnostic Tool (SDxT) in MPDS Protocol 28 (Stroke [CVA]/Transient Ischemic Attack [TIA]), determined that the patient was unable to complete the smile, raise arm, and speech requests.

The primary outcome measures included the percentage of patients who were unable to complete the tasks of smiling, raising their arms, and repeating a phrase as asked by the EMD; characterization of the caller's description of the problem and paramedic findings on scene; and hospital/ED-confirmed ICD-9-CM stroke codes. The secondary outcome measure was the median for the patients' vital signs values.

The SDxT was successfully completed on 215 cases. Of these, 17 (7.9%) patients were unable to respond to any of the requests to smile, raise both arms above the head, or say, "The early bird catches the worm" as instructed by the EMD (Table 1). Overall, this group of patients was predominantly female (52.9%) and of white race (82.4%), had a median age of 82 years, was most often coded as having a Not Alert medical condition (58.8%), and stayed for about four days in the hospital. The EMD spent an overall 55 seconds median time to complete the SDxT for these cases.

All the patients had either normal (within acceptable range), low, or moderate vital sign values (Table 2).

The caller's description of the patient's problem, as recorded by the dispatcher, was most commonly that the patient was having a stroke (52.9%). The EMD did not record a description of the caller's problem in 6 (35.3%) of the cases. Overall, the most common primary paramedic impression of the 17 patients, as recorded on scene, was Stroke/CVA (5 patients). Altered level of consciousness (ALOC) was also common, recorded specifically as ALOC (4 patients), or indirectly as disorientation (1 patient) or lethargy (1 patient). Facial droop (3 patients) and slurred speech (1 patient) were also recorded. 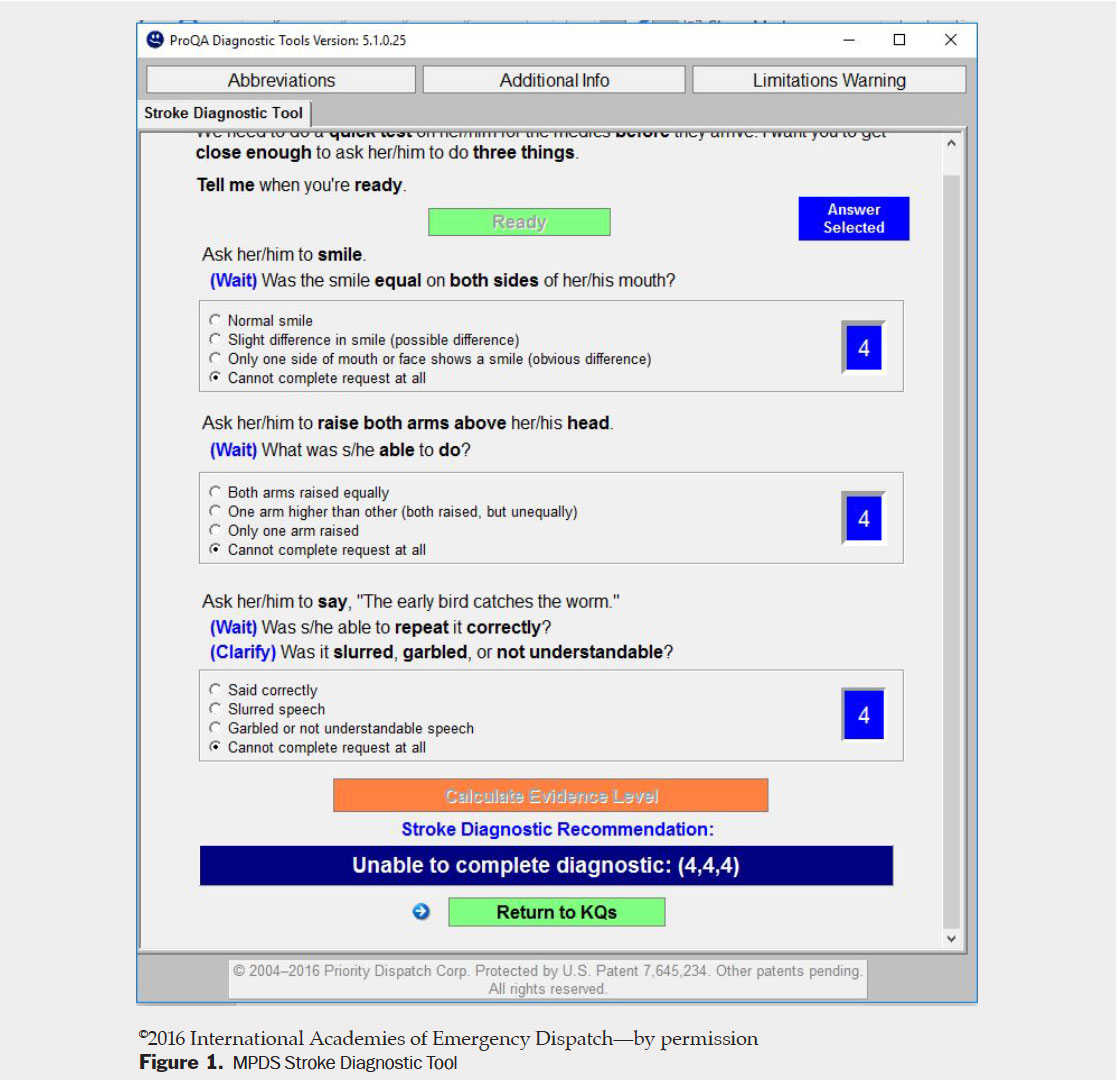 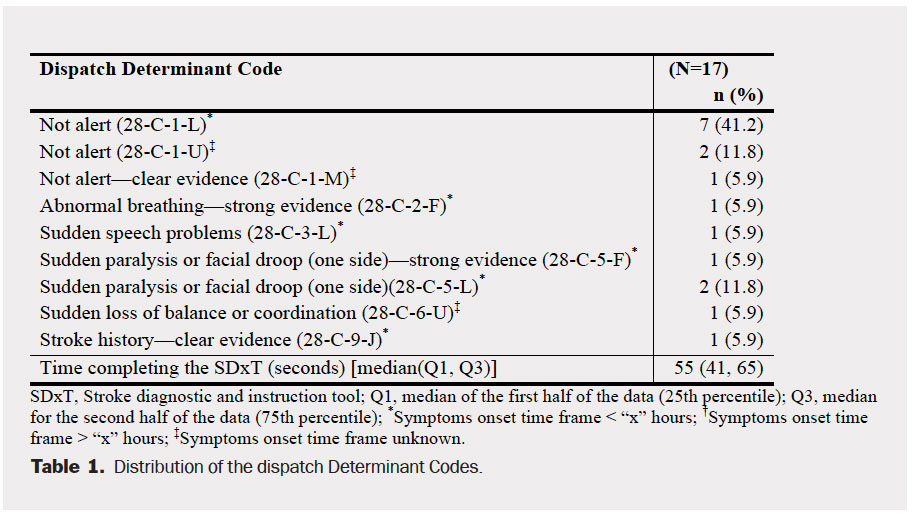 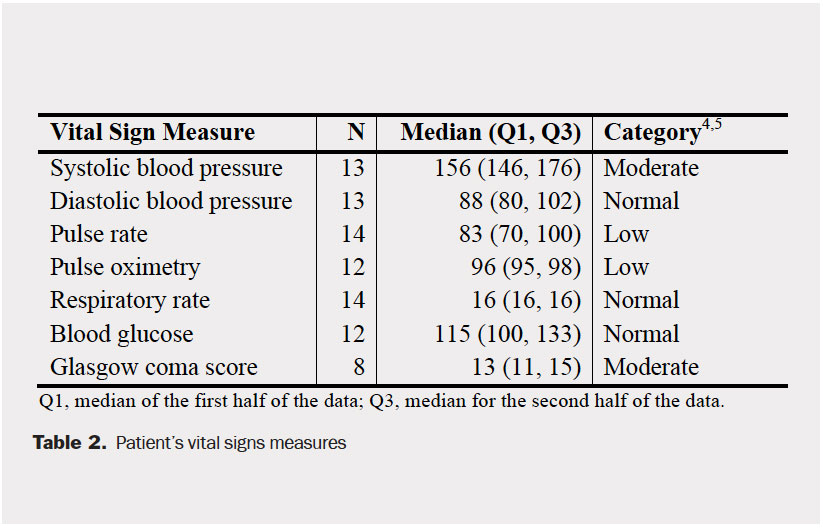 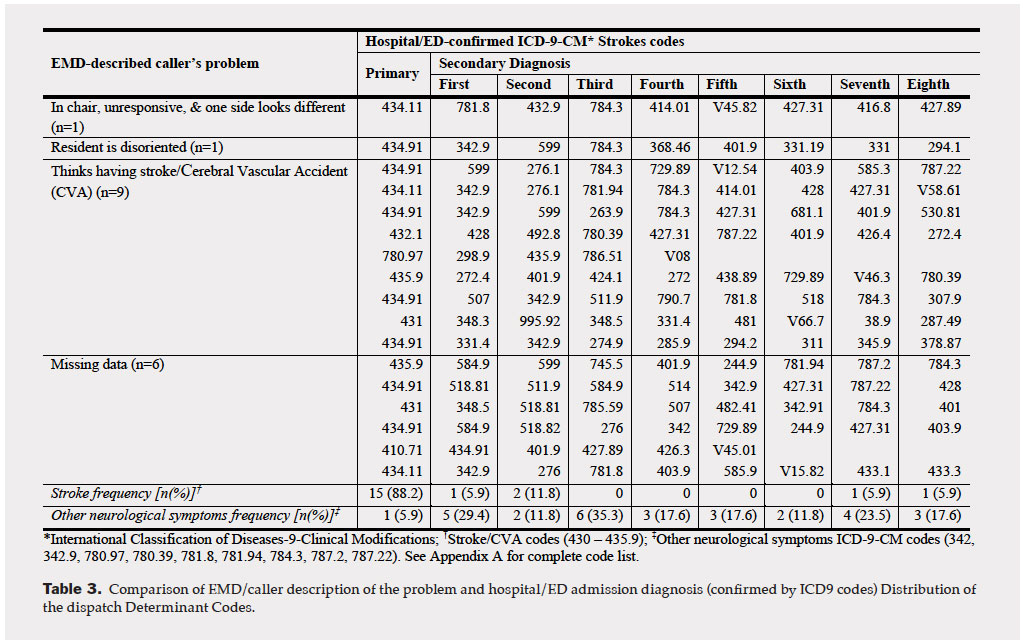 This study found that the result of "Cannot complete request" for all three tasks, as documented with the notation of (4,4,4) in the SDxT, is potentially a very strong predictor of stroke. While this represents a rather small subset of stroke patients in the original study, the (4,4,4) combination shows a somewhat higher predictive ability than the Tool overall, despite the fact that the SDxT was demonstrated, in the previous study, to be one of the highest-sensitivity stroke prediction tools yet studied. Specifically, when these 17 cases are treated as positive stroke evidence in the results of the original study, the sensitivity and positive predictive value are increased by 1.0% and 1.6% respectively (87.4%, 21.6%, new values). Based on the above findings, the SDxT should be modified to include a result similar to the existing clear evidence of stroke or strong evidence of stroke categories (depending on the results of further studies with larger samples sizes) for cases where the (4,4,4) combination is reported.

In addition to the three tasks contained in the SDxT—from which the (4,4,4) combination is achieved—the EMD also asks the caller a series of stroke-related Key Questions when using Protocol 28 (Stroke/TIA) and records any conditions found. "Not alert" was the most commonly recorded condition obtained in Key Questions for cases where the (4,4,4) combination was achieved in the SDxT, being found in more than half (58.8% [n=10]) of these cases. Although the deduction is made from a small cohort of 17 cases, it seems clear that being "Not Alert" makes it much less likely the patient could complete any of the tasks in the SDxT. And while a number of patients with a "Not Alert" condition were able to complete at least one SDxT task in the original study,7 it appears that the "Not Alert" condition combined with the inability to complete any task is unusually highly correlated with hospital-confirmed strokes. This suggests more research is needed to investigate the relationship between the SDxT result, the Key Question answers, and the hospital-confirmed stroke finding. Specifically, if the "Not Alert" Key Question answer (or combination of "Not Alert" with other Key Question answers) is found in larger studies to be as predictive of hospital-confirmed stroke as it appears here, the SDxT may be unnecessary when these Key Question answer combinations are present.

In four cases, the EMD actually overrode the SDxT result of "Unable to complete diagnostic" to a result of either clear evidence (2 cases) or strong evidence (2 cases) in the final dispatch code (Table 1). In these cases, the EMD most likely recognized a known stroke symptom, equivalent to one evaluated in the SDxT, that was provided verbally by the caller prior to using the SDxT.

Case audio was not available to determine exactly what the caller said in response to EMD questions. This could have been useful to find more details as to the reason the patient could not complete any of the three tasks in the SDxT, and in determining the reason for the EMD overrides in the four cases in which they occurred. Also, because of the small size of the group of patients who could not complete any of the SDxT tasks, there is a chance that we have overestimated the predictive effect of this outcome on the determination of a hospital-confirmed stroke. Therefore, a larger follow-up study is underway to compare the predictive ability of this cohort to that of other dispatch determinants.

Every one of the cases in which patients could not complete any of the three tasks listed in the SDxT resulted in a hospital-confirmed stroke. Given this very strong predictive result, the SDxT could be improved by including such cases—currently categorized as "Unable to complete the stroke diagnostic"—into a different category, such as either clear evidence or strong evidence of stroke. Doing so will help ensure that strokes are being accurately identified, and studies have shown that accurate identification of strokes at dispatch leads to faster EMS response.8 Moreover, stroke symptoms may appear and then disappear over a short period of time, especially in transient ischemic attacks (TIAs), meaning that the dispatcher's use of the SDxT may be the only opportunity to record symptoms while they are occurring—a record that may help drive accurate paramedic or hospital identification of the problem after the symptoms have stopped. Given that "time is brain" in a stroke situation, such early and accurate identification of symptoms may make significant differences in stroke patients' outcomes.