Introduction: Emergency Medical Dispatchers (EMDs), at emergency communication centers that have implemented the Medical Priority Dispatch System® (MPDS) protocols, use scripted questions to interrogate people calling 9-1-1. Based on this interrogation, case determinant codes are assigned– to identify the specific patient condition and enable optimal allocation and deployment of resources to ensure appropriate field responses. MPDS determinant codes for both OBVIOUS and EXPECTED DEATH exist for patients that are clearly and irreversibly dead, or have a terminal illness accompanied by written "Do Not Resuscitate" (DNR) legal orders to forgo lifesaving measures. The ability of EMDs to effectively determine these OBVIOUS and EXPECTED DEATH outcomes has not previously been studied.

Objective: The study objective was to assess the EMD's ability to use emergency dispatch protocol's OBVIOUS or EXPECTED DEATH recommendations to effectively classify these cases as intermediate- or low-acuity priority level calls.

Results: Overall, unquestionable death in the priority response classifications of BRAVOand OMEGA-level codes were coded correctly by the EMD in 98.5% of all cases, as indicated by the paramedics' decision not to transport upon arrival. The reasons for transport included: local protocols, inability to locate DNR and paramedic intuition.

Conclusion: Low transport frequency for determinant descriptors OBVIOUS and EXPECTED DEATH cases demonstrates the ability of EMD's to correctly classify cases of irreversible death. A substantial number of the transports were due to the inability of the responders to locate a DNR.

Emergency Medical Services (EMS) system administrators and medical control physicians must make critical decisions with respect to the resources that will be deployed to emergencies. Correctly matching patient need to the type of response sent, requires a robust medical dispatch triage process, completed by a trained and certified emergency medical dispatcher (EMD).1, 2 The Medical Priority Dispatch System® (MDPS) is a systematic, unified set of calltaking protocols that use scripted questions to interrogate callers. Categorization using MPDS Determinant Codes provides specific response assignments of available resources, including Advanced Life Support (ALS), first responders, transport ambulances, and other auxiliary response vehicles or personnel.3 The MPDS non-linear response matrix (Fig. 1); illustrates the baseline priority levels (Omega [Ω], Alpha [A], Bravo [B], Charlie [C], Delta [D], and Echo [E]) in relation to the two variables they are derived from: resource type, and the time-urgency of the case.

High-level emergencies – ECHO and DELTA – require more resources and a faster response, since the goal is to get to the patient as quickly as possible to reverse the negative effects of a critical injury or illness.4

The MPDS Cardiac Arrest Protocol (Protocol 9) is designed to achieve an ECHO- or DELTA-level dispatch determinant code rapidly when a cardiac arrest is "workable" and the patient has not reached the point of irreversible (biological) death (Fig. 2). The term "workable" identifies the patient's condition as potentially responsive to lifesaving procedures such as cardio-pulmonary resuscitation (CPR), the use of an automatic external defibrillator, and/or cardiac medications such as epinephrine, vasopressin, and amiodarone. The American Heart Association (AHA) published a study which explains the best chance for survival in cardiac arrest patients is when hands-on CPR is initiated within 2 minutes of the onset of cardiac arrest and an AED is used within 4 minutes.5 If the right resources are not sent immediately, rapid defibrillation may not occur within this time window.

Making a distinction between workable cardiac arrest patients and those that are unquestionably (and irreversibly) dead, is an important function of the EMD; it can help reduce unnecessary lights-and-siren responses, and conserve scarce EMS resources. Further, paramedic responses to terminally ill patients in cardiac arrest can create ethical problems for EMS.6

Conversely, MPDS Protocol 9 (Fig. 2) also contains several codes for cases of unquestionable death – where the patient is determined to be non-salvageable (biologically dead): OBVIOUS DEATH – unquestionable (BRAVO priority-level determinant [9-B-1]) and EXPECTED DEATH –unquestionable (OMEGA priority-level determinant [9- Ω -1]). A DELTA priority-level determinant (9- D-2) is assigned when the case appears to be a biological death, but the caller is uncertain about the patient being "beyond any help," or is uncertain about the condition of irreversible death. Determining the ability of these codes to correctly predict the findings of the responding EMS crews will help system administrators and medical control physicians make better decisions about the use of ALS and rapid response resources to cases recorded by the EMD as unquestionable death. This study examines the MPDS determinant codes for OBVIOUS DEATH and EXPECTED DEATH unquestionable death: 9-B-1, and 9-Ω-1, along with their associated suffixes, and compares those codes to the responding EMS crews' determination of the patients' condition at scene.

The objective of this study was to analyze the transport (to hospital) status of the patient and the ability of EMD calltakers to correctly classify obvious/expected death outcomes using the MPDS.

The MPDS Protocol 9 further classifies an OBVIOUS DEATH (9-B-1) with the following suffixes: a – Cold and stiff in a warm environment, b – Decapitation, c – Decomposition, d – Incineration, e – NON-RECENT death (greater than six hours), f – Severe injuries obviously incompatible with life, g – Submersion (NON-RECENT or greater than six hours), or h and i – Medical Director-approved additions. Likewise, the EXPECTED DEATH (9-Ω-1) determinant code's suffix list is: x – Terminal illness, y – DNR, or z – Medical Director-approved additions. The 9-B-1 code is achieved when the description from the caller indicates a situation in which CPR will not help the patient and the caller confirms it. At a glance, this may seem murky since conventional wisdom leans towards providing CPR instructions for all cardiac arrest patients. The OBVIOUS DEATH protocol is very specific in providing identifiers that describe non-viable, "dead patients". For example, CPR instructions will not be successful in case of a decapitation, or with a decomposing corpse.

Determinant Code 9-Ω-1 are cases involving terminal illnesses or the presence of a DNR order. The DNR order is a legal document that expresses the desire of the patient not to receive life-saving interventions in the event of a cardiac arrest.7 Family members or caregivers relay the content of these orders or the wishes of the patient. Many of these patients are under hospice care either in a facility or at a personal residence. The Determinant Code of 9-D-2 is generated when the suspected death of the patient is uncertain or "questionable", according to the caller. Specific Key Questions are asked of every caller reporting an expected or obvious death, verifying the caller is certain the patient is not viable: In OBVIOUS DEATH cases "Do you think s/he is beyond any help?", and "Are you certain we should not try to resuscitate him/her?" in EXPECTED DEATH cases. These final Key Questions provide the EMD with confirmation that the OBVIOUS DEATH and EXPECTED DEATH determinations are correct.

Primary endpoints in this study were the percentage of OBVIOUS or EXPECTED DEATH cases transported to hospitals, and the reasons for transport. The secondary endpoint was the reason for non-transports.

STATA software for Windows® (STATA Statistical Software: Release 13.1 ©2013, StataCorp, College Station, TX, USA) was used for data analysis. Descriptive statistics, such as frequency and percentage, were used to determine the percentage of transported cases and to tabulate the reasons for transport and non-transports status.

The most common CAD reason for non-transport were Dead on Arrival (DOA), and Call Canceled (a categorization indicating the patient was not transported to the hospital) (Table 1).

Categorization of transported cases by agency and MPDS determinant codes, yielded a similar pattern (Table 2). Overall transport to the hospital frequency was 1.5% for both OBVIOUS and EXPECTED unquestionable death Determinant Codes combined (9-B-1 and 9-Ω-1). The OBVIOUS or EXPECTED DEATH questionable code (9-D-2) frequency was 8%, – more than four times higher. There were slight overall differences among the three agencies; EMSA transporting 3.3%, MEDIC 1.8%, and Polk Co. 0.79%.

Reasons why patients were transported to the hospital varied (Table 4). The majority (65%) of these cases had a Cardiovascular – Cardiac Arrest condition. 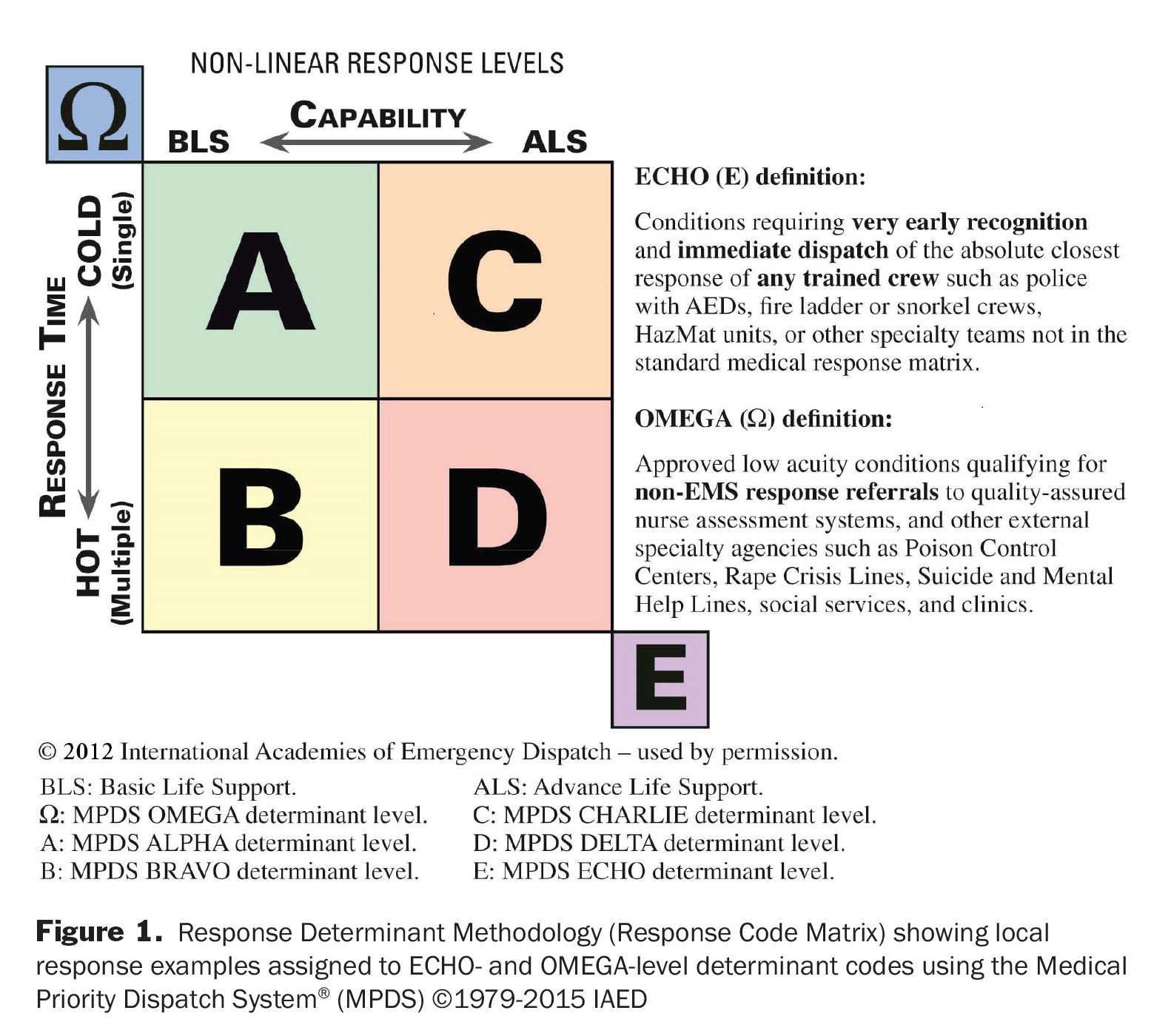 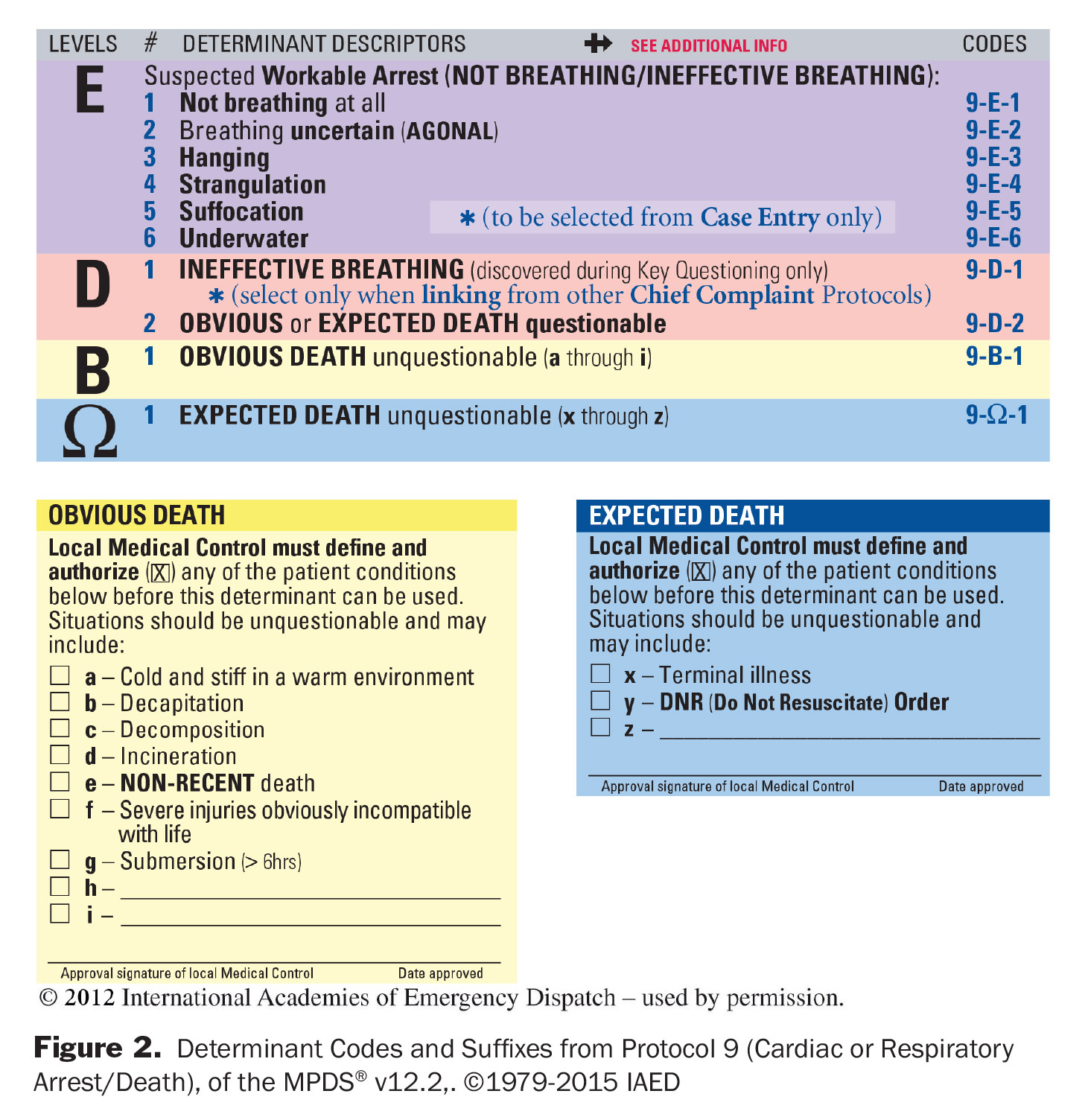 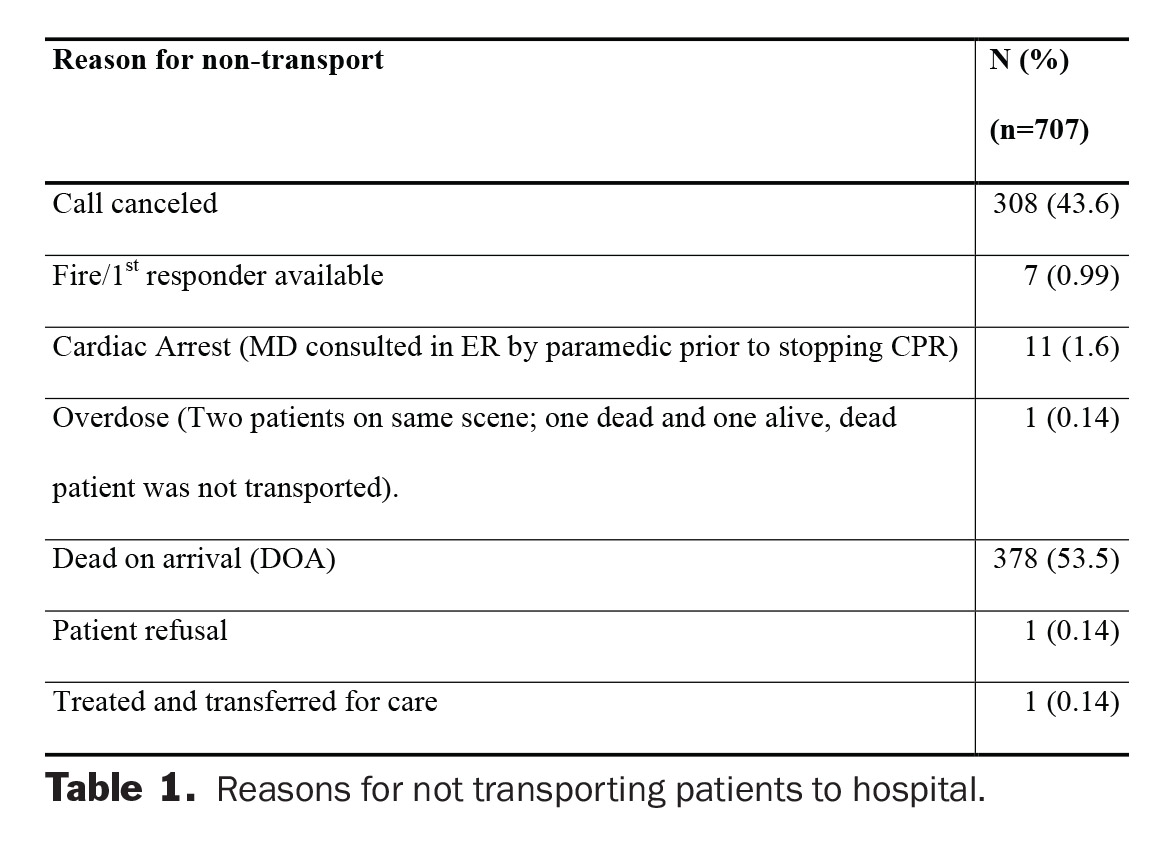 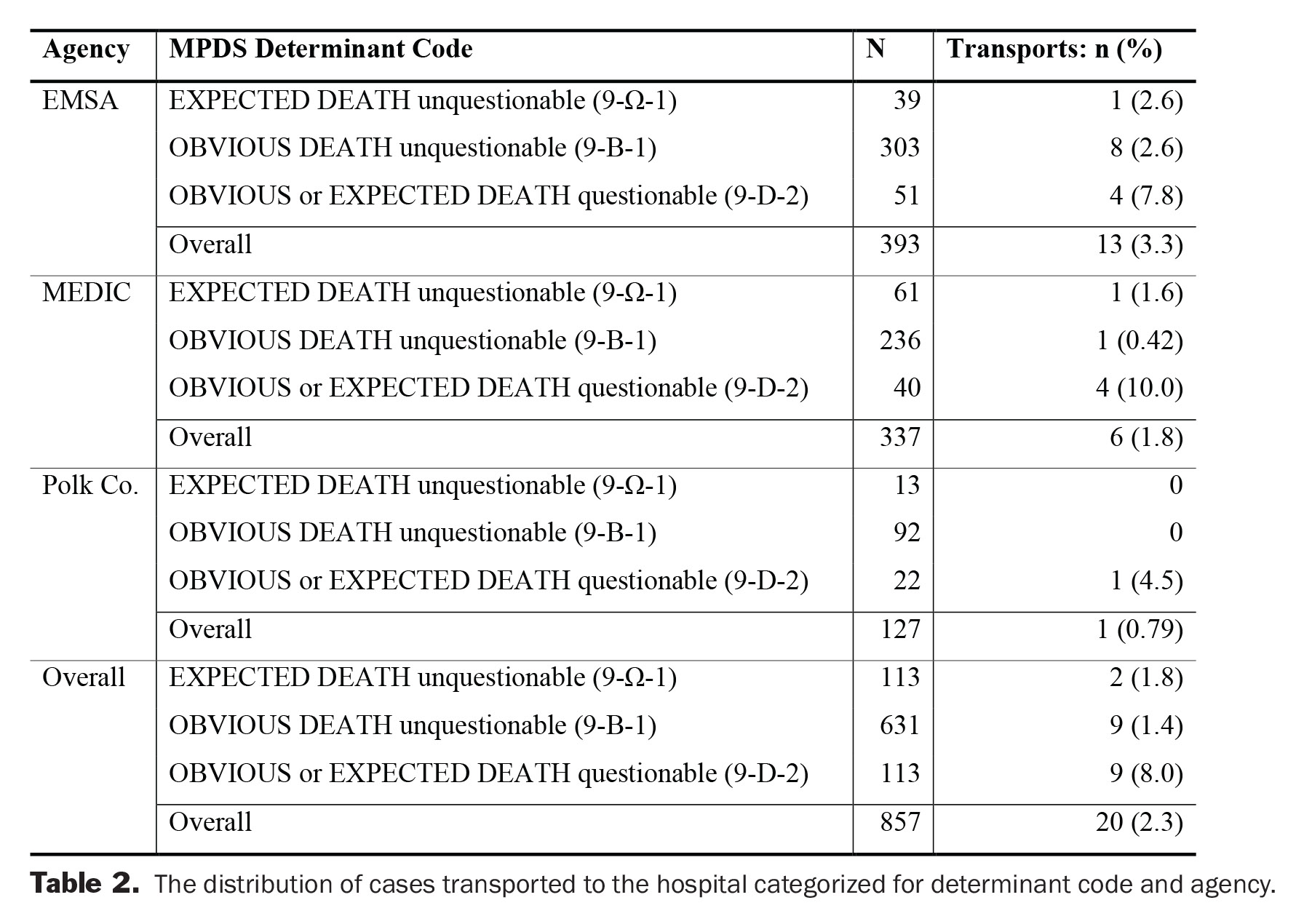 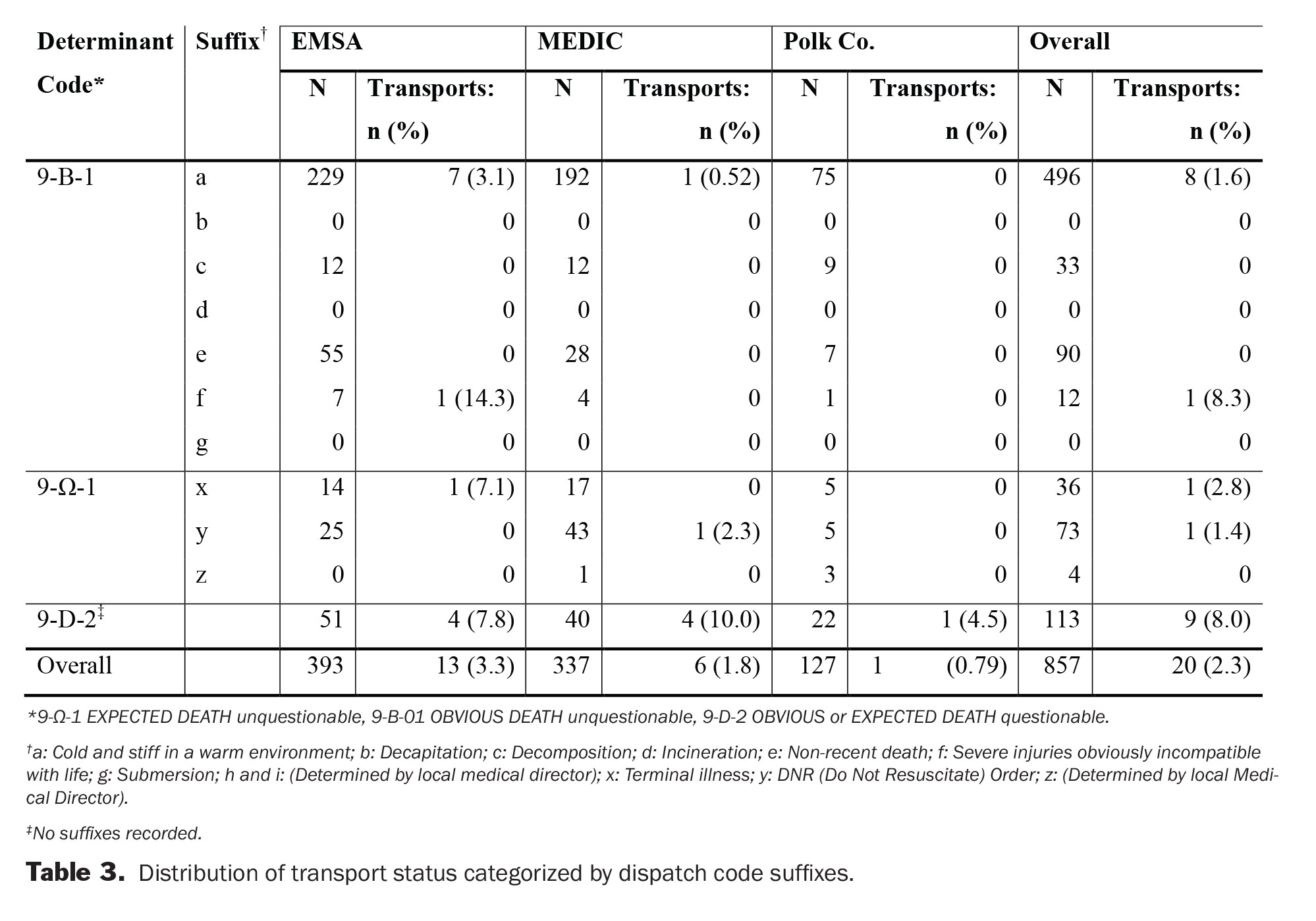 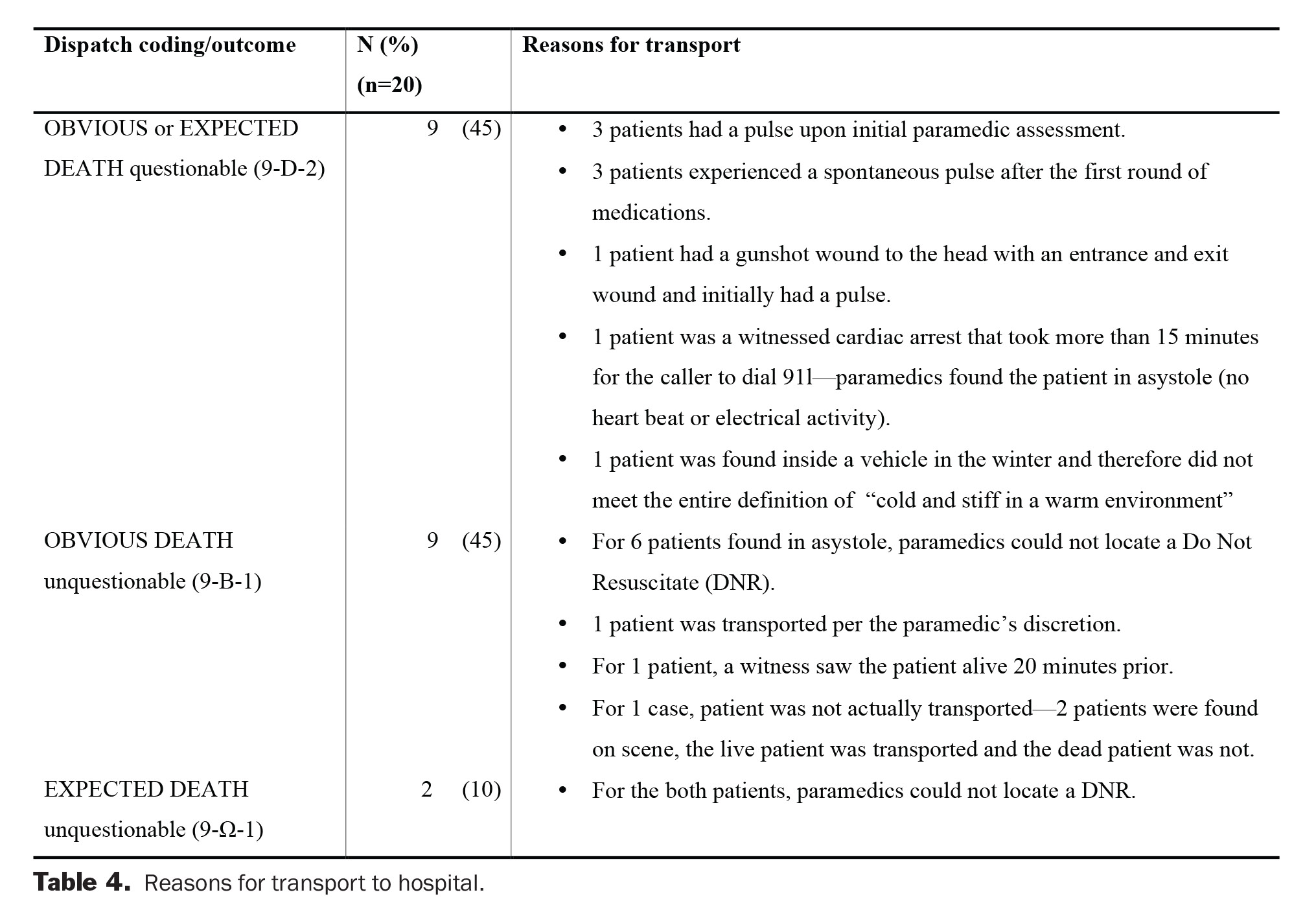 The findings clearly show the determinant coding of OBVIOUS DEATH and EXPECTED DEATH (both questionable and unquestionable) as defined in the MPDS is working. Further, some cases were transported for reasons other than patient viability. Taking this into consideration, the ability of the EMD to correctly classify unquestionable death cases increases to 98.5%. These results clearly identify potential opportunities for conserving EMS response resources, within the Protocol 9 determinant codes. EMS system administrators, operations managers, and medical control physicians can take this into account while developing deployment plans and resource allocations.

By conserving scarce ALS and defibrillator-equipped first responders that may currently get dispatched to OBVIOUS DEATH and EXPECTED DEATH cases, EMS systems could make those resources more readily available for the salvageable cases of cardiac arrest.8 This evidence-based approach to response and resource deployment will assist with unit availability while reducing response times to patients with treatable conditions.

Laws, statutes, internal policies, and paramedic intuition are factors in the decision to transport cardiac arrest patients. Some of these factors may not be consistent with the MPDS protocols; therefore, there is the potential for a small number of transports even with the responder findings of an OBVIOUS DEATH or EXPECTED DEATH unquestionable condition. Because the 9-1-1 centers studied were all IAED-Accredited Centers of Excellence, a high level of MPDS protocol compliance is expected overall. Each case in the study sample of 9-1-1 calls was not reviewed individually for compliance, so it is possible that MPDS protocol was not followed completely by 9-1-1 dispatchers in all cases.

Trained EMDs, using the referenced version of the MPDS were able to identify conditions of irreversible death (OBVIOUS and EXPECTED death) with a high degree of accuracy, as determined by the transport decision of the ambulance crew attending the patient. Further, a substantial percentage of the transports were due to the inability of the responders to locate a DNR. The relatively high percentage of transports among OBVIOUS or EXPECTED DEATH questionable (9-D-2) cases supports the notion that the MPDS protocol is effective in identifying such questionable cases, where a viable patient may exist. MPDS-accredited agencies interested in reducing over-response can use the OBVIOUS and EXPECTED DEATH determinant codes to optimize resource allocation in cases of irreversible death.