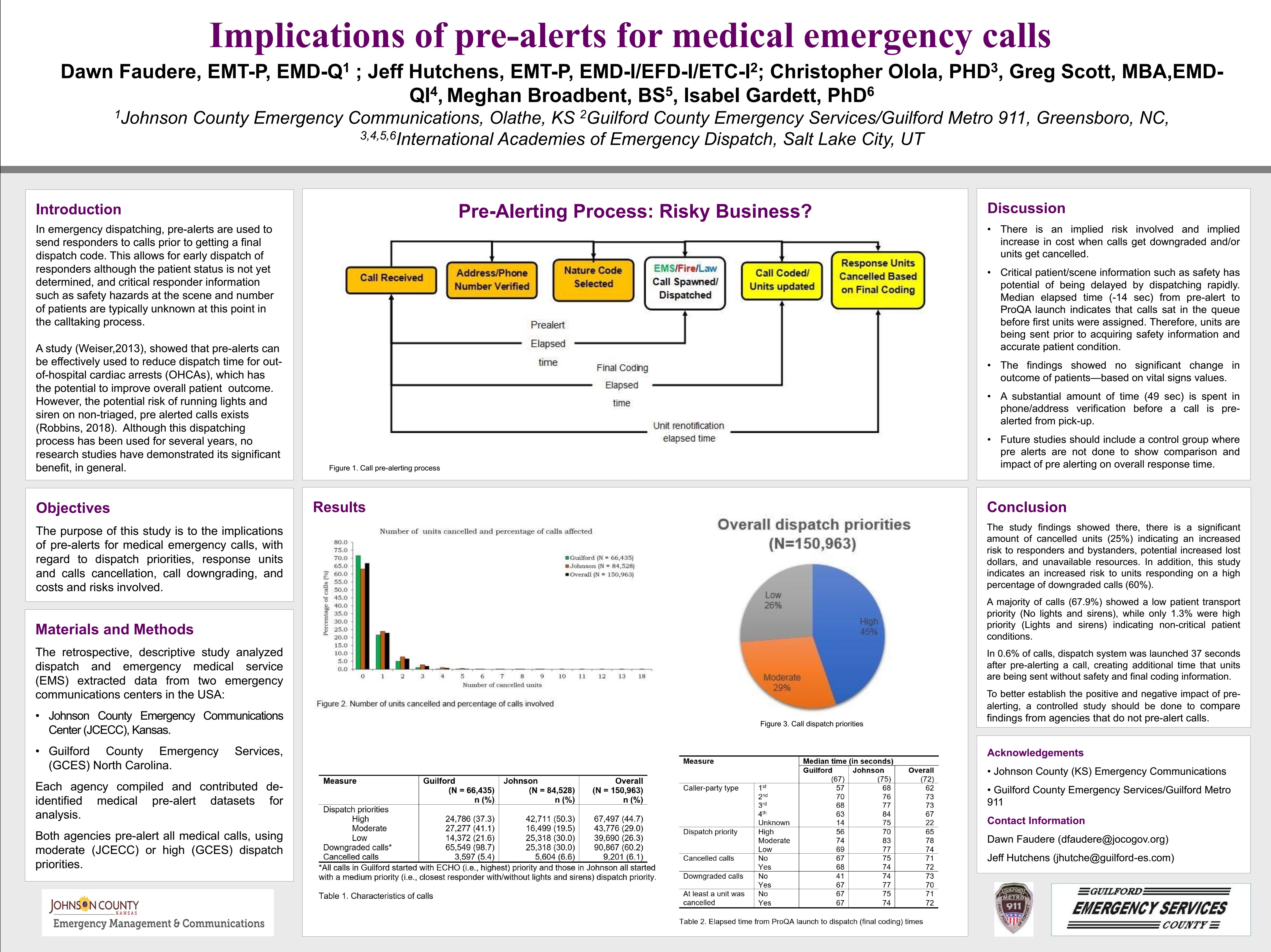 Introduction: In emergency dispatching, pre-alerts are used to send responders to calls prior to getting a final dispatch code—assigned using an emergency dispatch system. Although this dispatching process has been used for several years, no research studies have demonstrated its significant benefit, in general. However, a study published in 2013, showed that pre-alerts can be effectively used to reduce dispatch time for out-of-hospital cardiac arrests (OHCAs), which has the potential to improve overall patient outcome. As emergency calls are received, the call is entered in the Computer Aided Dispatch (CAD) system as soon as an address, phone number and the request for emergency medical services (EMS) is known to the calltaker. This allows for early dispatch of responders although the patient status is not yet determined, and critical responder information such as safety hazards at the scene and number of patients are typically unknown at this point in the call-taking process. Once the initial pre-alert to responders the calltaker questions the caller using the Medical Priority Dispatch System (MPDS®), to find the determinant which indicates low or high priority. The responding units are then given the updates and will either downgrade their response, cancel their response, or continue with lights and sirens. Research studies have also demonstrated the potential risk of running lights and siren on non-triaged, pre-alerted calls.

Objectives: The goal of this study was to determine the implications of pre-alerts for medical emergency calls, with regard to dispatch priorities, response units and calls cancellation, call downgrading, and costs and risks involved.

Results: A total of 150,963 calls used in the study, of which 90,867 (60.2%) were downgraded and 9,201 (6.1%) were cancelled. This indicates a waste of valuable resources and an implied increase in cost and risk. Additionally, in 25.0% of the calls, at least a response unit was cancelled and 60.2% were downgraded, and 1.3% were transported with high priority (Lights and sirens). A median elapsed time (-14 sec) from pre-alert to ProQA launch indicates that calls sat in the queue for median time of 14 seconds before first units were assigned. Therefore, units are being sent prior to acquiring vital safety information and accurate patient condition.

Conclusions: The study findings showed there is a significant of cancelled units and downgraded calls, indicating an increased risk to responders and bystanders, potential increased lost dollars, and unavailable resources. In addition, the very small percentage of calls where patients were transported with high priority indicates unnecessary pre-alerts for non-critical patient. Study findings demonstrated that calls spent a substantial amount of time in queue and units were sent without safety/final coding information. To better establish the positive and negative impact of pre-alerting, a controlled study should be done to compare findings from agencies that do not pre-alert calls.