Background: Expanding the role of evidence-based practice (EBP) in emergency medical services is a matter of increasing importance to researchers and practitioners alike. However, this movement toward EBP has not yet been applied to one critical area of prehospital care: emergency dispatching. The primary reason for this gap is that emergency dispatchers (EDs) struggle to develop a research culture able to produce enough well-conducted studies to move toward true EBP. One starting point with documented potential for building the research capacity in a field is to develop practitioners' familiarity with research concepts—their "research literacy"— via a research literacy intervention.

Objectives: The objective of this study was to determine EDs' levels of research literacy, as well as their willingness and ability to participate in research.

Results: Of the 85 EDs at study site, 68 (80.0%) participated in the study. A majority (60.3%) had at least read research related to their respective fields. The video increased several aspects of the EDs' research literacy, particularly their knowledge about some of the specific characteristics of research.

Defining and expanding the role of evidence-based practice (EBP) in emergency medical services (EMS) is a matter of increasing importance to researchers and practitioners alike.1, 2, 3, 4 Although definitions of EBP differ, the most commonly cited derives from the definition of evidence-based medicine, which is "the conscientious, explicit, and judicious use of current best evidence in making decisions about the care of individual patients.5 EBP, in other words, involves the gathering, evaluation, and application of the best-available research results for the purpose of optimizing outcomes in any field. Although evidence-based medicine was first defined in 1992, EMS has been slow in adopting evidence-based approaches, largely because the research base in EMS has simply not been large enough or grown fast enough to support them.6

Recently, this has begun to change. In 2008, the U.S. Federal Interagency Committee on EMS (FICEMS) and the National EMS Advisory Council (NEMSAC) organized the first National EMS Evidence-Based Guidelines Conference, bringing together stakeholders and experts to begin the process of developing evidence-based guidelines for practice in the EMS community.7 Since then, guidelines have been developed in a number of areas of prehospital medicine, with one peer-reviewed journal recently devoting an entire special issue to the subject.8, 9, 10, 11, 12, 13 However, this movement toward EBP has not yet been systematically applied to one critical area of prehospital care: emergency dispatching.

The practice of emergency dispatch has not yet generated sufficient research to rely completely on EBP. Systematic research in emergency dispatch has been sparse and has focused almost exclusively on a few high-visibility topics (such as the provision of telephone CPR) rather than on the development of an understanding of comparative outcomes among competing EMD practices.14, 15 As in other professional and medical fields, the aim of emergency dispatch should be the development of an evidence base both broad and deep enough to develop and support EBPs. However, emergency dispatchers (EDs) and dispatch researchers have struggled to develop sufficient well-conducted studies to move toward true EBP. Two of the primary barriers to the undertaking of this aim have been the small number of researchers and the lack of a "culture of research" in the field of emergency dispatch. To develop such a culture, ED will need to do what social work, education, and other fields have done in the past 20 to 30 years: develop a broad network of practitioner researchers.16, 17 Practitioner researchers are professionals working in the field—in this case, EDs—who either collaborate with researchers or learn to conduct studies on their own. The value of practitioner research is clear: conducting research moves practitioners toward acceptance of EBPs when they are developed; practitioner research tends to be more practically-oriented and takes on questions of interest to other professionals in the field; and conducting research gives practitioners a broader understanding of their own work and the reasons for their administrators' decisions.18, 19, 20

There are, however, significant barriers to developing a network of practitioner researchers in any field, including resistance from practitioners themselves and cultural barriers between researchers and practitioners, as well as lack of organizational support.21, 22 One starting point with documented potential for overcoming these barriers and building the research capacity in a field is to develop practitioners' familiarity with research concepts—their "research literacy."23 Research literacy is "the cognitive and social understanding of the basic purpose, process, and value of research."24 Research literacy interventions have been used to increase voluntary participation in research studies by patients and to teach research practices in the context of college and graduate school coursework.25, 26, 27 These interventions have demonstrated that even small increases in research literacy lead to significant increases in participation (as subject or researcher), as well as increases positive feelings toward research and researchers—a necessary underpinning for the adoption of EBP.

The hypothesis in this study was that, after watching an educational video about research, EDs would demonstrate increased research literacy, with a correspondingly increased desire to participate in, and belief in their ability to provide valuable contributions to, the research process.

The objective of this study was to determine EDs' levels of research literacy, as well as their willingness and ability to participate in research, before and after watching a research education video.

This descriptive, prospective, and non-randomized cohort study was conducted from March 19-29, 2014, with EDs at an emergency communication center: Valley Emergency Communication Center (VECC), West Valley, Utah, USA. At the time of this study, VECC was not an International Academies of Emergency Dispatch (IAED)-Accredited Center of Excellence (ACE) in Medical, Fire, or Police emergency dispatching—but they are now ACE in Medical (as from October 2015). The ACE status is the highest distinction in 9-1-1 emergency communication services. ACE agencies demonstrate sustained high compliance to the dispatch discipline specific protocols and adhere to a set of international best-practice standards developed specifically for the emergency dispatch profession. Thus, although the center was not ACE accredited at the time, they had already begun the review process required for that certification, indicating they were already adhering to the field's accepted best practices (including, for example, the use of scripted protocols and the regular, standardized review of emergency calls).

This was a descriptive study; therefore, no power estimations were feasible. All willing emergency dispatchers at VECC were enrolled into the study. Participants who did not complete the pre-intervention survey, watch the entire video, and complete the post-intervention survey were excluded from the final study target sample—the sample used in the study group comparative analysis.

Descriptive statistics, such as frequencies and percentages, were used to analyze the distributions of research literacy levels and other categorical measures. Otherwise, where data was significantly skewed, median and interquartile ranges were used. Differences between study groups' categorical study measures were assessed using Chi-square test. For normally distributed continuous measures, mean (plus standard deviation) and 95% confidence intervals were used to describe their distributions—and the Student t-test assessed inter-group mean differences. However, the Mann-Whitney U-test was used to assess group differences for skewed data. The significance of the differences was assessed at the 0.05 level.

There were a total of 85 EDs at VECC during the study period. Of the 85 EDs, 68 (80.0%) participated in the study. A significant proportion of study participants were line calltaker/dispatchers (EDs) (72.1%) and/or supervisors (14.7%), with 3-5 years of work experience (45.6%) (Table 1). The participants completed the study mostly while at their work consoles (77.9%) during day or night shifts (45.6% and 39.7%, respectively). Every participant held certifications in medical, fire, and police dispatch, with about 12% holding instructor certifications as well. Finally, a majority (60.3%) of the participants were actively reading, or had read, published research related to emergency dispatch.

Watching the video made several significant contributions to increasing the EDs' knowledge about research (Table 2). The video significantly increased the participants' ability to differentiate between qualitative and quantitative research (increased by 52%, p=0.044), correctly define the research process as systematic and methodical (increased 4-fold, p<0.001), and recognize that experiments compare different test conditions (increased 5-fold, p<0.001). However, although the video substantially increased the EDs' overall research literacy level from 49.0% to 55.3%, the difference was statistically not significant (p = 0.120).

Interest in participating in research

After watching the educational research video, more participants were willing to participate in research compared to before watching the video (67.7% and 79.4%). Although the increase in the level of interest was not statistically significant (odds ratio [95% confidence interval]: 1.84[0.86, 3.98]; p=0.120), the 11.7% increase was substantial and demonstrated one potential positive impact of the video.

Surprisingly, after watching the video, participants' perception of the importance of publishing research articles to share what was learned, and writing up research reports so that findings can be applied, slightly decreased—although the difference was not statistically significant (Figure 1). On the other hand, although also not significant, a slightly lower number of participants, post-video, believed that sharing research findings through social media or video was not important (p = 0.094). Thus the findings about the importance of sharing research seemed to be contradictory. 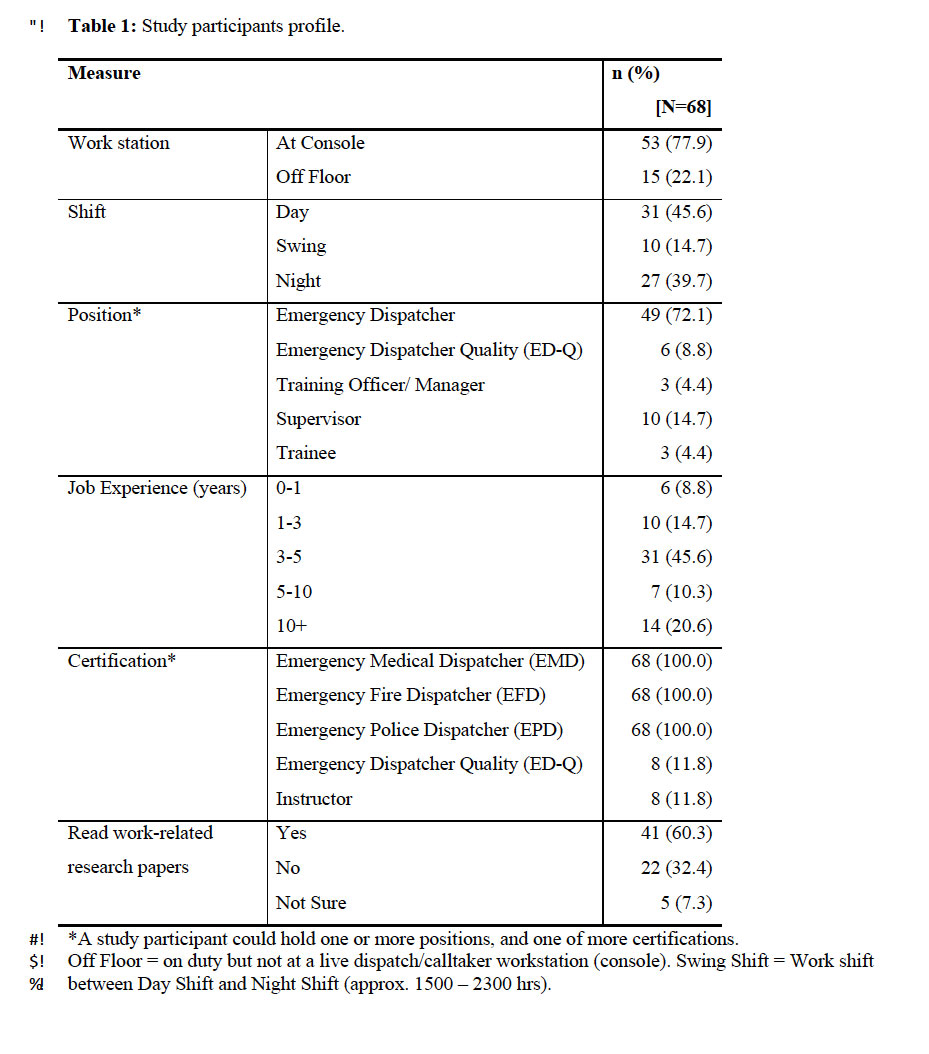 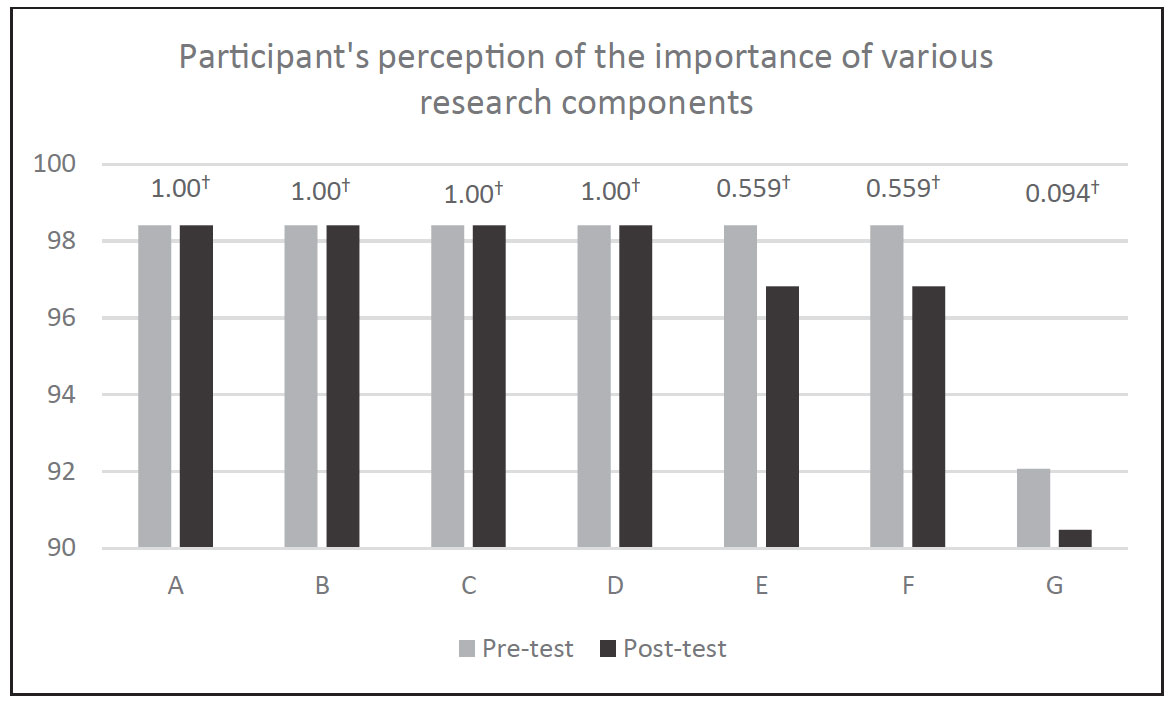 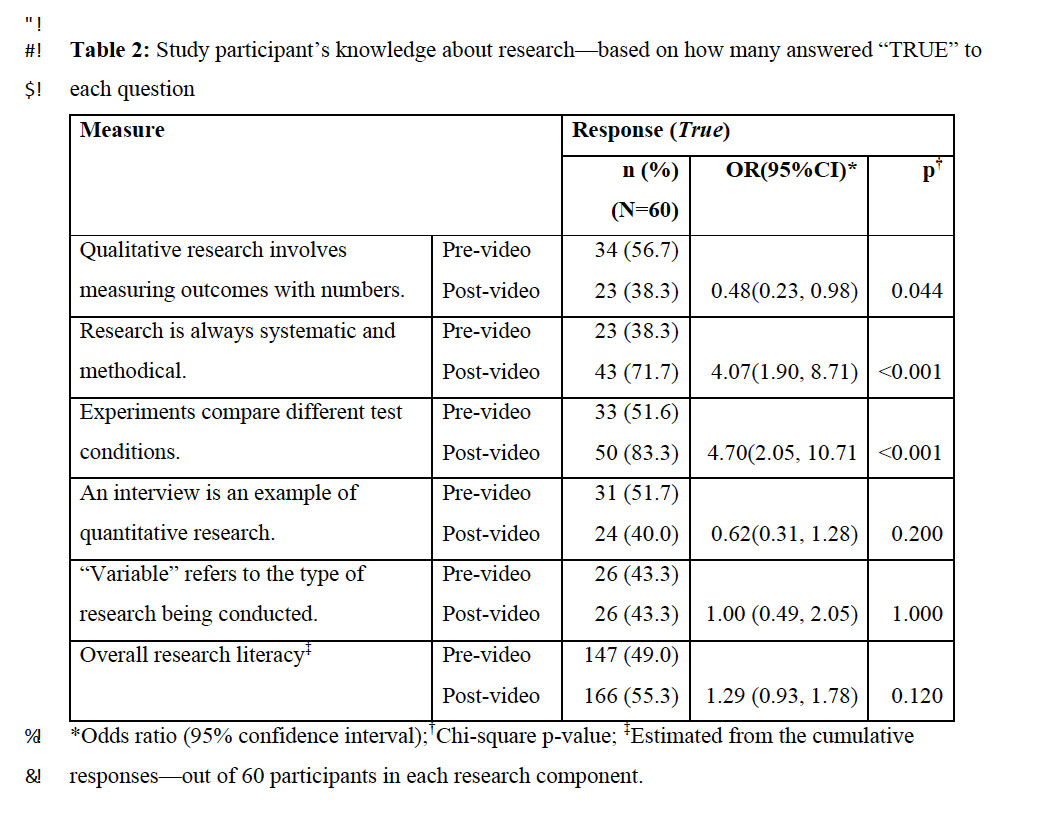 One surprising result was that the video appeared to have had a negative impact on the participants' perceptions of sharing research findings on social media or video. In the pre-intervention survey, a larger proportion of participants perceived that it is important to share findings via social media or video, compared to in the post-intervention survey (92.1% and 90.5%, respectively). Although the difference between these two proportions was not statistically significant, the result suggested further investigation into this finding in a future study. It is possible that this finding was an artifact of the video itself. The video focused so heavily on how research relates to dispatchers and informs daily practice that it may have inadvertently suggested that the key importance of research is its immediate use in the communication center in which the research was conducted. The importance of sharing results through publication may have been so downplayed that its importance was undermined in the minds of the participants. Future studies will attempt to parse out this finding.

There were sample size and study setting limitations in this study. First, a relatively small sample size (60 participants) completed the pre-and post-intervention (video) survey. Second, the study only reflects the perspectives of one agency, which might have its own research culture. Finally, it was not possible to say if watching the video represents a long-term change in knowledge and interest, or simply a short-term effect. Therefore, the study findings should be interpreted and applied with caution. A future study using a larger sample size with a longer time-frame to gauge learning and attitudes is necessary to validate this study's findings.

The investigators would like to thank the emergency dispatchers from VECC who voluntarily participated in this pilot study. The authors also thank Jordan Sebresos, IAED Instructional Designer, for his help in narrating the research content in the educational video. Additional acknowledgment goes to Brandee Rowley, IAED Administrative Assistant, for coordinating all the study logistics, and Andrew Wilcox, IAED intern and Salt Lake Fire Department paramedic, for his initial editing of the manuscript.

Ethical Approval: The study was approved by the International Academies of Emergency Dispatch Institutional Review Board.

Conflict of interest: None