Background: Seizures are episodes of sudden, severe, disorganized neurological activity in the brain, characterized by uncontrolled movement and, in many cases, altered consciousness. Seizures account for 1% of all emergency department visits, and are a leading cause of Emergency Medical Services (EMS) activation and transport. Patients who experience a seizure with no medical history of seizure disorder challenge the prehospital provider to identify an underlying cause for the event and attempt to treat immediately.

Objectives: This study aimed to identify the clinical profile of cases with seizures, the etiological factors involved in seizures, and the number of seizure patients that received ambulance care and transport.

Methods: This cross-sectional, observational study was carried out on all patients who presented with seizures, at N.K.P. Salve Institute of Medical Sciences and Research Centre, India, from October 2010 to October 2012.

Conclusion: The relatively low percentage of seizure cases brought to the hospital emergency department via ambulance compared to the much higher percentage of patients with GTCS, high priority symptoms, and serious underlying etiology suggests a need for emergency medical ambulance service staffed with personnel qualified in the management of seizures, to render prehospital medical attention to this rural population.

Seizures are episodes of sudden, severe, disorganized neurological activity in the brain, characterized by uncontrolled movement and, in many cases, altered consciousness. In the pre-hospital care environment, as well as in the hospital emergency department, the typical seizure presents as Generalized tonic-clonic seizures (GTCS).1, 2, 3, 4

Seizures account for 1% of all emergency department visits and are a leading cause of Emergency Medical Services (EMS) activation and transport.5 The prehospital management of seizure patients focuses on aborting the seizure, preventing recurrence, identifying its etiology and treatable causes, and preventing further brain damage. The worldwide prevalence of active epilepsy is 4 to 10 per 1,000 individuals.6 Overall prognosis for seizure control is promising, and over 70% will enter remission.7 Patients who experience a seizure with no medical history of seizure disorder challenge the emergency care clinician to identify an underlying cause for the event and attempt to treat immediately. The present cross-sectional study was undertaken to study the clinical profile of cases with seizures and to study various etiological factors involved in epileptic seizures. This study identifies the common causes, clinical presentations, types of seizures, precipitating factors, metabolic abnormalities, Computed tomography/Magnetic resonance imaging (CT/MRI), electroencephalogram (EEG) findings, as well as the number and percentage of seizure patients that received prehospital care, including an ambulance transport.

The objectives in this study were to identify the number of seizure patients receiving pre-hospital care, and to study the clinical profile and etiological factors of these seizure cases.

This cross-sectional, observational cohort study was carried out on patients presenting with seizures who were admitted at N.K.P. Salve Institute of Medical Sciences and Research Centre, India, from October 2010 to October 2012.

The inclusion criteria were all patients who (1) presented to at the emergency department (ED) during the study period with seizures, (2) were age 12 years or older, irrespective of sex and associated illness, (3) had complete history and records at the time of the attention in the ED, and (4) volunteered to participate in the study.

Distribution of cases as per associated signs and symptoms revealed that a majority, 81.0%, of the cases had post-ictal confusional state, followed by 76.0% with frothing (Fig. 2).

The distribution of cases according to abnormality of laboratory investigations showed that a majority of cases (75%) had normal labs, followed by 7 (7%) with abnormal CSF findings (Table 2).

Table 3 shows the distribution of cases according to type of seizures, EEG findings and different etiologies. Out of 77 cases with GTCS, 71 (92.2%) had normal EEG. In SPS, 8 (72.73%) had normal EEG and in CPS, 5 (62.5%) with normal. The association between type of seizures and EEG fi ndings was statistically signifi cant with Chi-square Test (p-value of 0.0152) via Monte Carlo approach. 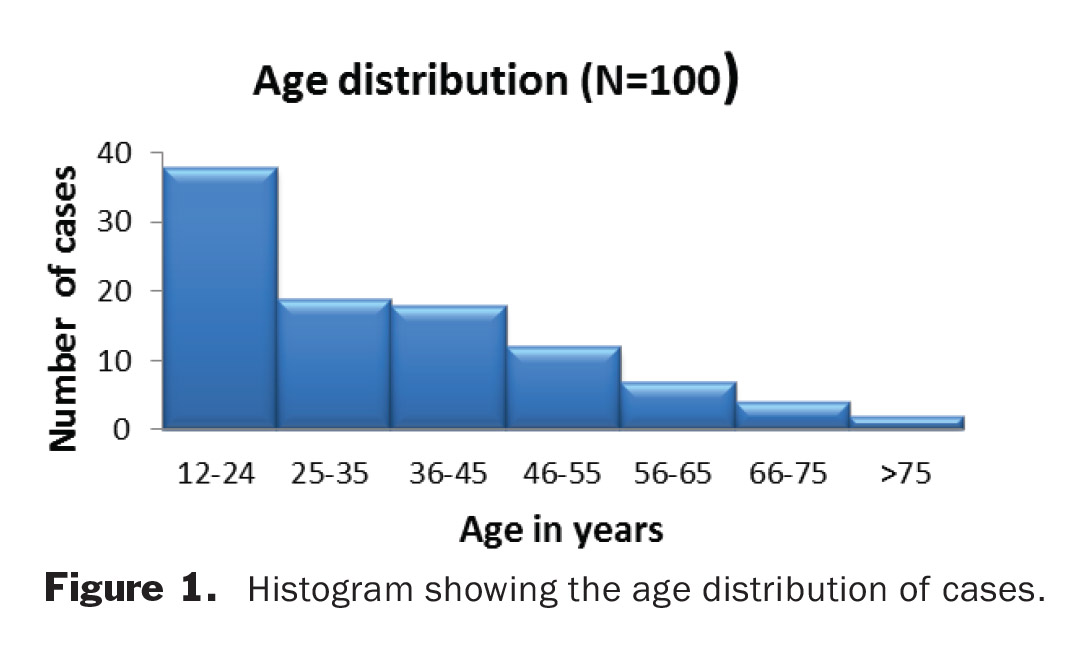 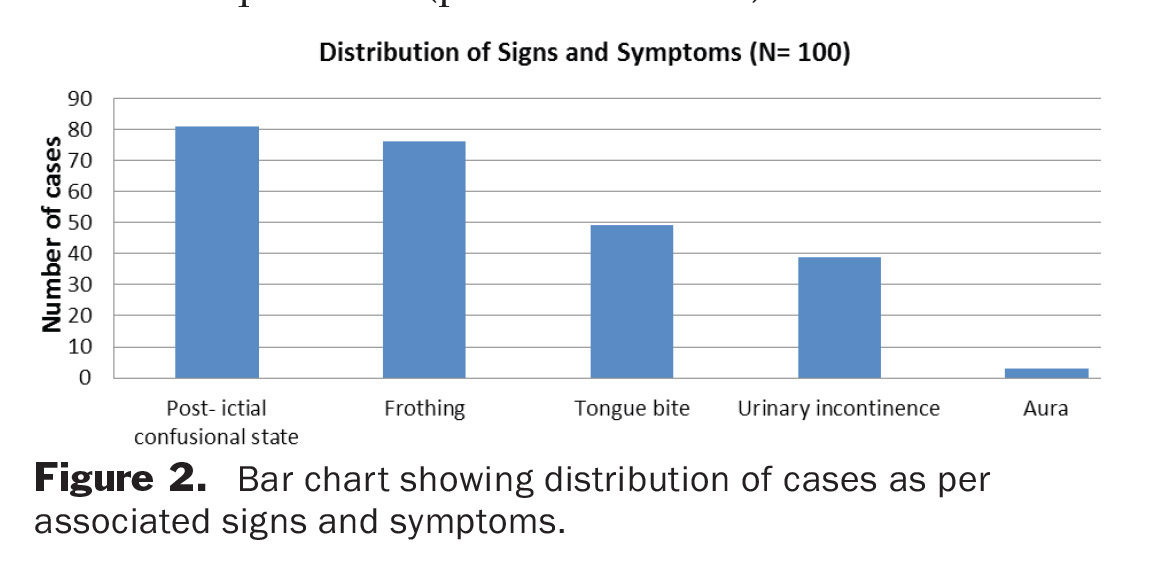 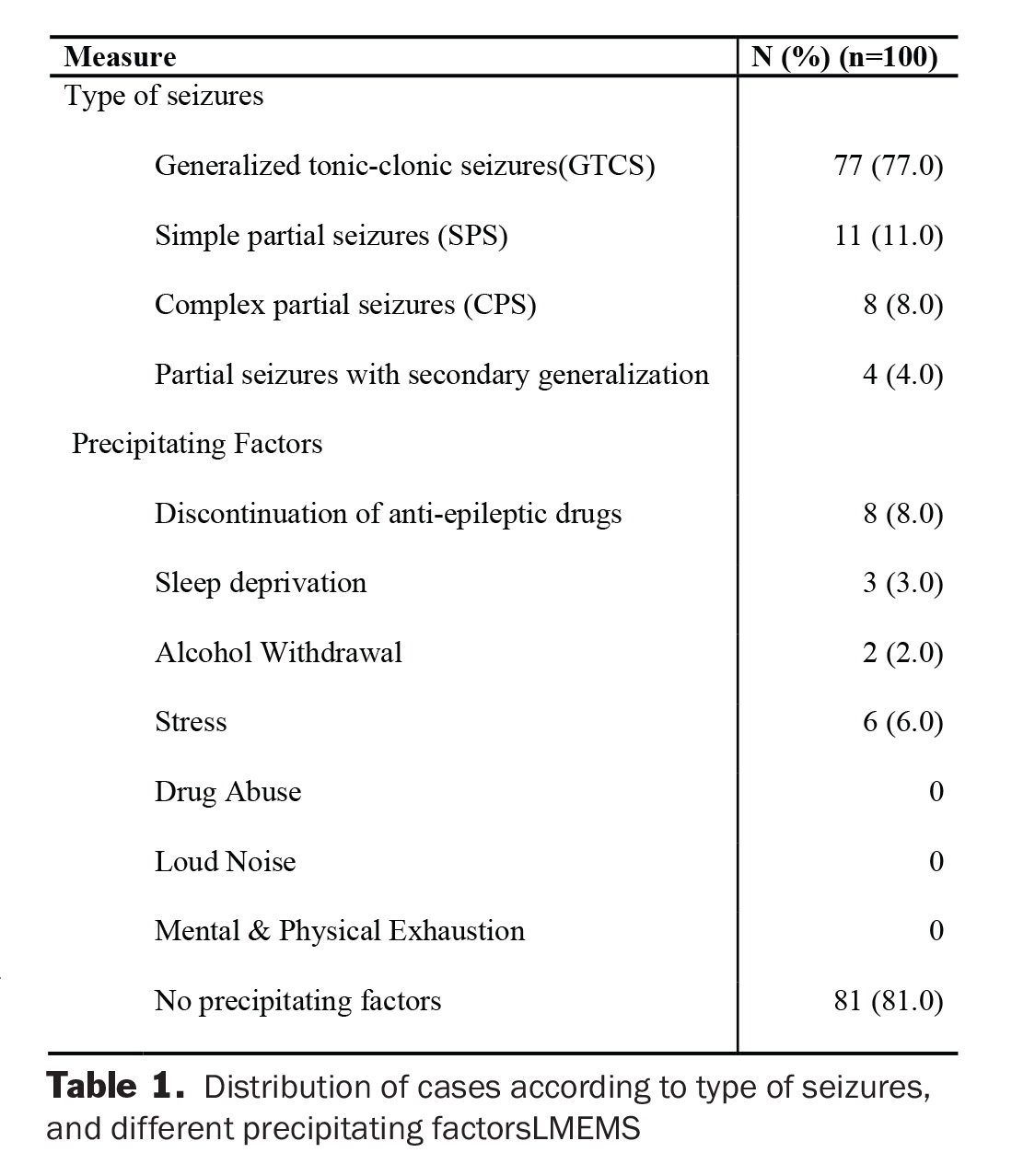 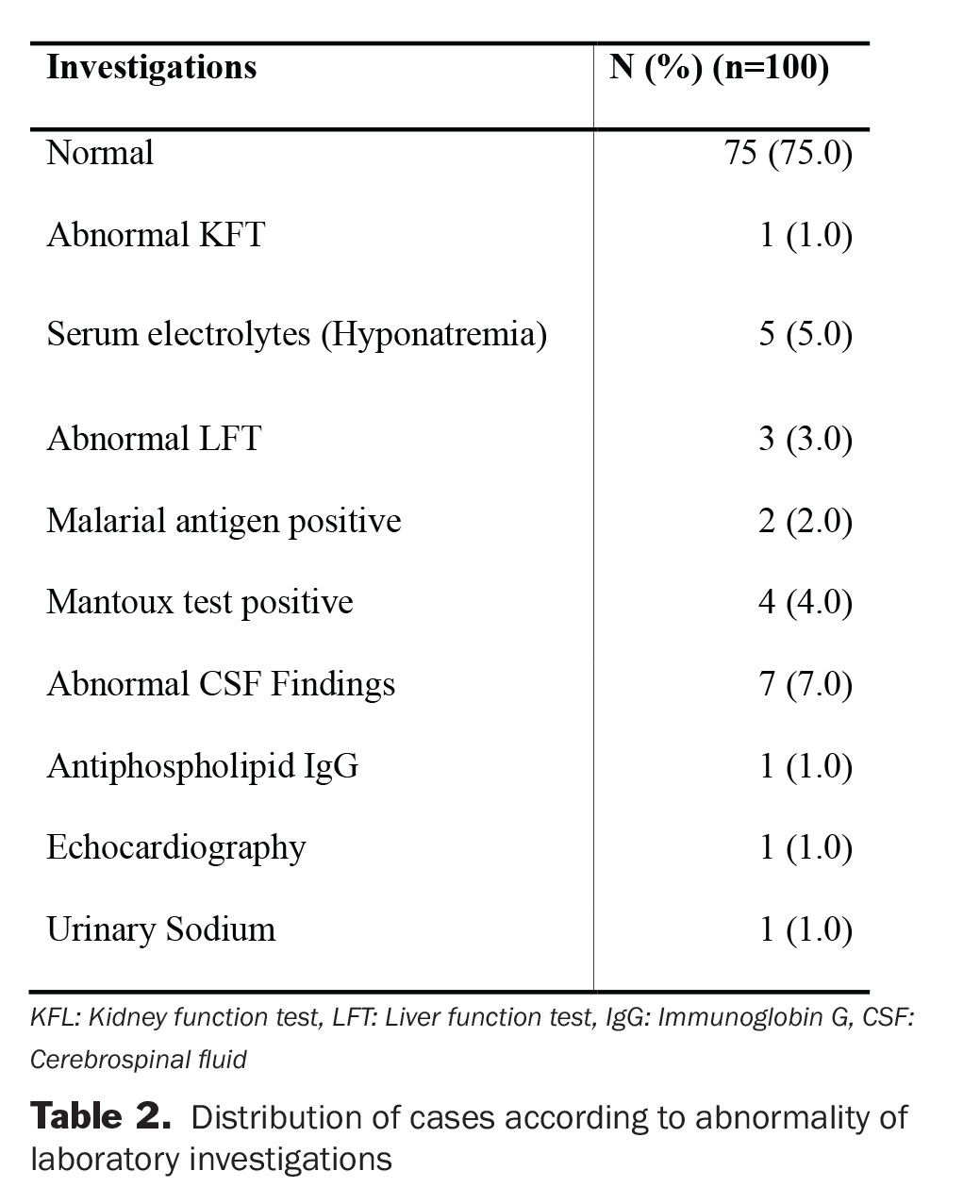 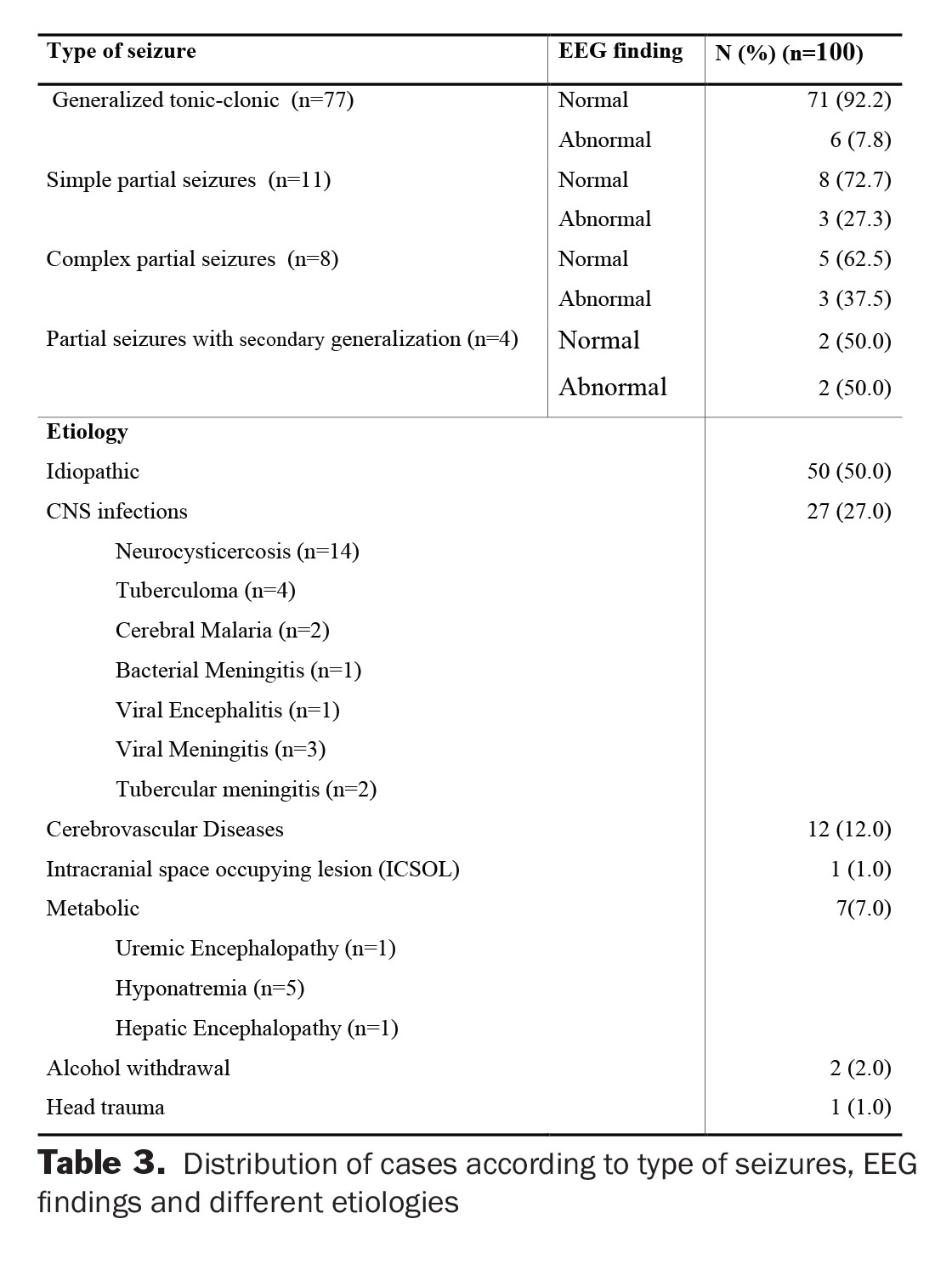 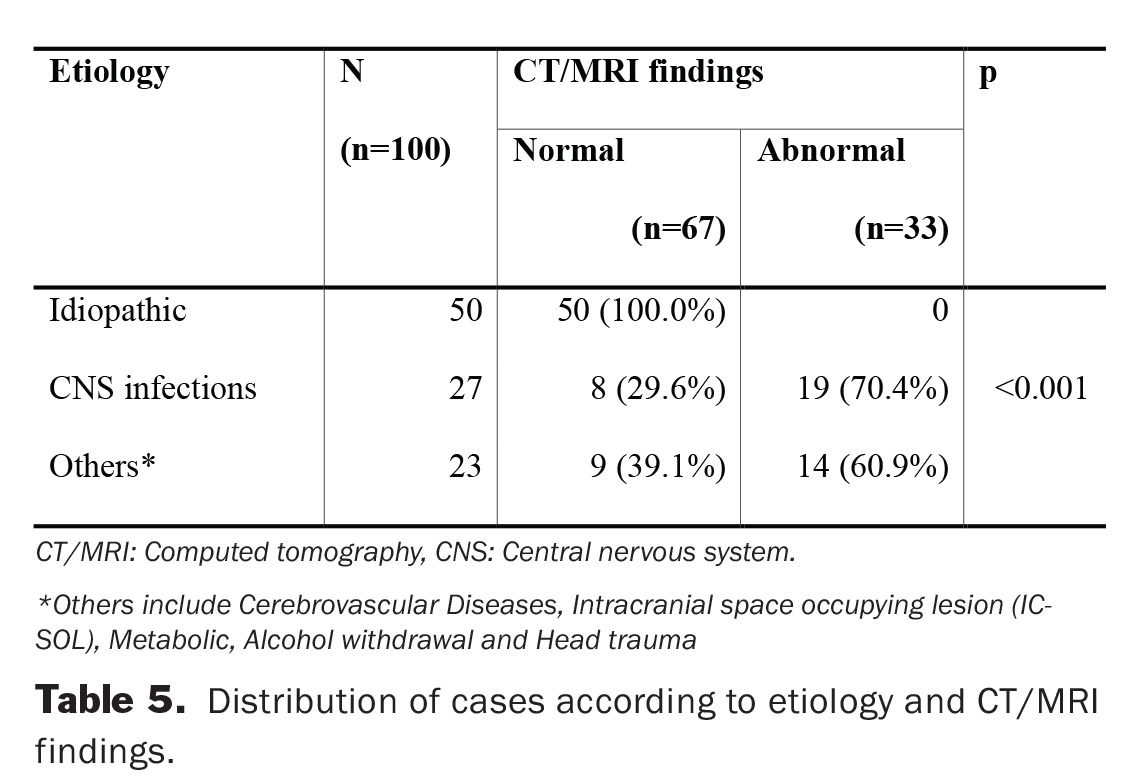 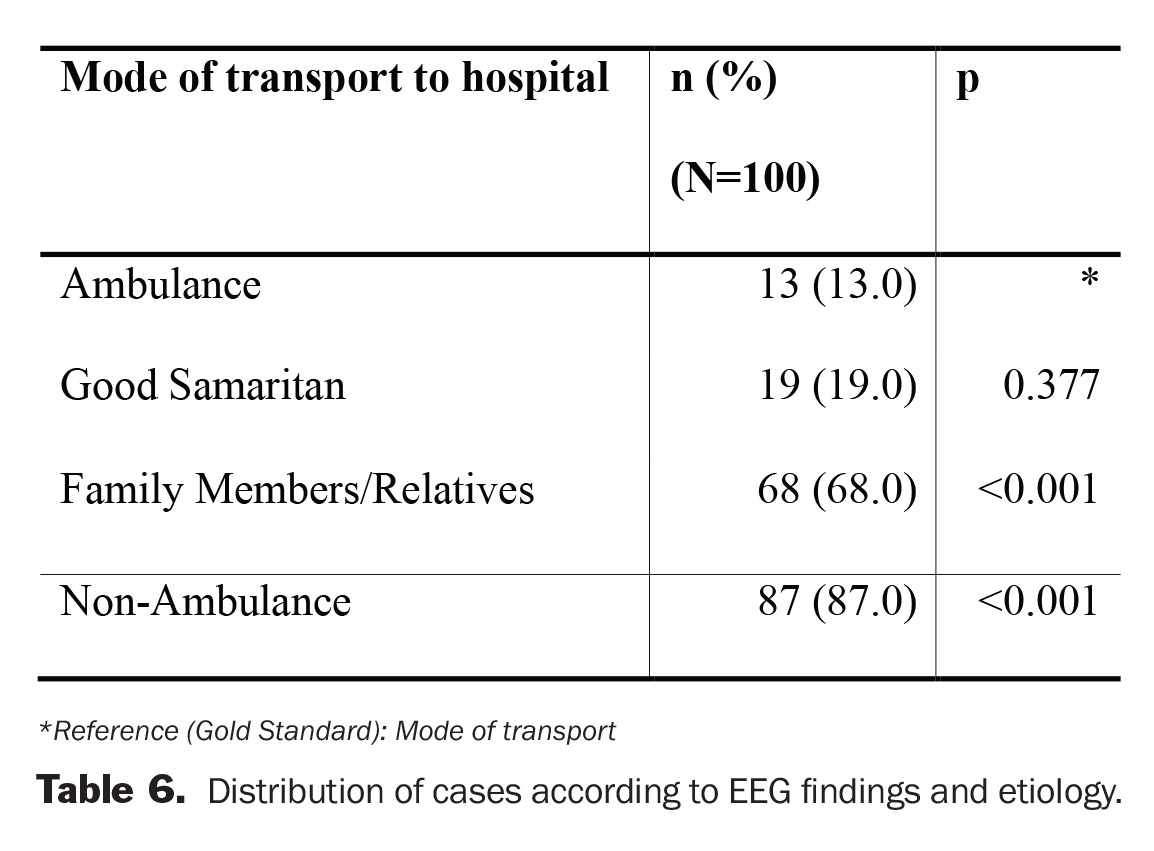 The results of this study have established a number of potentially serious clinical signs and symptoms, test results, and underlying etiologies that suggest many of these seizure patients require urgent care by prehospital professionals.8, 9, 10 However, it is clear from the study findings that few patients are receiving this level of care, given that most arrive in the emergency department via family member or a Good Samaritan. Patients with hyponatremia should be treated with appropriate IV fluids by prehospital professionals. Also other metabolic causes such as hypoxia and hypoglycemia should be investigated. CNS infections such as meningitis, encephalitis, and neurocysticercosis are major causes of seizures in developing countries.11 Such conditions require an emergency response and rapid transport to the hospital via ambulance, with proper fluid therapy and patient monitoring. However universally accessible, 24/7, low-cost ambulance service is a relatively new concept in rural India. Indeed it has only been since January 2014 that such a service was established in the State of Maharashtra.12

In regards to age distribution, the study results are consistent with several other published studies. For example, in a study by Sridharan and Murthy, age-specific prevalence rates were higher in the younger age group, with the onset of epilepsy reported mostly in the patients" first thirty years.13 In another study by Singhvi et al., maximum number of cases (30%) were in the age-group of 21-30 years.14 In regards to gender, at least one published study has demonstrated a similar pattern to the findings here: Pangariya et al. evaluated the clinical profile of 904 cases and found the male to female ratio of 2:1.15

Previous published works have also yielded similar findings for the percentage of GTCS cases. Studies by Koul et al., Kokatt and Verma reported that generalized seizures account for greater than 70% of all seizures.16, 17 Sureka also reported in his study that 82% seizure cases were GTCS.18 In a study by Lefter et al., GTCS were observed in 54% cases, followed by CPS (18%).19 In studies of Singhvi et al., Lefter et al., and Saha et al. also found GTCS as the most common type of seizure.20, 21, 22

Among signs and symptoms, tongue bites appeared more frequently in this study than in other published research. In study by Benbadis et al., out of the 106 cases, 8 cases suffered from oral laceration and tongue bites.23 Ulrich and Maxeiner reported 21% cases of tongue bite whereas in the study it was high (49%).24 Lee et al., reported in their study, typical symptoms observed were visual illusions, fragmentation of thinking, dizziness, nausea, postictal headache, and confusion.25 Sanya stated in a review of epilepsy in elderly that Post-ictal confusion and memory lapses are particularly prolonged in the elderly.26

Precipitating factors were reported less frequently in this study than other studies. Frucht et al. reported that, out of the 400 cases studied, 62% cited at least one precipitant.27 Stress was observed in 30% cases, followed by sleep deprivation in 18% cases, and fatigue by 13% of cases. A study by Spector et al., over 90% of cases had at least one precipitants like stress, depression, and tiredness.28

Halawa et al. studied the association between hyponatremia and seizures in new cases without a history of seizures.29 Of 150 cases reviewed with serum sodium levels of 120-124 mm, 1 case (0.66%) had a seizure, while this study found higher number of cases with hyponatremia (5%). Chow et al. described in a report that status epilepticus occurred in 4 cases with end-stage renal disease on peritoneal dialysis therapy.30

The association between type of seizure and EEG (normal/ abnormal) was statistically significant (p= 0.015; derived from Table 3 using additional analysis of the raw data).

In a study by Pangariya et al. on 904 cases, 41.2% cases had normal EEG findings.31 This is significantly lower than the normal EEG cases observed in this study (85.0%).

Several previous studies have also quantified etiology. In addition, a study by Pal et al. observed that 50.0% cases were idiopathic which was similar to this study.32 Singhvi et al. in their study observed 43 cases (43.0%) with idiopathic etiology with CNS infections being the leading cause in 19 cases (19.0%).33 A study by Medina et al. 6,473 residents were surveyed, 151 cases (2.3%) with epilepsy were identified, out of which 38.0% were idiopathic/cryptogenic, and 37.0% were Neurocysticercosis.34 In this study there were 14.0% cases diagnosed with Neurocysticercosis which has a lower prevalence compared to the previous bibliography. This fact could be due to non-availability of serological tests (EITB) in this study for diagnosing of Neurocysticercosis.

Statistical significance was established via Chi-square Test. Panayiotopoulos et al. observed 84.9% cases with idiopathic etiology had normal EEG whereas in this study 100.0% cases had normal EEG.35 Manoj et al. reported that out of 118 cases of falciparum malaria, EEG was abnormal in 108 (91.5%).36 In this study, we had 2 cases of falciparum malaria, out of which 1(50.0%) had abnormal EEG showing generalized slow wave pattern.

This study had several limitations. First, continuous video EEG monitoring was not available in the tertiary care center which is superior in diagnosis. Additionally, final diagnosis of neurocysticercosis could not be confirmed because of non-availability of serological tests i.e. EITB. Hence, some cases can be missed as serological test are more sensitive and specific than imaging techniques like CT used in this study. Also, the relationship with prehospital clinical care needs is supported only by data on numbers transported via ambulance. Other parameters for prehospital care needs were not determined.

The findings in this cross-sectional observational study demonstrated that seizure patients transported by ambulance to the emergency department were relatively uncommon – they primarily arrived at the hospital by personal means. Seizures presented as GTCS were observed in a high percentage of cases regardless of gender and underlying etiology. Idiopathic epilepsy was the most common etiology while patients presented mostly between 12-24 years of age. Post-ictal confusion, frothing, and tongue bite were the most common associated signs of seizure when the patients arrived at the emergency department. Given the clinical test results and diagnosis of these cases, the data suggests that a much larger percentage of these seizure patients would have benefited from ambulance response, transport, and prehospital treatment. It is also important to be aware of the urgency of attention to ambulance response for young patients because a rapid response can improve chances of survival and positive prognosis for reversible cases.

Conflict of interest: None

Ethical approval: The study was approved by the Ethics board of N.K.P. Salve Institute of Medical Sciences and Research Centre, India.