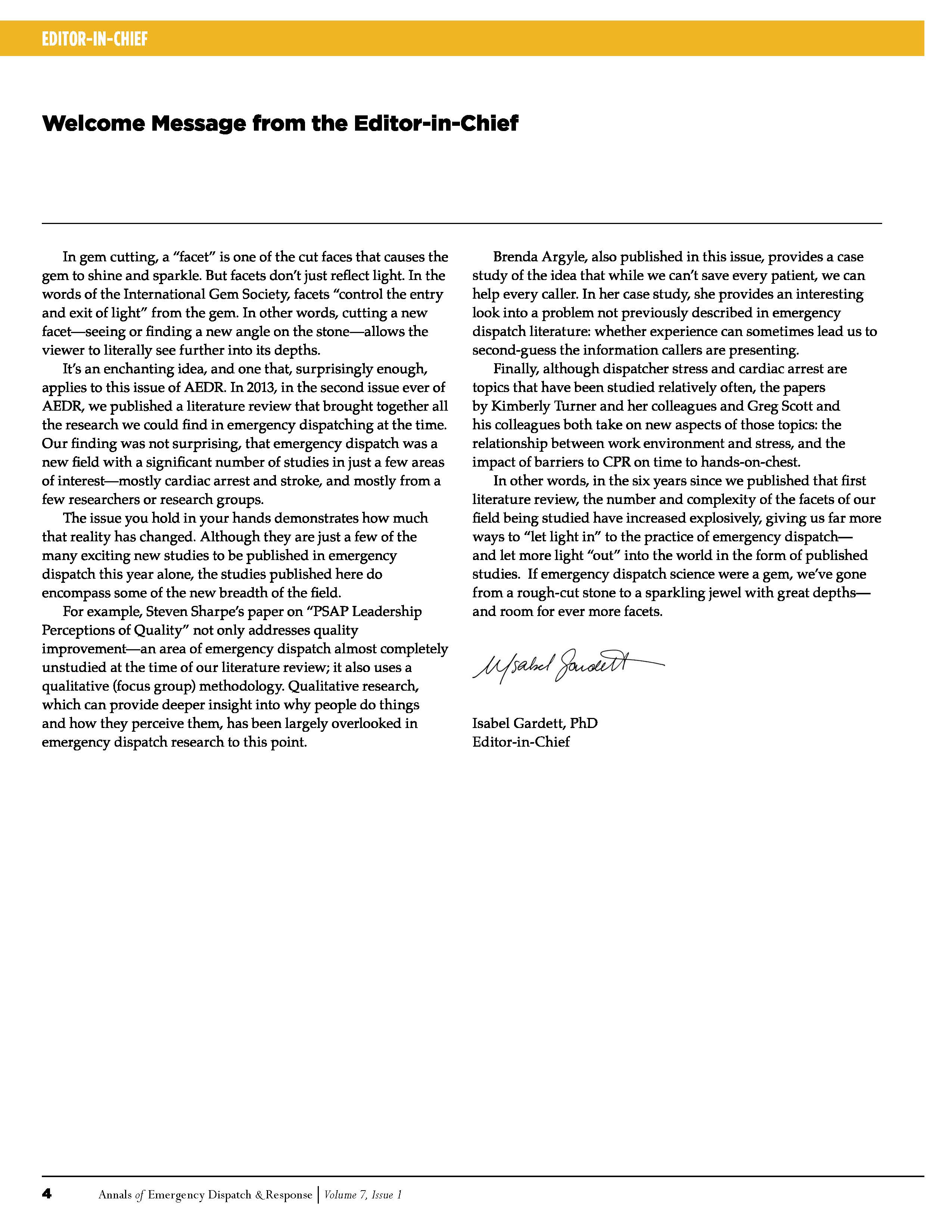 Message from the Editor-in-Chief

In gem cutting, a "facet" is one of the cut faces that causes the gem to shine and sparkle. But facets don't just reflect light. In the words of the International Gem Society, facets "control the entry and exit of light" from the gem. In other words, cutting a new facet—seeing or finding a new angle on the stone—allows the viewer to literally see further into its depths.

It's an enchanting idea, and one that, surprisingly enough, applies to this issue of AEDR. In 2013, in the second issue ever of AEDR, we published a literature review that brought together all the research we could find in emergency dispatching at the time. Our finding was not surprising, that emergency dispatch was a new field with a significant number of studies in just a few areas of interest—mostly cardiac arrest and stroke, and mostly from a few researchers or research groups.

The issue you hold in your hands demonstrates how much that reality has changed. Although they are just a few of the many exciting new studies to be published in emergency dispatch this year alone, the studies published here do encompass some of the new breadth of the field.

For example, Steven Sharpe's paper on "PSAP Leadership Perceptions of Quality" not only addresses quality improvement—an area of emergency dispatch almost completely unstudied at the time of our literature review; it also uses a qualitative (focus group) methodology. Qualitative research, which can provide deeper insight into why people do things and how they perceive them, has been largely overlooked in emergency dispatch research to this point.

Brenda Argyle, also published in this issue, provides a case study of the idea that while we can't save every patient, we can help every caller. In her case study, she provides an interesting look into a problem not previously described in emergency dispatch literature: whether experience can sometimes lead us to second-guess the information callers are presenting.

Finally, although dispatcher stress and cardiac arrest are topics that have been studied relatively often, the papers by Kimberly Turner and her colleagues and Greg Scott and his colleagues both take on new aspects of those topics: the relationship between work environment and stress, and the impact of barriers to CPR on time to hands-on-chest.

In other words, in the six years since we published that first literature review, the number and complexity of the facets of our field being studied have increased explosively, giving us far more ways to "let light in" to the practice of emergency dispatch— and let more light "out" into the world in the form of published studies. If emergency dispatch science were a gem, we've gone from a rough-cut stone to a sparkling jewel with great depths— and room for ever more facets.