Introduction: The extent of fire emergencies in our communities is of great concern, not only to the public, but to the nation's fire departments, whose role is not only to respond to them, but to mitigate and, even earlier, to prevent them. The variety of types of fire-related emergencies reported to 911 is of significant interest to this ongoing mandate.

Objectives: The aim of this study was to characterize the distribution of calls handled using a Fire Priority Dispatch System (FPDS™) in the studied agencies.

Conclusions: Detailed knowledge of the distribution of call types and priority levels can inform fire service planning and operational decisions, including resource allocation and purchase of new apparatus. In the communication center, knowledge of median call type distribution provides the opportunity to track trends and patterns over time and to compare the call distributions of similar agencies.

The extent of fire emergencies in our communities is of great concern, not only to the public, but to the nation's fire departments, whose role is not only to respond to them, but to mitigate and, even earlier, to prevent them. The variety of types of fire-related emergencies reported to 911 is of significant interest to this ongoing mandate. Inherent in this effort is to know the actual numbers and, more specifically, the frequency of the various types of fire response calls that must be evaluated by 911 calltakers, then prioritized, dispatched, and managed remotely until firstarriving crews take command of size-up, scene deployment, and suppression.

Each FPDS Chief Complaint protocol (Fig. 1) handles one call or event type, allowing the calltaker to ask specific questions relevant to the nature of the call and provide safety instructions specific to the situation type or event.2 The calltaker selects the Chief Complaint based on the caller's response to the Case Entry question, "Okay, tell me exactly what happened." Caller interrogation using the FPDS is based on three priorities: life safety, incident stabilization, and property conservation. Questions dealing with potential life safety issues (whether for callers, bystanders, or responders) are asked first, and other questions elicit information that influences the selection of an appropriate type and level of response: structure types, size of the fire if in brush or grass, and so on.

Six priority levels (Figure 2) are used to define the relative urgency of the response, and several hundred determinant codes are used to describe the specific nature of the event. The local fire department can use these universal codes to craft its own response plan, including an agencydefined response to each determinant code, based on its individual organizational practices, policies, procedures, and geo-political realities.

Figure 2 illustrates the interrelationship and function of the six priority levels in the FPDS. The highest priority level, the ECHO level, represents the most time-critical cases: those that require an immediate response by the absolute closest available (and capable) responder and lifesaving pre-arrival instructions provided over the phone to the caller. DELTA- and CHARLIE-level cases involve the response of multiple units for the incident and the option of running HOT (lights and sirens) or COLD (no lights and sirens). The decision whether to run HOT or COLD is made by the local fire administration prior to the implementation of the FPDS. DELTA- and CHARLIE-level cases also indicate an immediate need for the fire department and multiple personnel due to their high likelihood of escalating in severity and/or number of victims. BRAVO- and ALPHA-level cases primarily call for single-unit responses, with BRAVO going HOT and ALPHA going COLD. These incidents require firefighting operations but make fewer resource demands on the fire department. OMEGA (O) cases receive little or no response from the fire service. Often, incident information is collected, prioritized, and passed to other agencies, and the fire department never responds. To date, no studies have characterized the distribution of FPDS Chief Complaint protocols and priority levels.

The objective of this study was to characterize the distribution of calls incident types handled using the FPDS in the studied agencies.

MEDIC, PG County, Guilford Metro and Metro Nashville agencies all serve populations between 500,000 and 1,000,000 people. All four agencies cover areas of approximately 500 square miles, with Guilford Metro covering 789 square miles. These agencies are primary public safety answering points (PSAP) and dispatch Fire, EMS, and Law Enforcement responses—with the exception of MEDIC, which dispatches Fire and EMS responses only and is a secondary PSAP.

The study sites were included on the basis of being current users of the FPDS® (version 5.0, August 2009 release) and also Accredited Centers of Excellence with the IAED. The deidentified data were a convenience sample of all fire dispatch data available during the study period from the agencies being studied; the sample involved three years (2011-2013) of data collected using ProQA® (software version of FPDS) from each site. The specific data elements which were extracted from these ProQA reports included, among others: the Chief Complaints (CCs) selected by the EFDs using the ProQA software, the priority level assigned to each call, and the Determinant Descriptors selected for each call.

The primary endpoints were the frequencies distributions of calls, categorized by the CCs and Priority Levels, as selected by the EFDs in the nine centers.

STATA software for Windows® (STATA Statistical Software: Release 13.1 ©2013, StataCorp, College Station, TX, USA) was used for data analysis. Descriptive statistics such as frequencies and percentages were used in the tabulation of incidents of calls by CC, and Priority Level, by agency, and overall.

Protocol 52 (Alarms) was by far the most commonlyused FPDS Chief Complaint protocol in the agencies studied. Somewhat unexpectedly, Protocol 67 (Outside Fire) was used slightly more frequently than Protocol 69 (Structure Fire), although structure fires, in the authors' experiences, are often perceived to be the most common fire service calls after alarms. This finding is especially interesting given that the agencies studied were almost all located in the Eastern states of the United States, with no agencies studied from the Western states. Typically—according to sources in multiple fire service agencies—structure fires are believed to be more common in Eastern states than in Western states (due to older structures, denser population centers, and other factors), so this study suggests that, if Western states were included, outside fires might be found to be even more prevalent than shown here.

Other Chief Complaint protocols that fell higher in the distribution list than expected were Protocol 53 (Citizen Assist/Service Call) and Protocol 60 (Gas Leak/Gas Odor). Citizen Assist calls are part of the larger trend toward using fire responders in medical cases, often as first responders but sometimes, as with Citizen Assist calls, simply to provide manpower or equipment.3, 4 More critically, given the occurrence of several recent high-profile building explosions, the position of Protocol 60 in the top seven Chief Complaints in the agencies studied may point to a potentially dangerous trend that should be studied further. Longitudinal studies of gas leak call prevalence and outcome, for example, could help confirm or refute the importance of this finding.

The overall median percentage of BRAVO- and CHARLIE-level calls was nearly identical (35.3% and 35.0% of total call volume, respectively), and although this varied somewhat by agency, these two levels combined made up more than 70% of call volume in every agency studied. This is particularly interesting given that 120 of the 278 total Determinant Descriptors in the FPDS (43.2%) are DELTAs, while the CHARLIE (n=46) and BRAVO (n=60) levels combined only contain 106 (36%) of the total available Determinant Descriptors. This might be in some part explained by the fact that DELTA-level calls often deal with high-priority incidents that may require specific, unusual response vehicles, apparatus, or teams. As a result, these DELTA call types are often broken down into more-specific types by Determinant Descriptor. For example, all but one of the 12 DELTA codes on the Structure Fire Protocol classify various types of structures—but all are structure fire calls. The number of structure fires, then, essentially dictates the number of DELTA determinants on the structure fire Protocol 69, since each determinant is simply a different type of structure fire. The same is true of a number of other protocols. CHARLIE and BRAVO determinants, however, more often describe different types of events, rather than different variations on the same event type.

The study findings demonstrated that detailed knowledge of the distribution of call and event types is possible, using the FPDS. This added information can assist fire services with planning and operational decision making, including call response need, crew resource allocation, and even the purchase of new equipment and apparatus (for example, the finding that Outside Fire calls are even more common than Structure Fire calls suggests a potential need for more apparatus specific to outside fires, such as a brush truck). In the communication center, knowledge of call type distribution provides the opportunity to track trends and patterns over time and to compare the call distributions of similar agencies. Knowing which call types are common and which are rare can drive more effective training that focuses on ensuring calltaker proficiency with common calls and preventing loss of familiarity with call types that are rare but potentially serious if mishandled.

An increase in the use of data to drive decision-making in the fire service has encouraged fire dispatch centers to adopt dispatch practices that include a standardized process for gathering key information and assigning a specific FPDS code (Determinant Descriptor). These specific codes can help fire services track their incident and call types with precision.

This study represents a baseline for future studies by classifying the distribution of FPDS Chief Complaint protocols and priority levels in nine accredited agencies. Alarms was the most frequent Chief Complaint protocol used, followed by Outside Fire, Structure Fire, Citizen Assist/Service Call, and Electrical Hazard. BRAVO was the most frequent priority level, followed closely by CHARLIE, then DELTA. Future research should examine differences in distribution frequency among agencies and geographic regions. 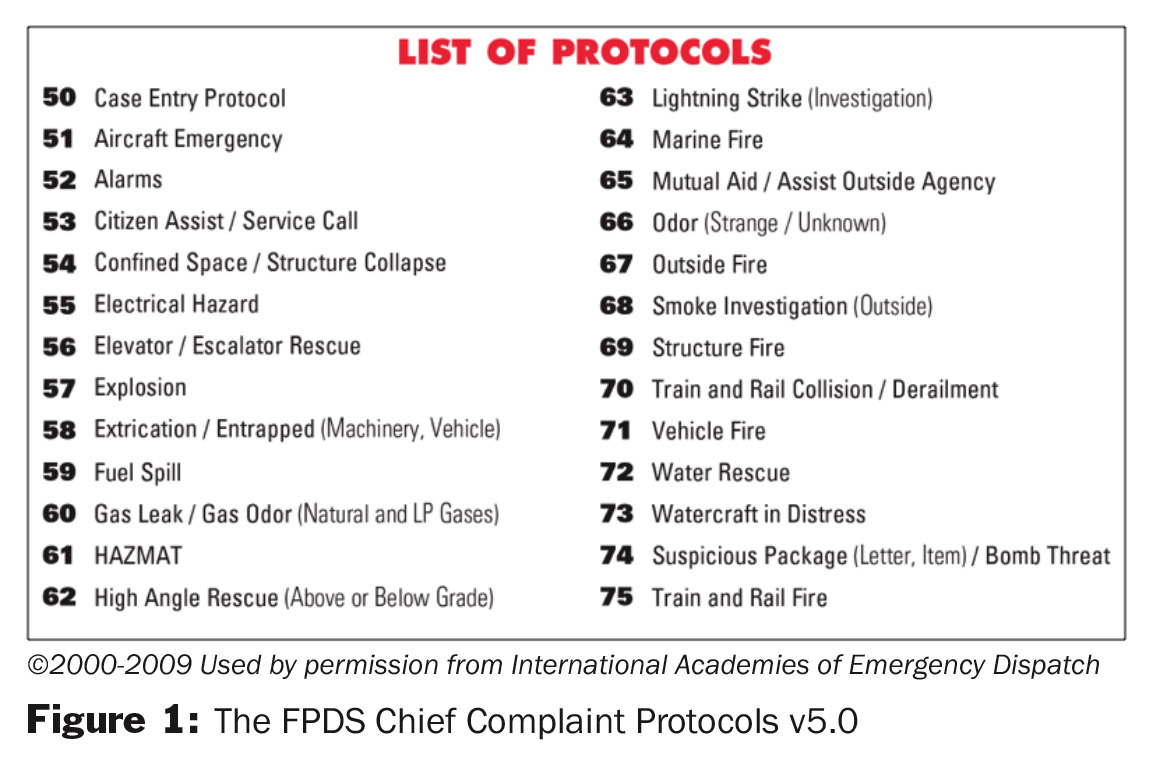 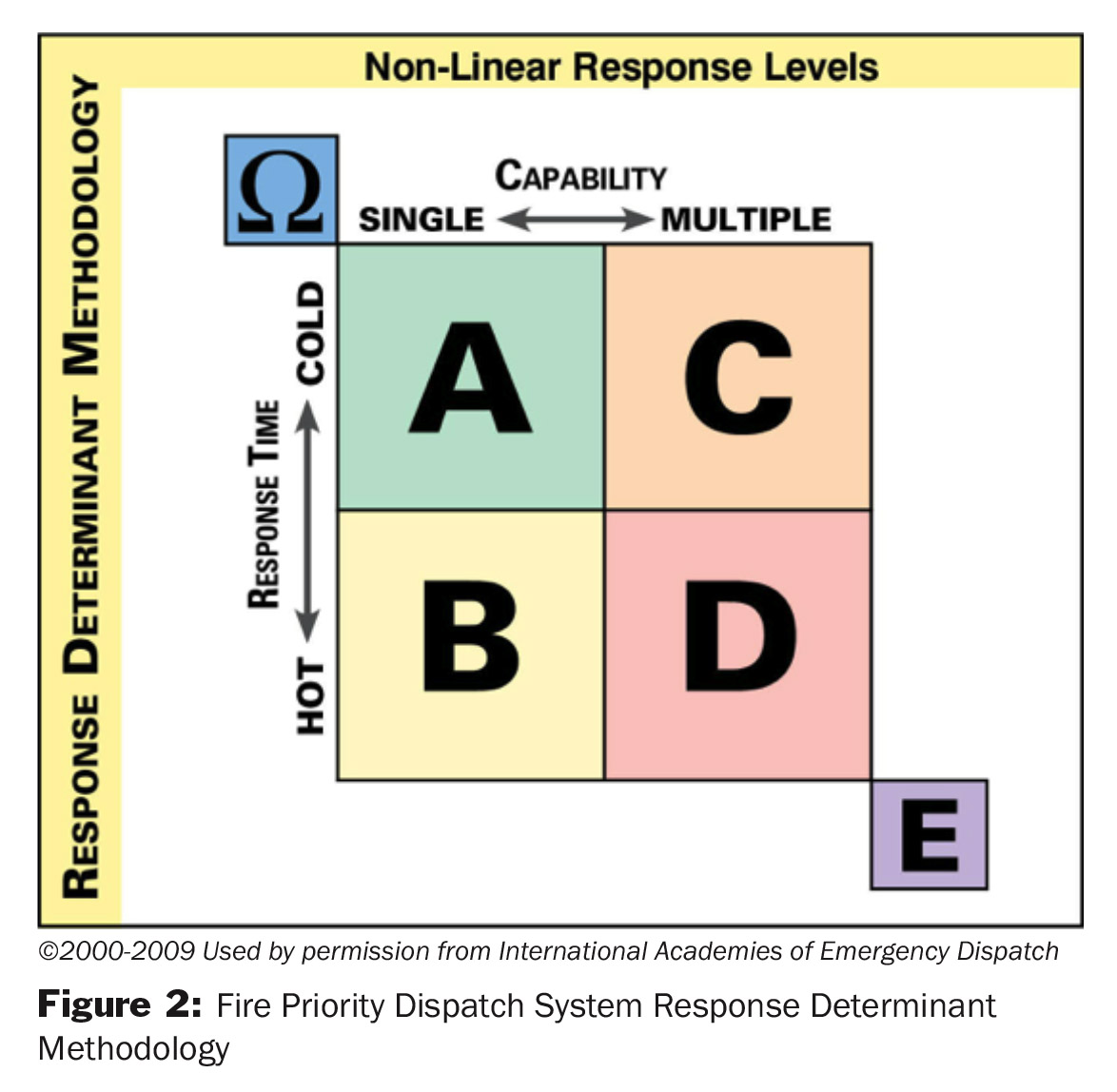 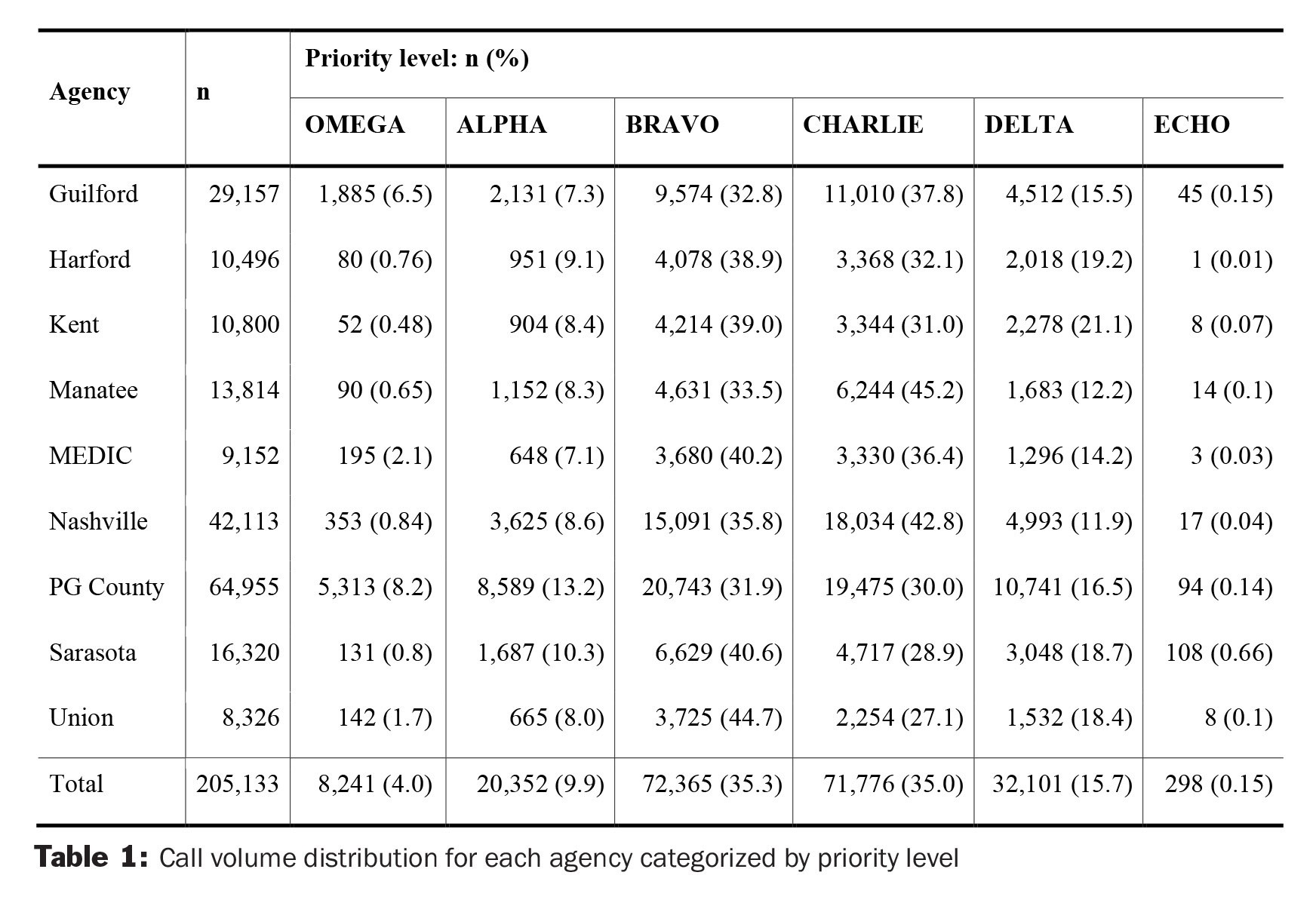 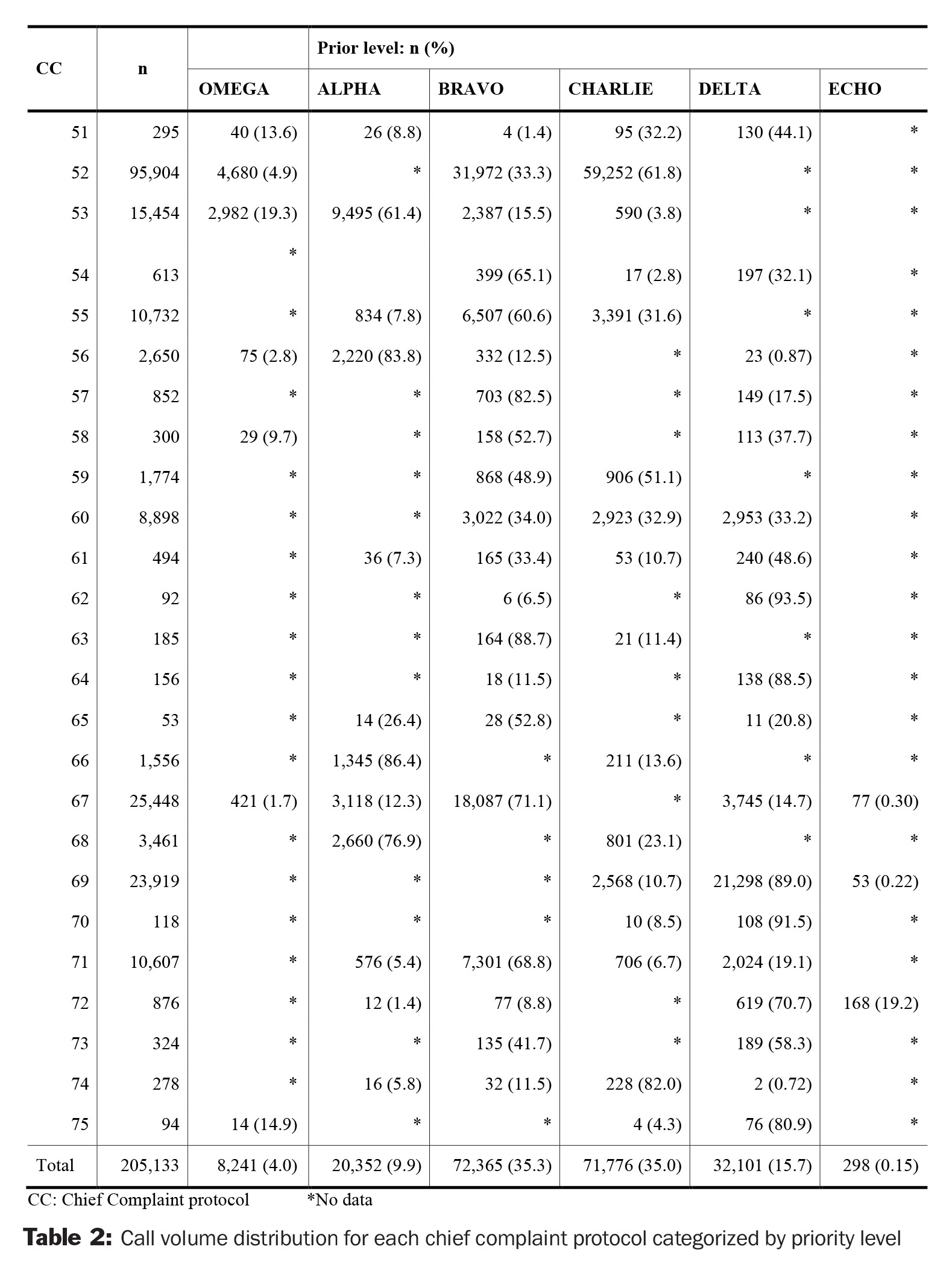